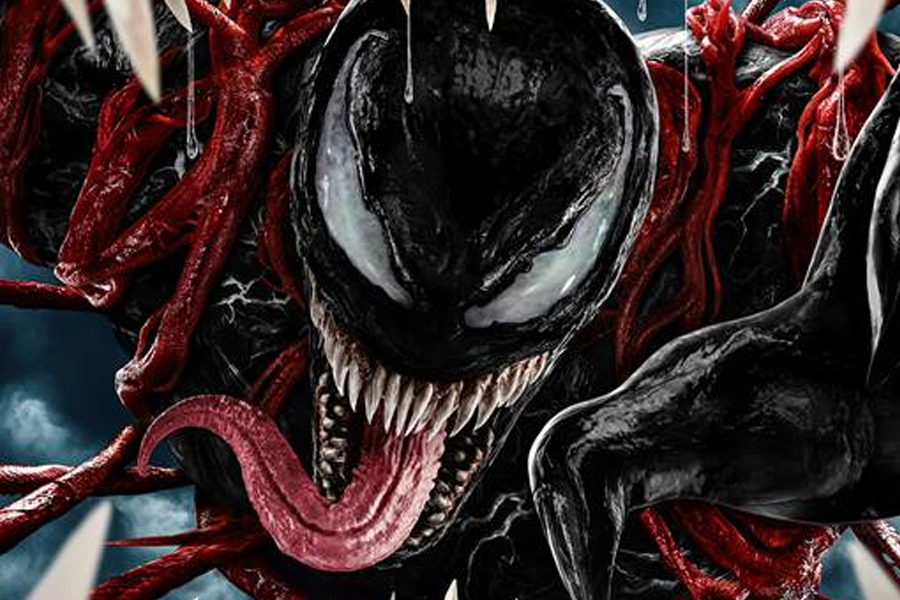 The Plot: Journalist Eddie (Tom Hardy) has come to some sort of living arrangement with his brain-munching symbiote buddy Venom (also Hardy). Though, Venom is on a strict diet for now, frustrated at Eddie’s lack of enthusiasm for hunting down bad guys. After a close encounter with the imprisoned Cletus (Woody Harrelson), Venom gets his answer when Cletus gets infected and becomes symbiote Carnage. The stage is set for a showdown, with Eddie’s frustrated ex-fiancee Anne (Michelle Williams) between them…

The Verdict:  Venom: Let There Be Carnage is sadly mind-numbing and deafening enough to make one lose faith in the modern superhero film. If ‘Avengers: Endgame’ was an outstanding three-course meal at a Michelin-starred restaurant then this undesirable Venom sequel is the sloppy, stale cinematic fast food hurriedly put together and thrown at the audience with reckless abandon. Not much of it will stick on the wall, with the rest of the gooey mess sliding into the cinematic sin bin where it belongs. Ouch. It really is that bad.

The first Venom film was already quite poor, so director and performance capture genius Andy Serkis had his work cut out to raise it up a level and come up with that rare thing – a sequel that is better than the original. Unusually for the talented Serkis, he’s failed miserably here. Hopefully, he can put this sorry chapter behind him and do what he does best – create meaningful, memorable digital characters through technology. You won’t find that here, as Serkis has leaned into Tom Hardy’s worst instincts about the dual personalities of Eddie/Venom. Fine actor Hardy may be, but he’s not much of a writer. His story with Kelly Marcel tries desperately to establish some sort of working relationship between Eddie and his at-times dominant symbiote Venom. Instead, it resorts to lazily-scripted jokes about chickens and a chocolate shortage in the local grocery store (really?). There’s more.

The plot is stripped back to the simplest possible outcome: Eddie/Venom must face off against serial killer Cletus/Carnage and that’s basically your lot. Sit back and watch Hardy and Harrelson (both on autopilot) thrown about like ragdolls as they disappear into a mass of bashing pixels, toned down somewhat for ratings reasons. Not much in the way of soul-searching for this Jekyll & Hyde split personality or really letting Venom off the leash and doing what he wants. That would just be too sophisticated, wouldn’t it? The interface between Eddie/Venom is clunky and shows little sign of progress in character development, with Serkis rushing through scenes and frantic action set pieces in the hope that nobody will notice. Carnage is just a red photocopy of Venom, rather than a formidable foe. Michelle Williams is wasted with a nothing role that requires her to just show up at the wrong moment. It’s embarrassing for all concerned.

Hardy already has an idea for a third film – possibly hinted at in the credits stinger but maybe someone in Sony should tell him to put that particular idea back in the box. The idea of Venom running riot in another story could infect it with this same laziness and blatant lack of self-awareness. Venom: Let There Be Carnage will do boffo box office of course, as it has already done in the U.S. but that’s not any reason to see it unless you’re a die hard Marvel fan.