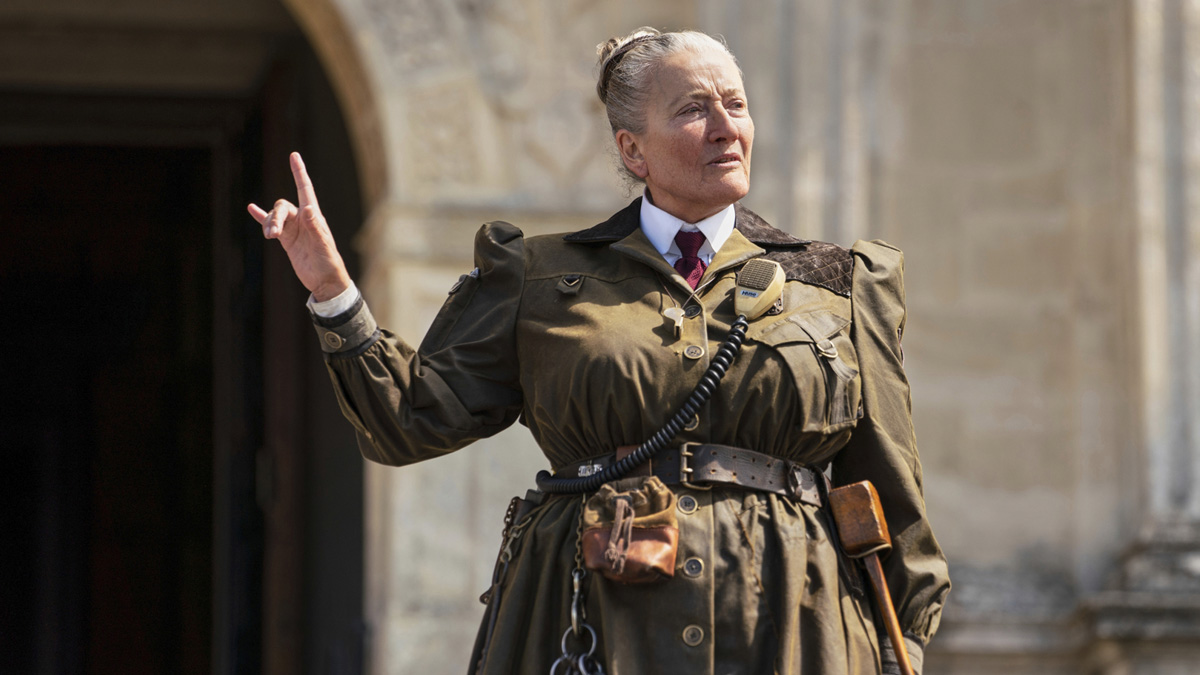 The Plot: Young Matilda (Alisha Weir) is far smarter than her snotty parents Mr & Mrs Wormwood (Stephen Graham and Andrea Riseborough). They’re too self-absorbed to even notice her sensitive nature and love of books. Matilda’s imagination and ability to weave a story captures the attention of her neighbours and more so when she joins a new class at school. Introduced to the class and looked after by the kindly Miss Honey (Lashana Lynch), Matilda finds a kindred spirit who recognises her maturity for her age. Standing in the way of progress though is the monstrous headmistress Miss Trunchbull, a former athlete who likes nothing more than tossing children over the school wall – by the pigtails…

The Verdict: Remaking a well-regarded film from 1996, itself based on a much-loved children’s book, is undoubtedly fraught with danger. Adding a musical element to it also poses some doubt in the mind of a potential viewer, wondering whether it’s an appropriate fit for a colourful tale of a Carrie-like telekinetic child facing up to an adult-sized school bully. Carrie bizarrely had its own short-lived musical version, so the grandly-titled Road Dahl’s Matilda The Musical sets out its stall early on in distinguishing itself from its predecessor. It’s based on not only Dahl’s book but also the 2010 stage musical which began life with the Royal Shakespeare Company of all things before finding success treading the boards on the West End and ultimately Broadway. That level of success is evident in the translation to the film version, which takes a familiar story and breathes new, vibrant life into it.

Roald Dahl’s novels often had a wickedly dark (but not too dark) sense of humour, as relatable to adults as to children in the way they portrayed their rogues gallery of characters. Matilda is one of his most interesting creations, a seemingly ordinary girl with an extraordinary imagination and ability to understand adults. Dennis Kelly’s adaptation into a musical keeps the truth of the character intact, the songs used to express the emotions which very few show interest in. The film therefore rests heavily on the young shoulders of Dubliner Alisha Weir, who went through several auditions before eventually landing the part. She’s quite a revelation in only her third feature role, bringing an inner strength and quiet resolve to the character of Matilda that goes beyond being cutesy and more like a mini-revolution waiting to burst forth. She holds the film up with ease and breezes through it with the confidence of a professional. She’ll be going places.

That’s not to say that Weir overshadows the adult actors, who bring some added boo-hissable fun to the proceedings. Stephen Graham and Andrea Riseborough, often known for their commitment and intensity to their roles, are a hoot as Matilda’s obnoxious parents. Clearly relishing the chance to kick back and play something broad and funny, there’s just the right amount of them in the film to pepper it up a bit. The real monster here though is a nearly unrecognisable Emma Thompson as Miss Trunchbull, stomping about like a never happy playground Godzilla and dismissing children as maggots that should be neither seen nor heard. It’s a very funny and mildly menacing performance, pitched at the right tone for a Roald Dahl villain but with a sense of pathos about her too. Between this and Good Luck To You, Leo Grande, the screen veteran is having quite a year it seems. Pride director Matthew Warchus brings great energy and fizz to the musical numbers, which serve a narrative purpose rather than come across as inserted for music’s sake. A musical that deserves to be so then.

Roald Dahl’s Matilda The Musical comfortably sidesteps the remake issue and stands defiantly like its lead character on a school desk, ready to charm audiences of generations new and old once more. It really is that delightful and is an ideal, toe-tapping, pre-Christmas treat for all the family.