The Plot: Scotland, 1996. At a Catholic school, a group of teenage girls are preparing to travel to Edinburgh to compete in a choir competition. That’s not what is on their minds though. They intend to paint the town red and meet lots of boys. Having skived off from their choir practice in the city, Orla (Tallulah Greive) and her best friend Finnoula (Abigail Lawrie) along with Manda (Sally Messham), Chell (Rona Morison) and Kylah (Marly Siu) head to the pubs and nightclubs to check out the local talent…

The Verdict: George Bernard Shaw once wrote that ‘Youth is the most beautiful thing in this world – and what a pity that it has to be wasted on children!’. That’s a sentiment that the wee lovely lassies in Our Ladies would no doubt strongly disagree with – using fruity language and that colourful Scottish brogue of course. For they are not children anymore, but young women finally stepping out of adolescence and onto the adult stage to see where the next act of their lives will take them. Our Ladies, a somewhat ironic title, is less a coming-of-age story (we’ve had enough of them) and more of a transitional story about how people change with life experience, affecting the dynamic of female friendship but not the strong bonds between them. The result is a somewhat spicy but surprisingly tender tartan treat about girl power during that ‘Cool Britannia’ time period when the Spice Girls were all the rage.

It’s based on the Alan Warner book The Sopranos, which for obvious reasons couldn’t be used as the title. Besides that reason, there’s little heavenly singing going on here anyway. These good Catholic girls are leaving behind spiritual enlightenment for the earthly pleasures of partying, drinking and getting laid. On the surface, that’s not much of a plot to hang on a nail and hope it sticks sufficiently enough to entertain and amuse audiences for 106 minutes. The meandering plot is indeed thin and it’s not particularly clear what the purpose of all this Scots-flavoured hedonism is until the closing moments, which tips its tartan beret to American Graffiti. Writers Ross Anderson, Tony Atherton and Eve Austin (who also plays Kay, the prim head girl with a secret) fill in the empty pockets of plot space by focusing more on the characterisation – which is where the film ultimately scores well.

A youthful slice-of-life film like this is going to rely heavily on its cast to prop it up. The young cast of relative unknowns have a great onscreen rapport that doesn’t come across as workshopped in an acting class. They have an easy chemistry together that in turn translates into relatable characters that resemble, you know, real people rather than movie characters. Tallulah Greive is a particular stand-out as the main character Orla, maintaining an inner strength for her character even while she’s dealing with the after effects of a ravaging medical procedure. Director Michael Caton-Jones has been a sporadic director, moving from great films like Scandal and Memphis Belle to, er, the long-forgotten Basic Instinct 2. He’s not the obvious choice for a film about girl power and female friendship, but he does bring a good eye for working with his cast and getting the most out of them. There is a youthful exuberance to the filmmaking too, with Caton-Jones making good use out of the soundtrack of that era and Edinburgh’s street life – without being overly nostalgic for a lost time before social media took over. What it lacks in depth and meaningful relationships with men, Our Ladies makes up for in hearty laughs, good characterisation and the reliable support structure of female friendship. Their youth is not being wasted after all. 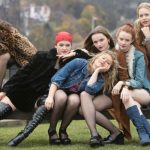