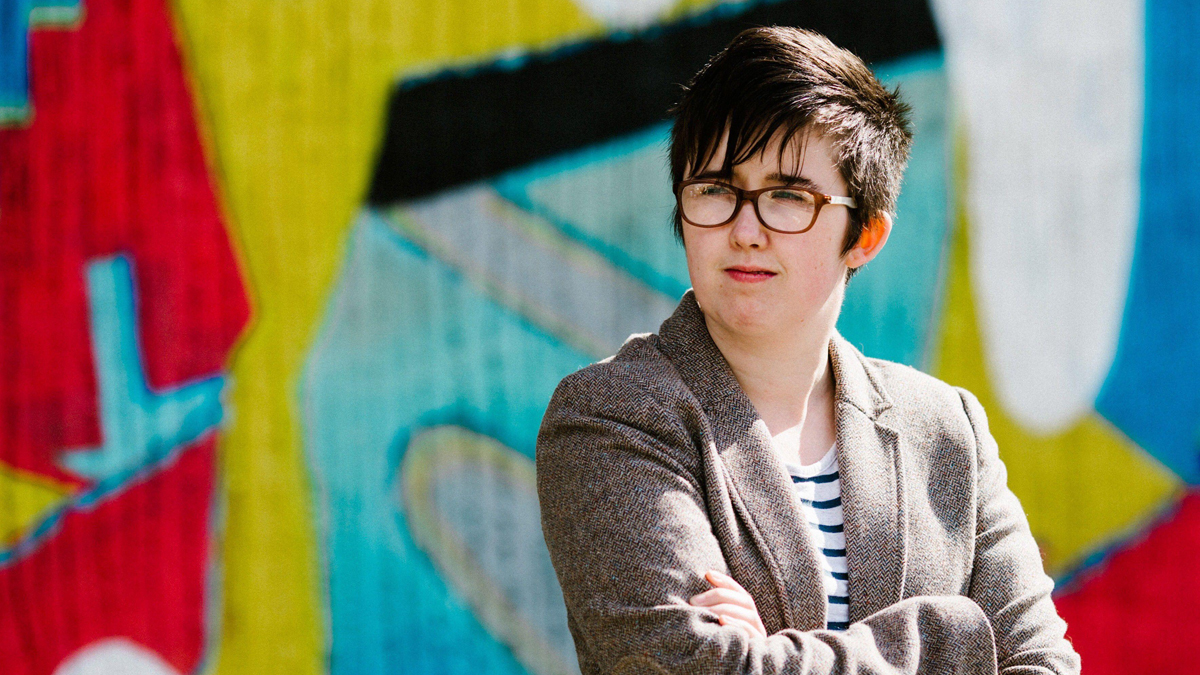 In 2019, the award-winning reporter Lyra McKee was shot dead during a riot in Derry. She was just 29 years old and was doing her job, covering a news story. A few hours later, she was the new story. Lyra McKee devoted much of her career to writing about intergenerational trauma and the consequence of violent deaths on those left behind. Lyra’s family now grieves and has become one of those families she used to write about. BAFTA-winner Alison Miller introduces us to the writer, the LGBTQ+ activist, a warmhearted woman with endless good humour. We spoke with Alison  about making the documentary and her dear friend, Lyra.

You were friends with Lyra McKee. Did you have any doubts when her family asked you to make the documentary?

I had huge doubts. I’ve made a lot of challenging films here. I’ve made a film about The Disappeared, which was hard, but I’m not frightened about making difficult films. This was so personal I thought, what if I do this wrong? I put a lot of pressure on myself, thinking, how do I do it justice? Lyra’s family and her partner Sarah pointed out that if anything happened to me, Lyra would have been shouting down the streets, and I realised they were right because we were close friends. I decided to do it, but I had so much support from Lyra’s family. Colleagues were there every step of the way. We were hard on ourselves, but we had to be because we had to do Lyra justice. Chloe Lambourne is an editor who worked on the Oscar-winning, For Sama; she was living with me in Belfast and working on another project. Chloe and Lyra were due to meet before Lyra died. I knew they would get on; they had such a great sense of humour, and Lyra was excited to meet Chloe. After Lyra died, Chloe felt she had to work on the documentary, which was amazing because she is an incredible editor. But even with great people around me, I still felt huge doubts. Every time I looked at the camera, I doubted what I was doing, but I was also in this unique position that I had access to Lyra’s mother, Joan, who had shied away from cameras. At the funeral, there had been recording restrictions with Joan; she didn’t want to be filmed at all. When we sat down and talked about making the film, Joan said she was happy to be filmed by me. I wanted her to know that she didn’t need to be in the documentary and that I was happy to work around her, but she wanted to do it for Lyra. Whenever Joan was brave enough to be on camera and talk about her daughter, I thought to myself come on, pull yourself together, this woman has just lost her daughter, and here she is, willing to do this. There is a scene in the film where Lyra’s mum and her sister collect an award that Lyra won. It was just three weeks after her murder, and her mum couldn’t breathe with grief. It’s an incredibly raw moment that I was invited to film and was privileged to witness. As a documentary filmmaker, I always feel that you should check yourself out because when you’re invited to film something with people who trust you, it’s a big moment for them. At that moment, you are purely the filmmaker; you have to remove yourself from the situation in your mind.

You have to detach yourself at some point because it is your job, but how do you find the balance when you are so invested?

Making the film was difficult because of the structure. The challenge with the film was to lay down three layers; the first layer was to try and bring the audience to Lyra, Take the audience back in time and grow up with Lyra. The next layer was laying the ongoing quest for justice and the grieving process for the family and Sara, Lyra’s partner. The third layer was the landscape of the North, where I wanted to take the audience to the North to see what was happening then and now because that is a massive part of Lyra’s work. Weaving those three layers together to create that narrative was difficult. We also had the enormous task of selecting which of Lyra’s writing to include in the film. I was lucky to have Ed Watts, who worked with Chloe on For Sama, onboard. I posted him Lyra’s anthology, and he absorbed the whole book. He had a tough job because everything Lyra had written is incredible. David Holmes scored the film; not only was I honoured, but never in my wildest dreams did I think I would work on a film with David Holmes. He called me one day and said he wanted to do the soundtrack; he didn’t want money. It wasn’t about the money; he wanted to do it for Lyra. He felt every scene, every transition. All these things kept it easy because you have to focus on the challenges of making their film. It was harder towards the end. When it came to editing the film, we listened to Lyra’s voice almost every day, and when it came to cutting the funeral scene together at the end, Chloe just fell apart. There were a couple of days when she just had to walk away; she said we spent all this time bringing Lyra back to life, and now she was finding it very hard to say goodbye. When we finally finished the film and played it to the family, the realisation hit us; we were done. We worked so hard to get it right, get the structure right and all the technical stuff with a small but dedicated team, but playing it back was harder than any of that. We have to detach to get a job done, but suddenly it’s finished, you share the documentary, and you suddenly wake up thinking, did that happen? She isn’t here anymore. So much of this has been hard, but I wanted people to know that Lyra was funny. There’s a scene in the documentary where she enrols to do a strictly dancing thing for charity. Every time I see that clip, I almost die laughing because she had a unique rhythm, shall we say, and she used to say, “I’m going to rehearsals; please say a prayer for me; my feet are not working tonight.” Lyra had a great sense of comedy. Lyra loved cats, and she was always watching cat videos. People always say you must have had so much in the archive from her files, but there were more cat videos than anything else. She was a great character.

Lyra’s words appear on the screen, a beautiful tribute to a writer. What made you decide to use that style?

We decided we would use her voice to narrate the film, to let her tell you her story herself as best we could with what we had, and then the words were also an extension of what you were seeing and feeling. The writing took you back into the landscape of here because what she saw was intergenerational trauma. It allowed us to see and understand why she was writing, but we also wanted people to know more about her written word because she never got to finish her book. She had this massive book deal, but she never got the chance to finish writing because she was killed. She was only 29 when she died, she was on the cusp of great things. Writing was everything to Lyra, so it seemed right to have her words on the screen.

Many people outside the North think the problems ended with the ceasefire, but there are many issues in its aftermath. The documentary gives us a clear understanding of the effects of trauma and the situation in the North today. Do you hope that people will see things differently after watching the film?

I do, and I hope it opens up the issues to a younger audience. Lyra’s name is the last name in the book of the dead, and we don’t need any more names in it. Lyra was a ceasefire baby, although she hated that name. It is her generation and younger that we really want to understand what happened, to learn about the pain of the past and all of the loss. I hope it opens up questions about the situation. We had a screening at the Achill Film Festival, and afterwards, we had a Q&A. People asked pretty bold questions about the North, and it would be great to have more screenings where that happens. Someone said that if an alien landed in Ireland and said what happened in the North, you could play them the film because it gives you an understanding of the past, the present and the future. I spoke with someone who groaned at the prospect of watching another film on The Troubles, but afterwards, he said he didn’t know about intergenerational trauma or why people are still afraid of speaking the truth. He said watching the film changed all that for him; this isn’t a typical Troubles documentary.

Tell me about the archive footage which you use in the documentary.

I went to the National Film School, where I trained in documentary filmmaking. A long time ago, my graduation film was called Belfast Women. I shot it in 1993 or 1994, so some of the archive footage of the kids is my footage. Looking back through it, I couldn’t believe I had been filming on the streets where Lyra grew up. Things like that kept falling into place. We would be looking for tapes but couldn’t find any, and someone would phone up and say their parents were tidying and found old videos with footage of Lyra when she was 16. Things would turn up. Lyra pushed to make everything right; of course, she would ensure that we got everything we needed.

Are you looking forward to LGBTQ+ communities getting the chance to see this inspirational activist?

Very much so. There are a lot of people contacting me already from the community. Lyra brought up issues and openly talked about things; she was a great inspiration. Lyra and Sara were to be married, and that’s the real tragedy of the story, they finally met the right person, and all of that was taken from them. Sara and Lyra’s family have talked to me about the film. Yes, it’s a hard watch, but they’ve told me they love coming and spending time with Lyra again. They feel they’ve got her back for a while; then they have to let her go again. It is a different look at the North, and I hope that it helps people know more than they did before and that it is informative because Lyra is telling you; she’s writing about it. It helps bring you closer to understanding what many people want to say. She gives them a voice.