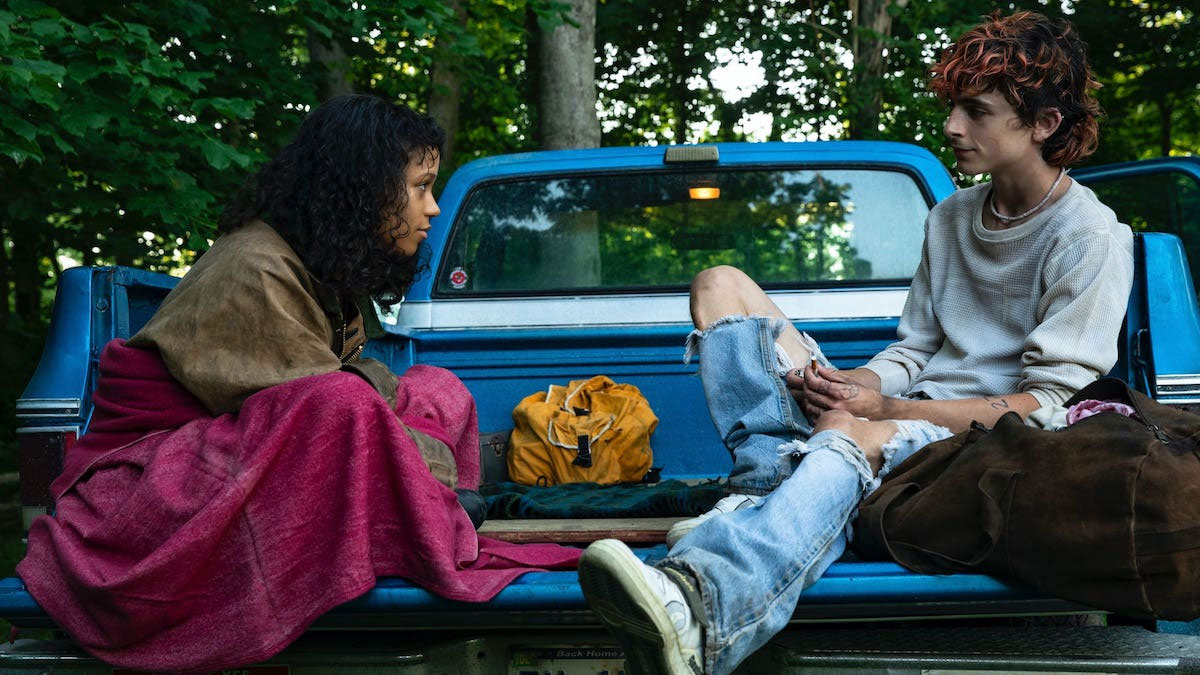 ‘Call Me By Your Name’ director Luca Guadagnino returns with this coming-of-age romantic cannibal road film that stars Timothée Chalamet’s & Taylor Russell as two drifters, travelling through 80’s America, whose unique hunger renders them outcasts from society.  We spoke to the film’s writer/producer David Kajganich to find out what made this project irresistible.

I wasn’t sure what to expect from your film – I went in cold and I loved it. What made you choose this project?
The project came to me out of the blue – sent by a producer who thought it was a great fit. And when that happens I’m always so grateful to be thought of, but it was particularly strange to be thought of in this case because it was a coming of age story of a young woman who is a cannibal. I thought the book was an incredibly complex genre amalgam, doing three or four things at once. It was about a pretty extreme world of hidden characters and I just wanted to make sure that the author who was a woman was okay with a man adapting it. We talked about it at length and she was excited to have my perspective on it. So I went off with her blessing and then just tried to understand tonally how one could tell a movie that was asking an audience to participate on so many different genre levels with different and sometimes conflicting expectations. It’s sort of thrilling and terrifying.

It’s based on a YA book but its not a YA film. Can you tell us why you chose this tonal shift?
There’s a practical answer which is that the book has a kind of fairytale tone that can accommodate quite a lot of ambiguity about how the eating works and looks – it’s very much glossed over in a kind of tone poetry but obviously when you point a camera at something it needs to be something specific. So I knew that it was going to be a Hard R film which is interesting – to take a novel that was written for a younger audience and preclude them from seeing the film. Once I’d decided that that was going to have to be the case then I could build the characters and their arcs in a much more naturalistic way which gives it a less mythological feeling. It really now feels like realism.

While the film is about a very othered but ultimately hetero-facing relationship, it does feel very queer. Is that intentional?
Well sure, having a central metaphor like cannibalism that stands in for something that people can read into the film in terms of their own pain and trauma and ways that they’ve been pushed to the side – it’s lovely because it means that we don’t have to try build a relationship between the audience and those things. I wouldn’t want to do that unless the entire film were about that. I read a review of the film the other day which said that it avoided a sort of social tourism which I’m really happy to hear. It meant that we had to be quite rigorous about keeping too much other trauma out of the film. But I can tell you that when I read the book I had a very personal reaction to it having grown up gay in the mid West in the 80s. I was able to present as straight and so I kept myself safe but I knew kids who weren’t able to and this was a time when they were saying ‘Don’t Ask Don’t Tell’ instead of ‘It Gets Better’. It wasn’t clear it got better back then. So when I read the book I felt that very deeply but I didn’t want to put that in front of all the other ways people might want to interpret the metaphor.

Do you feel that people who read the book and loved it will be positive when they see the film?
I don’t know but the author has gone so far out of her way to say that she really loves the film. She really has been quite a friend to the film

You are a writer and a producer on the film and that’s interesting because as a writer the story is your baby and as a producer everything else comes into play. How did that combination work?
I never think of the film as my baby because it’s such a collaborative medium. Once I knew Luca was directing it – it’s different in TV to film – but my job in features is that I’m the midwife and I may have conceived the baby but Luca has to birth it. I think of it that way. And the way that Luca and I work particularly with cast is that we open all the doors. Mark had really interesting thoughts about how to inhabit the nervous system of Sully, Timmy had interesting thoughts about how to inhabit Lee. It’s a pleasure to make those changes to make a part more bespoke and it only ever allows for a more grounded more reasonable set of performances because it allows them to live inside every line of dialogue.

BONES AND ALL is at cinemas from Nov 23rd