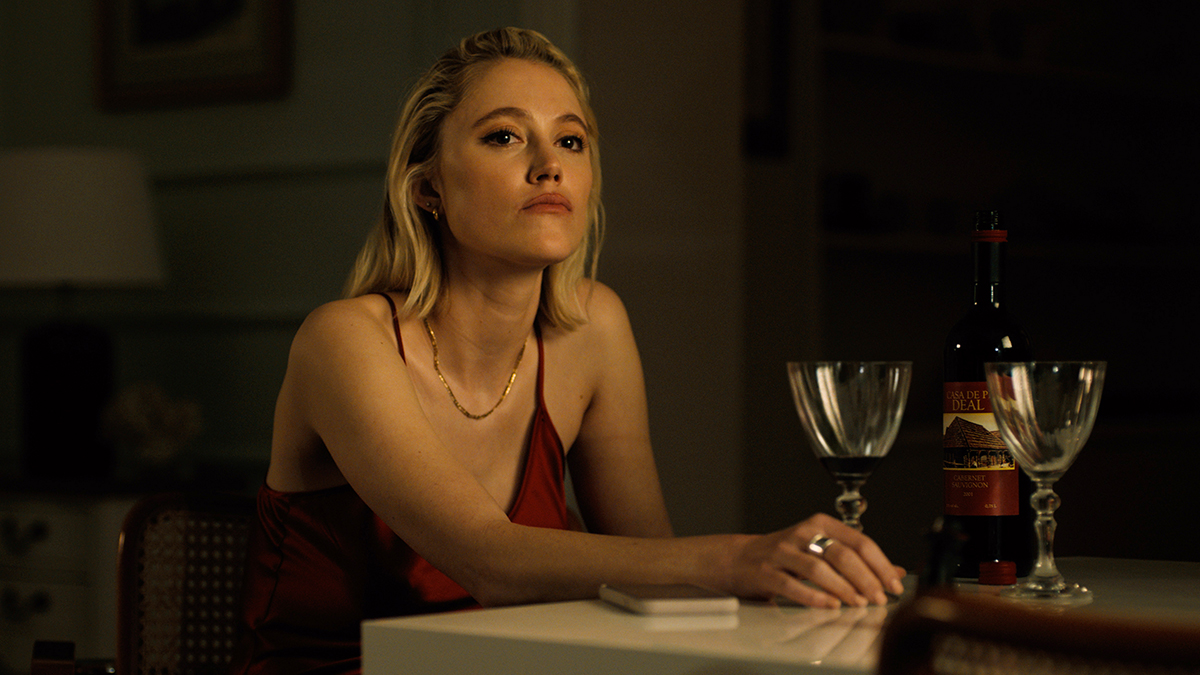 Chloe Okuno is part of the new wave of female horror directors. Having co-directed V/H/S/94, her new film ‘Watcher’ arrives in cinemas this month. It follows a young American woman, who moves with her husband to Bucharest, and begins to suspect that a stranger who watches her from the apartment building across the street may be a local serial killer. The film stars Maika Monroe, Karl Glusman, Burn Gorman & Tudor Petrut.

How important was casting for this film?
This movie was designed to be the sort of story where you are very much locked into your protagonist’s point of view the whole time, you’re really experiencing everything through her. So obviously, the casting of Julia was incredibly important. I’d always been a fan of Maika from ‘It Follows’ and ‘The Guest’. And it was a really, it was kind of a bit of a coup, I managed to get her. And it all happened a little bit last minute. We didn’t manage to get her in Bucharest, where we were shooting until I think around a week before day one of photography, so it was a little bit tense. But you know, obviously, it all worked out in the end.

Did your lead characters have to build a rapport? Or did you want to keep them separated to help tension in the film?
You know, I personally didn’t, I don’t have any strong feelings about needing to separate, I sort of leave it to them, I will say, I think Bern very intentionally decided to keep his distance from Mica. The first week of shooting, we were going out for a cast dinner and of course, we invited Burn, who made some polite excuse. But I think in retrospect, it was because he didn’t really want to have that sort of friendly rapport with Maika. And I think that was the right call, because by the time they actually sat down together, in that scene on the train, where those two characters are confronting each other, really, for the first time, one on one is really powerful. And I think you did feel like these two people are really sort of connected for the first time.

What was it like working with Zack Ford?
Well, it was interesting, I initially came on as a director for hire, it was x original scripts. And this one production company had optioned the script, they were looking for directors, they hired me. And I think Zack did a rewrite based off of some notes, the producers and I had, but ultimately, I took over the writing responsibilities myself, because I’m also a writer, director, and producers very generously sort of allowed me that space to do the work. And Zack, obviously, is incredibly talented. And he wrote a script where the fundamental concept and the sort of bones of it all were great. And I was really sort of drawn to the simplicity and the minimalism of the story that he, he created.

The film is gorgeous, what was it like trying to find the perfect locations?
That was the hardest part of the movie, I managed to get there pretty early, I think eight weeks before we started photography, I was really just doing location scouting. We did a whole tour of the subway system, the subway system in Bucharest is an embarrassment of riches. I could have shot in every single one of the stations, they’re all unique and all beautiful. But particularly we were focused on finding Julia’s apartment, because that’s such a huge part of the story. My brief to the location scouts was we need huge windows. I wanted it to be a place that was sort of open plan that gave me the ability to move around and to find interesting angles. Maybe it exists in Bucharest somewhere, but we never found it. So, we ended up doing a set build.

Bucharest has this unique combination of architecture, which I think we really use to our advantage. Part of the city sort of looks like Paris, very European, it feels very Western. And the other half of the city is very Soviet. It’s full of more brutalist architecture. So yeah, we tried to incorporate both of those, depending on where we felt Julia was at mentally.

A topic that is prevalent in your film, is about believing people, and in particular women. Was that important for you to get across?
Yeah, it was, for us as filmmakers, we can only speak to our own experiences. For me, the experience of being a woman in the world can be very frightening, and very frustrating. This is a thriller, and it’s about a literal sort of danger and the potential for violence. But also it’s about a general feeling of your voice not being heard. And of being surrounded by a world in which you are not really taken seriously. And you can be screaming at the top of your lungs, or even very rationally and calmly, explaining why you think you have a certain fear, but it can be anything, a certain opinion. And you find yourself sort of consistently undermined and doubted. If people start to doubt you, you start to doubt yourself in large and small ways. I mean, that is something that I’ve certainly experienced, I wouldn’t be at all surprised if a lot of women have experienced that in one way or another.

It was important to me to get that across and get across the ways in which very mundane activities can feel very scary, walking down the street, going to a movie, going to the grocery store. It’s not like she’s going down into a sewer system or something. It’s normal activities, but they in of themselves can actually start to be very frightening, but it’s not an experience that you can easily articulate to other people who haven’t experienced it first.

WATCHER is at Irish cinemas from Nov 4th