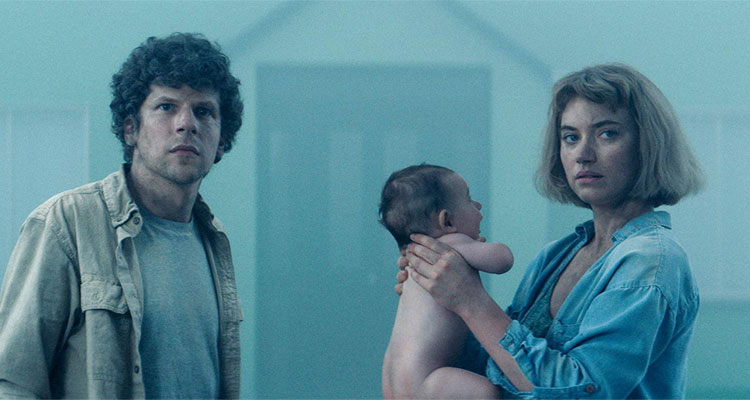 The Plot: Tom (Jesse Eisenberg) and Emma (Imogen Poots) are looking for a new home. No children yet, but there’s no harm in planning for the future. When eager real estate agent Martin (Jonathan Aris) convinces them to take a look at a community of new housing developments, they find it all rather cookie-cutter and lacking any real personality. Everything is painted a sickly green. Martin disappears and they quickly panic as they realise that they can’t find their way out. All the houses are identical and they keep coming across one in particular – Number 9, which they seem destined to live in until they can figure out what’s going on. Then a baby turns up with a cryptic message about raising it to be released…

The Verdict: Vivarium is quite the brain-teaser. The second feature of Lorcan Finnegan, it follows along similar lines of his debut – Without Name, in which a man is hemmed in by his seemingly supernatural environment. Perhaps he has an interest in boxing his characters in and watching them crack under the strain of increasingly strange, otherwordly events that are beyond their control. Vivarium touches more on the sci-fi and surreal though, foreshadowing what’s to come in the opening sequence. From there on in, it becomes a Twilight Zone-ish waking nightmare, as Tom and Emma adapt to their new lifestyles like birds in a not-so-gilded cage.

The clue is in the title – a place where live animals or plants are kept under similar conditions to their natural environment for research purposes. The subjects here are human, which raises questions as to what exactly we’re watching here. Is it an alien experiment or something deliberately ambiguous like in Cube? Is it an imitation of life, but without the soul? Tom and Emma find that everything looks the same – the houses, the roads, even the non-moving clouds. The food is tasteless and TV consists solely of psychedelic test patterns. Tom dubs The Boy (Senan Jennings and then Eanna Hardwicke) a ‘creepy mutant’ as he grows in a matter of weeks. He is the unwanted child thrust upon them to keep them focused on their new humdrum existence.

Garret Shanley’s puzzle-box script is like a 1970’s thinking person’s sci-fi film, tickling the little gray cells and providing no easy answers. It leans towards the surreal, absurd and Kafkaesque, which is presumably why it appealed to the offbeat tastes of Jesse Eisenberg. He executive produces here along with Imogen Poots and it’s to their credit that they hold the screen and our sympathies as their characters are trapped in this seemingly endless nightmare. Shanley’s script is multi-layered and requires a lot of focus from a director to keep audiences onside. Fortunately, Finnegan harnesses the potential of the script and shows more focus and control here than in his somewhat muddled debut.

He’s moved a step up with Vivarium, showing a visual style that is quite arresting at times. The suburban environment feels homely but oppressive, a place to escape from rather than come home to. The housing development is ironically called Yonder. A benign prison for our frustrated guinea pigs? On the whole, the film is quite puzzling and in retrospect does not make a whole lot of sense, but it’s executed so well that you won’t notice so much. It’s certainly distinctive enough to warrant a look and promises good things for Finnegan. It’s unlikely you’ll see anything quite like it this year.