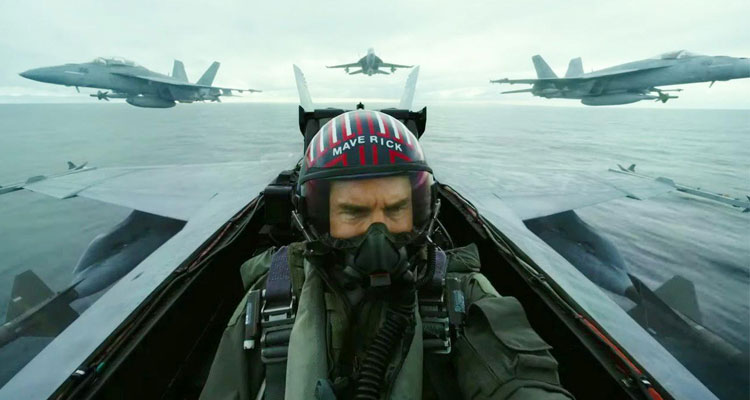 The Plot: Captain Pete Mitchell callsign Maverick (Tom Cruise) is still pushing his limits and disobeying orders, now as a test pilot. He’s called back into Top Gun service at the request of Iceman (Val Kilmer). He’s to train the best of the best pilots for an upcoming low-altitude, high-risk mission to destroy an enemy target. This will not be an easy task and Maverick is something of a dinosaur. Among them is Rooster (Miles Teller), the son of his fallen comrade Goose. Still harbouring feelings of guilt over the loss of Goose, Maverick will have to overcome them, face up to Rooster and prove to the new naval brass that he’s still got the need. The need for speed…

The Verdict: Better late than never. Almost three years after its original intended release date, Top Gun: Maverick has blasted onto cinema screens and boy, has it been well worth the wait. It’s the last of the long-delayed blockbusters to emerge into the sunlight after a dark period for cinemas, but maybe the best has been saved for last. A passionate supporter of the cinema experience, star and producer Tom Cruise parked his metaphoric F14 Tomcat in the hangar and waited for the pandemic storm to pass. Now the long-awaited sequel (in more ways than one) is up finally up in the air and it undeniably aims for new heights for both Cruise and the cinema audience he made the film for. Selling it off to a streaming platform just wasn’t an option. This is the kind of film that benefits not only from a big screen and Dolby Atmos sound, but also the communal experience of sitting in the dark and sharing the experience with others.

Of course, making a sequel to the one of the most iconic films of the 1980s was going to be a challenge. The late Tony Scott (who gets a dedication) made the very definition of a 1980s blockbuster, changing the course of his own career into action-thriller territory. Picking up where Scott left off is director Joseph Kosinski, who previously directed Cruise in Oblivion. Kosinski could very well have been flying into the danger zone of nostalgia with this follow-up. Lean too heavily into it and it becomes a melancholy callback to a different time to our own. Go too modern and progressive and you lose the connection to what made Scott’s film so darn entertaining that you wanted to leap out of your seat and do fist pumps in the air. Kosinski and his writers Ehren Kruger, Eric Warren Singer and Christopher McQuarrie have zeroed in on the target with their crosshairs to find that sweet spot between 1986 and 2022. The right balance of nostalgia and progression for not only Maverick himself, but also the legacy that is left as he confronts his own destiny in the skies.

The years have left their mark on Maverick, but he hasn’t changed that much. Avoiding the promotion that could very well anchor him to a desk job, he’s still pushing himself, his plane and his crew to go further than before and possibly achieve the impossible. It’s fascinating to watch Cruise slip back into the role like an old glove that still has some sparkle to it. ‘Your kind is heading for extinction’ growls Ed Harris’ unimpressed Rear Admiral. ‘Maybe so sir, but not today’ retorts Maverick. True to his callsign, he’s changed in some respects but remains doggedly defiant and he needs to be like that to impress the young hot shots that supposedly know everything. The word impossible is not in Maverick’s dictionary and true to form, Cruise’s star wattage smashes some bulbs as he takes to the skies – for real.

A stickler for doing things in-camera (and rightly so given the prevalence of greenscreen), that’s Cruise and his cast rolling about in planes pulling G forces with Air Force pilots neatly hidden out of view, with the IMAX camera bolted into the cockpit for you-are-right-there realism. Hold on to your popcorn as the film literally takes your breath away with outstanding aerial footage of dog fights and swirling, rotating modern fighter jets along with the return of a familiar piece of hardware from the original film (an amusing but heartfelt touch). Kosinski cleaves closely to the format of the original film, with an unnamed enemy force in a foreign country that needs to be dealt with in the thrilling third act. The film’s murky politics remain rooted in the 1980s, but then again Top Gun never really flew for a political angle. The sequel is likewise about heart, comradery and bravery, best epitomised in a single scene between Cruise and Val Kilmer’s returning Iceman, made all the more poignant by Kilmer’s own battle with throat cancer.

After two uncertain summers where studios were gingerly testing the waters to see if audiences would come back to the cinema, Top Gun: Maverick could very well be the summer blockbuster to beat this year as things finally settle down. The nostalgic/modern tone is spot-on, the script develops both Maverick and the new characters to a point where that respect is earned, the supporting cast including Jennifer Connelly’s love interest Penny work at Cruise’s pace and Kosinski delivers on what Point Break’s Bodhi called 100% pure adrenaline. Strap yourself in and let the Cruise control take over. Top Gun: Maverick soars.