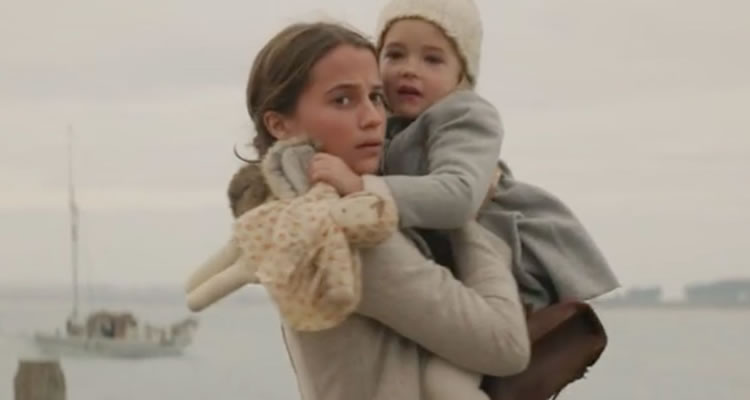 The Light Between Oceans

THE LIGHT BETWEEN OCEANS (UK | New Zealand | USA/12A/133mins)
Directed by Derek Cianfrance. Starring Michael Fassbender, Alicia Vikander,
Rachel Weisz, Florence Clery, Jack Thompson
THE PLOT: When Tom Sherbourne (Michael Fassbender) returns to Australia after World War I, he takes a posting as a lighthouse keeper on the remote Janus Island, saying “I’m just looking to get away from things for a little while”. After he marries Isabel Greysmark (Alicia Vikander) the two return to their isolated home with dreams of building a life together. Isabel suffers two miscarriages and is reaching despair when a boat washes ashore carrying a baby girl and a dead man. Seizing the opportunity, the Sherbournes take the baby in as their own, but years later discover that the baby’s mother is alive and has no idea her daughter survived the tragedy that claimed her husband.
THE VERDICT: Based on the book of the same name by M. L. Stedman, ‘The Light Between Oceans’ is a romantic period drama with a twist, directed by Derek Cianfrance, who previously brought us Blue Valentine and ‘The Place Between the Pines’.
Michael Fassbender leads the cast as the tortured and romantic hero Tom. Keeping the character stoic but with a strong moral compass, Fassbender is strong in the role and has some lovely scenes with the young actresses who play the couple’s adopted daughter at various stages of her life. Alicia Vikander is charming as Isabel, and makes the character’s desperation for a child feel palpable with her performance. Rachel Weisz rounds out the central cast, and does well as a woman who is as lost as her baby is.
As screenwriter, Derek Cianfrance has adapted M.L. Stedman’s script for the big screen, and does well with the first half of the film in terms of pacing and allowing the audience to get to know the characters. The idea that it is the woman who wants to keep a baby that is not hers is one that feels rather familiar and cliché, and Cianfrance does little to shake this notion from the film. The second half of the film, where the mystery and morality tale truly kick in, is surprisingly the slower half, where the characters spend time back and forth between the mainland and the island, and many questions raised are never answered.
As director, Cianfrance tries his best to keep the film moving at a steady pace, but struggles in the second half, leaving the film to get bogged down by the to-ing and fro-ing of the characters. The performances are strong if a little twee, and although this film is designed to be a tearjerker, there is too much skimmed over for ‘The Light Between Oceans’ to be anything but drawn out and meandering. As well as this, the drama is never truly amped up enough for the film to grip the audience, leaving us drifting along with the story and hoping for a pick up in pace. Adam Arkapaw’s cinematography is beautiful however, and truly shows off the beauty found at the end of the world.
In all, ‘The Light Between Oceans’ is neither as dramatic or emotional as it should be. Vikander, Fassbender and Weisz are strong in their roles, but they are undermined by a soupy storyline and a reliance on saccharine sweetness to carry the story.
RATING: 3/5
Review by Brogen Hayes