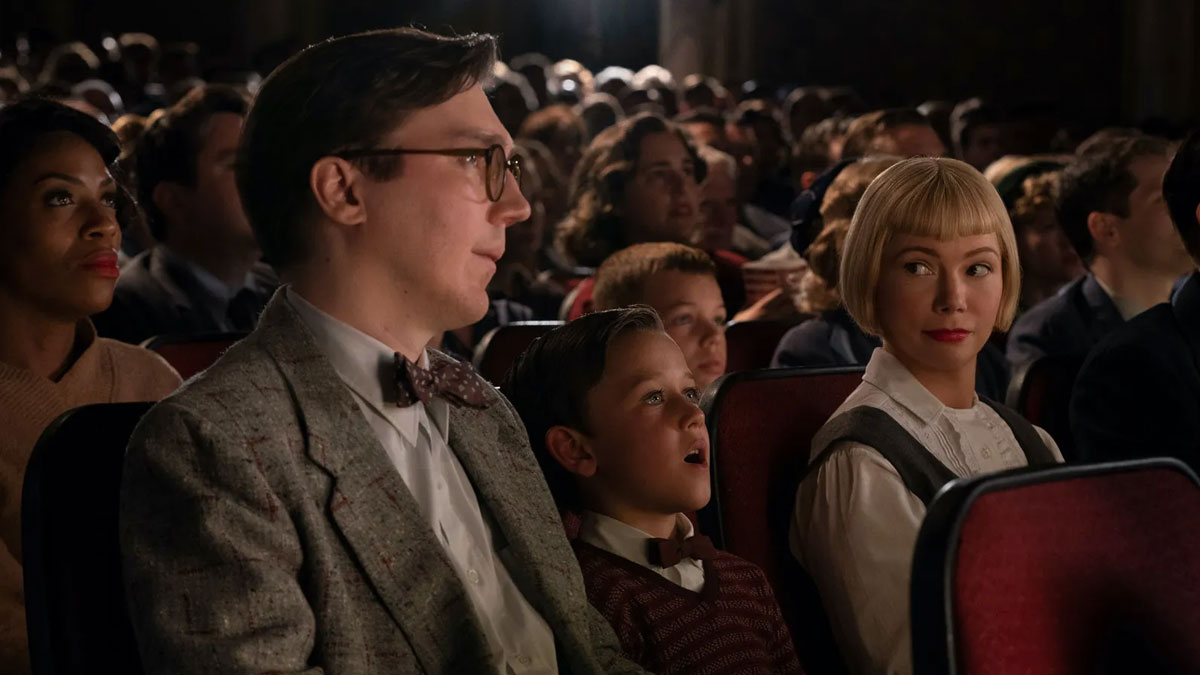 The Plot: When his parents Mitzi (Michelle Williams) and Burt (Paul Dano) first brought him to the cinema, young Sammy Fabelman (Mateo Zoryan) didn’t quite know what to make of it all. However, it lit a spark in his mind and ignited a lifelong passion for the movies. Now a teenager (Gabriel LaBelle), Sammy is having fun making home movies and war shorts with his family and friends, impressing those around him with his eye for detail and performance. His camera also catches other details he hadn’t noticed before about the lives of his parents, leading to a secret revelation…

The Verdict: Deep in Spielbergian lore, he once directed a film called A Boy’s Life. In post-production, the title was changed to the landmark film that we all know and love – E.T. The Extra Terrestrial. Perhaps Steven Spielberg should have revived that old title for his latest film The Fabelmans. Never mind the sitcom-sounding title, The Fabelmans weaves life and art together in a way that is deeply personal for this most popular of filmmakers. The fact that he’s willing to share his own story as a youth with the world makes it all the more precious and all the more enjoyable as a result. It captures that childhood innocence of being initiated into the world of cinema from the opening moments, as young Sammy is told just what to expect from a night at the movies watching The Greatest Show On Earth. That could very well be a description for cinema itself, such is the devotion on display. The Fabelmans is a lot more than that though. As we know all too well from his movies, Spielberg came from a broken home and that’s where the drama in his formative years lies.

Written by Spielberg and his regular screenwriter Tony Kushner, The Fabelmans is semi-autobiographical and loosely based on Spielberg’s childhood. Though, it appears to be a little less loose than one might think – at least according to Seth Rogen. In development for over two decades, the script comes across as a summation of Spielberg’s style, wit, observation and his greatest gift as a filmmaker – a natural born storyteller. Here he opens up at last to audiences about his early ears, spinning quite a fable out of The Fabelmans. There’s parental drama at home, dealing with bullies in school, the first flush of love and the fledgling filmmaker emerging beyond hokey war films to expectant success. It’s about a boy growing up in a Jewish household in the 1950s and 1960s, moving first to Arizona then to California and finally onwards to a promising career in Hollywood where he later set pulses racing with his first feature Duel. Fortune and glory, kid. Fortune and glory.

The way that Spielberg and Kushner construct all this without it falling down like a house of cards is a small wonder. Yes, there’s a fair amount of soapy melodrama at home about Sammy and his parents as the family unit comes under the threat of irresponsible behaviour. This is observed through Sammy’s eyes and also the camera lense as he takes to filming what he sees. In lesser hands, this might have sunk the film and doomed it to being schmaltzy pulp with a side helping of cinematic love thrown in for good measure. Spielberg is a more careful and considered director than that though. He skirts close around the soapy edges, but instead manages to scoop them up and blow bubbles out of these scenes thereby creating genuine emotion and movie magic. Take for example a wordless scene involving a closet and a film projector which tells the audience all they need to know about a key relationship in the film. It’s a masterclass in minimalism, removing the mellow from the drama and turning it into high art which gets to the truth of the matter. The camera doesn’t appear to lie here.

In Cinema Paradiso, projectionist Alfredo remarks that life isn’t like in the movies – life is much harder. It’s a sentiment that is echoed by Spielberg in one scene, but later on he also suggests that why can’t life be just like in the movies – if you really believe? Spielberg has always been in touch with not only his own inner child, but that of the audience’s. As he once said ‘I always like to think of the audience when I am directing. Because I am the audience.’ There’s a fair amount of length involved in The Fabelmans, but every minute is earned here. It’s the effortless way he draws life, movies and everything in between into one grand story that leaves you wanting more. It doesn’t always work and is a tad too sentimental (a Spielberg trademark), but this boy’s life is full of wonderful experiences and cinematic riches that set him on the path to success and justifiable audience adoration. If anything, that closing scene is sheer perfection and is worth the price of admission alone. This is Spielberg at his most personal and personable and what a delight it is.

In short: A Boy's Life