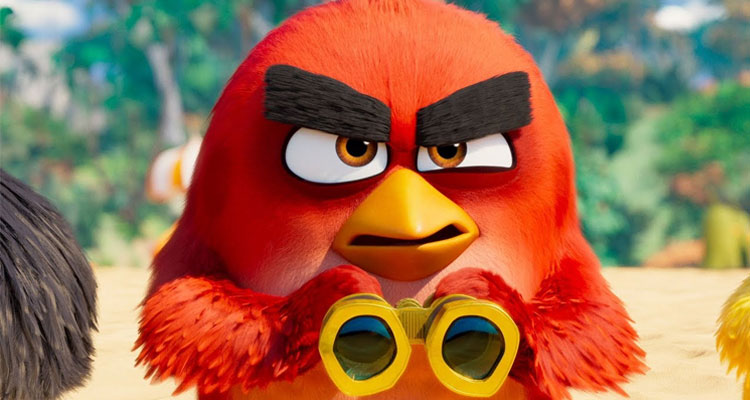 The Plot: The flightless avian inhabitants of Bird Island are still at war with the crafty pigs across the ocean. Not for long though. Both their respective islands are being attacked by an external force, which is sending giant balls of ice crashing into their communities. The source is the newly-discovered Eagle Island, which is ruled over by the brash Zeta (Leslie Jones). She wants to escape her frozen ice cube of an island and start a new world on the other islands. Piggy leader Leonard (Bill Hader) calls a truce and seeks out the grumpy Red (Jason Sudeikis), who is already having a bad day. Together, they put together a crack team of commandos comprising birds and pigs to investigate what Zeta is up to and stop her…

The Verdict: The Angry Birds mobile app is fiendishly tricky and addictive, built around flinging birds to knock down the defences of the over-confident piggies. As is the way of something that has become part of popular culture, an animated film adaptation followed in 2016 and was surprisingly enjoyable. Whaddaya know… There can be good videogame adaptations after all. Part of the film’s success was due to its anarchic and irreverent tone, backed up by a well-cast group of comedians providing the voices. Now we have the inevitable sequel, with the predictable title of The Angry Birds Movie 2. A more appropriate and amusing title would have been Angry Birds 2: Fly Harder. There’s plenty of flying going on, even with these flightless birds. While it doesn’t quite soar, the wings flap enough to stay in flight.

This sequel revolves around the whole ‘the enemy of my enemy is my friend’ theory. The birds and piggies have to band together to save their respective islands from destruction by the villainous Zeta. She’s a Zod-like eagle with ideas about terraforming, but she’s really a softie at heart. She may act all big and bad, but she has her own backstory which is unusually intricate for an animated family film. It’s not the only thing that’s unusual – a brief burst of underwater opera, anyone? While she plots away, the birds and piggies smuggle aboard Eagle Island in a Trojan Horse-type scenario – which is the source of the film’s biggest laughs.

Director Thurop Van Orman makes his feature debut here, having worked as a writer on animated TV productions. He keeps to the same winning formula as the first film, but the new direction of the plot means that the arch rivalry between the two main camps is scaled back quite a bit. The plot kicks in almost instantly and the rivalry is set aside a little too conveniently. More bickering between mid-mission them wouldn’t have gone amiss, particularly involving the lonesome Red, whose default expression is set at ‘meh’. When you have no special powers, that’s understandable. A sub-plot involving three little chicks going on their own adventure seems to be a short film within the film, though they finally come into play towards the end.

The Angry Birds Movie 2 is essentially more of the same, possibly a result of four screenwriters playing it safe and not ruffling too many feathers in the script development process. It’s a good-natured film though and the breakneck pace should entertain children and families alike without them getting itchy in the process. These birds achieve flight and knock down enough defences to justify a sequel. Though, maybe that’s enough. We wouldn’t want it to outstay its welcome and end up as an Emoji Movie-style disaster. That would be a bird-brained decision.