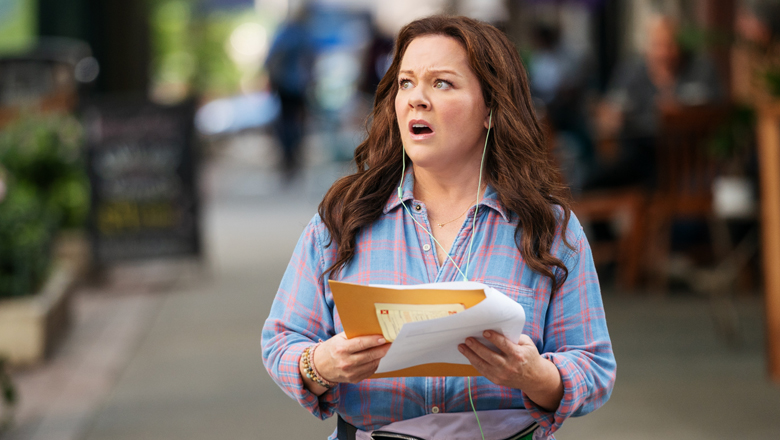 The Plot: Carol (Melissa McCarthy) never really amounted to much. At a job interview for a tech company, she’s described as the most average person on Earth. However, someone took notice. Or rather some thing – a company artificial intelligence that has become self-aware. It hacks into her home appliances and starts talking to her in the pleasant tones of James Corden, to put her at ease. The AI wants to study her as a typical specimen of a human being, to decide whether humans are worth saving. Otherwise, the AI will start an apocalypse and then it’s game over for humanity. First though, she needs to reconnect with old flame George (Bobby Cannavale) who is about to move to Dublin to lecture at Trinity College…

The Verdict: Is there an AI superintelligence at work in Warner Brothers, working with the bean counters to determine the likelihood of a film’s outcome in a pandemic? Given their game-changing shock move to debut their entire 2021 slate in cinemas and online simultaneously in the US via their subscription-based HBO Max platform, one has to wonder. New comedy Superintelligence is only available on HBO Max in the US, but thankfully it’s getting a cinema release here. It’s the kind of high-concept, star-led studio film that is more acceptable entertainment in the cinema. Once the lights go down and you’re a captive audience member, you’re less likely to notice the flaws and more likely to engage with the warm performances and amusing plot developments that see an ordinary woman become extraordinary in her own way.

Superintelligence is the fourth collaboration between husband and wife team Ben Falcone and Melissa McCarthy. Their previous films together have been middling at best, but Superintelligence has an ace up its sleeve: Bobby Cannavale. The talented New Jersey-born actor brings an earthy humanity to his character George, a man who knows where his life is going and isn’t going to let anything disrupt it. Contrasted against that is Carol, who is the opposite and in need of change and some healthy mid-life reassurance. The fact that it comes from a friendly / threatening AI makes for entertaining viewing, as the two old flames spark off each other with the AI acting as a sort-of cupid. Carol and George look like relatively simple characters on the page, but Cannavale and McCarthy bring some extra depth to power the film through its many sillier moments.

Steve Mallory’s script scores marks for character development – not something you’d normally associate with a high-concept studio comedy. That comes at a price though. The impending apocalypse sub-plot is never really that convincing, perhaps because Corden’s cheeky chappy voice is more of a help than a hindrance to these puny humans. While the AI is a character in itself, it disappears for a good portion of the film and thereby dissipates tension. It’s meant to be ever-present and omniscient, but like any machine it needs data to learn. There is much unconvincing silliness involving Carol’s Microsoft employee friend Dennis (Brian Tyree Henry) and the US President (Jean Smart) in an emergency war room, though Falcone dropping a reference to a certain Matthew Broderick film is cute.

If the background elements had been as tightly-reined in as the main plot involving Carol and George, then this could have been a more rounded affair. A bit like Carol herself, Superintelligence is average and may not look like much on the surface. However, there is an unexpected joy in watching an on-form McCarthy and Cannavale give the film a gentle human touch that is sentimental without being sickly sweet. It may not be super, but it is more intelligent and warmly engaging than it deserves to be.