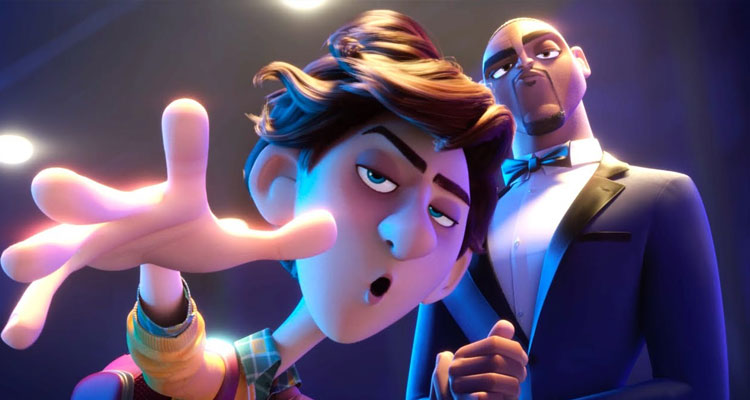 The Plot: Walter (Tom Holland) has always had a knack for gadgets and inventions. He works for a secret spy agency in Washington D.C. and is the nerdy Q to his super spy boss Lance (Will Smith). Lance is too cool for school, a supremely confident spy who regularly saves the day without getting too bothered about it. While investigating the theft of a deadly weapon by menacing metal-handed baddie Killian (Ben Mendelsohn), Lance will need some extra cover to make him invisible. However, Walter’s experiment turns him into a pigeon which doesn’t go down too well with the spy. The duo will have to work together to save the world while Lance flaps about looking for clues…

The Verdict: With No Time To Die looming closer in April, the influence of the Bond films is very much felt in family animation Spies In Disguise. There’s a twist though. While James Bond had to deal with a double-taking pigeon (!) in St Mark’s Square in Moonraker, he was never actually turned into one. That’s the bird brained premise behind Spies In Disguise, which comes from Ice Age and Robots animation outfit Blue Sky Studios. It’s loosely based on the 2009 animated short Pigeon: Impossible. Maybe it would have been better off staying as a short. While it’s a pleasant and undemanding film for the family, the concept is stretched a little too far for it to fly successfully.

The set-up works well, introducing suave spy Lance Sterling in a Bondian pre-title sequence set in Japan which makes a nod or two to Kill Bill: Volume 1 for more mature eagle-eyed viewers. The world-building is colourful, establishing its villains and heroes while also suggesting that not everything will go according to plan. When it looks like Lance has been framed, he goes on the run with sidekick Walter for a rollicking adventure that’s not without its good elements (an amorous lady pigeon, Mendelsohn’s darkly humourous voice work). Unfortunately, there aren’t enough of them to get over the overstretched nature of the plot. At one point, it appears that co-directors Nick Bruno and Troy Quane give up on the concept and bring the story back to where it was.

That inconsistency in sticking with this bird-brained concept over feature length hurts the film’s tone. Sadly, it’s a mistake that is repeated again later on as if to fill in the narrative gaps and get the film over the finish line. That’s a shame, because Spies In Disguise isn’t a bad film per se. It’s just not a very good one. The fluid CGI animation looks great and Will Smith is ideally cast as a super cool spy, dashing about and saving the world in a more convincing manner than Rex Dasher in the forgettable Playmobil: The Movie earlier this year. When one considers how imaginative and striking Robots was, Blue Sky Studios have produced a new film that doesn’t have much to offer to distinguish it from the glut of other animated family films out there. Passable but unremarkable.