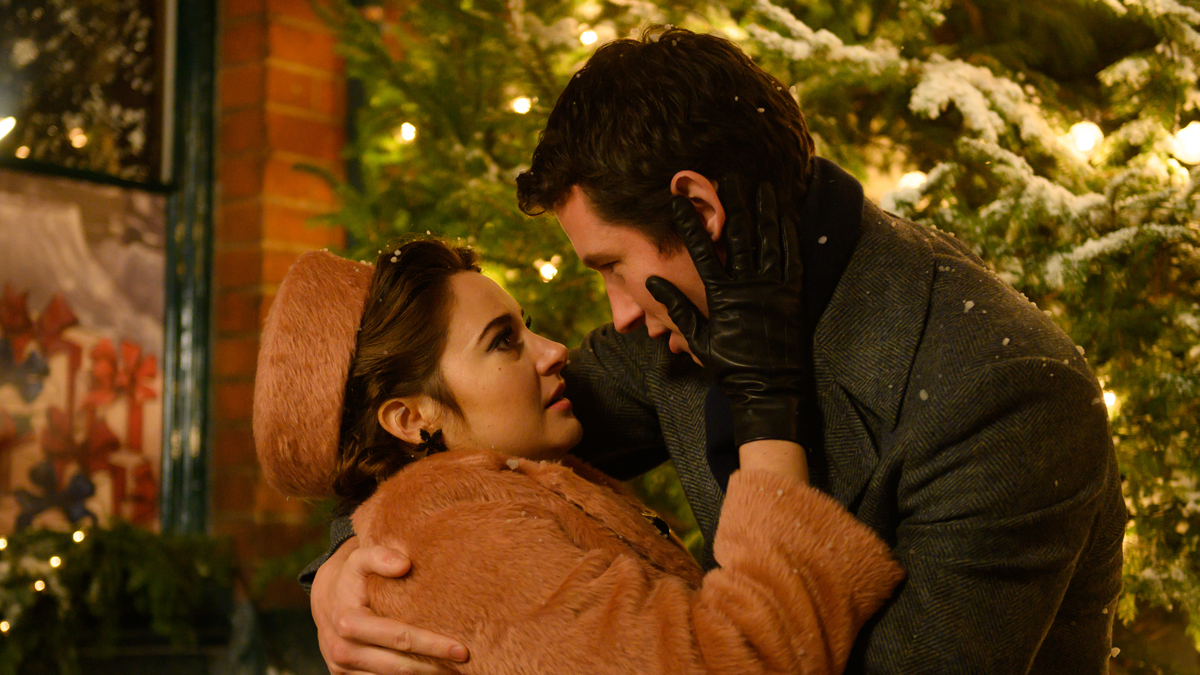 Based on the best selling novel by Jojo Moyes, ‘The Last Letter From Your Lover’ is an ambitious film that intertwines two stories, over two different time periods. When a journalist finds a trove of love letters from the 1960s, she finds herself trying to solve the mystery of a secret affair. We caught up with the films stars Shailene Woodley and Felicity Jones to talk about the challenges of filming two different love stories set over two different decades.

Was it strange to be in the same film and not share a single scene?

Shailene Woodley: I was really looking forward to the opportunity to work with Felicity and we never got the chance! It makes it exciting to be honest, on my end, because at the end of the day you know your storyline inside and out, and we know how the different actors performed and worked with you on the given storyline that you’re participating in, but I have no idea, apart from what I read in the script, how Felicity and Nabhaan breathed life into that particular dynamic. And so, watching the film you get giddy, because as much as you know part of it, you don’t know the other part of it and it’s like you’re watching an entirely new film for the first time.

Felicity Jones: It was quite sad because when I heard originally, I thought Shailene and Callum would be playing their older selves. So, I was really excited because I thought, well at least I will get to do a scene with them, and then when it was decided that they would be played by older actors, then I was really crushed. I was really sad that we wouldn’t get that opportunity, but we had some nice chats in the makeup trailer, which didn’t really make up for not acting together, but at least we had a little bit of crossover.

Felicity, you have played a lot of characters that have had a lot of responsibility, did you enjoy getting to play that lighter side and have fun?

Felicity Jones: Yeah, I absolutely loved it and I was so keen to do something like that. I think Ellie is so relatable; I see so much of myself in her and I love the idea that she is in a phase in her life where she is going out too much, and so she is always a bit hungover the next day, and things don’t come that easily. You know things are a little a bit of a struggle, but also, she deals with it through humor. So, it’s so nice to do something that was a little bit lighter in tone. She is not someone that is getting it right every single moment which is really, really fun to play.

Shailene, costume is always important in film, but Jennifer’s outfits are so specific not just the 1960s but also to her class. Does that help inform your character when you get such amazing costumes?

Shailene Woodley: Absolutely. It’s the outfits, and it’s the hair. It’s the makeup, the nails, it’s the stockings, it’s the corset underneath, it’s every single piece of Jennifer that came together and specifically, I think, the accessories in a funny way, transported me more than anything else. The accessories: the hats and the gloves because those are often overlooked. I never wear hats or gloves or wear scarves, and so having those really elevated the experience for me, it really did make me feel that I was living and breathing in Jennifer’s literal shoes.

We see such a contrast between the lives of women in the 1960s and today. Do you think it was important to see distinctions between how society treats Jennifer and Ellie?

Shailene Woodley: I think it’s definitely interesting because the external worlds of these women do look very different, and I think we want to see that despite the external circumstances that do constantly shift throughout time, and as changes are made, the internal dynamics that they are experiencing are exactly the same, in many ways. I think, as human beings, the external things that we fight for, progress and change, are beautiful but oftentimes the emotional value of being such emotional creatures on this planet is overlooked, because those simple truths – the pursuit of truth and then devotion to truth, that seems to me to never change. It seems to be an intrinsically human factor.

They do have similarities despite vastly different circumstances, would you agree?

Shailene Woodley: Throughout the journey of the film, you watch as Jennifer makes the transition from listening to sociopolitical dogma and rules, to listening to her own intuition and following what that means, despite any animosity that might come with that. And I think what she has in common with Ellie is that these are two women who don’t necessarily want to live by the rules of the status quo, who aren’t willing to settle, and who aren’t willing to turn a blind eye to the matters of their hearts despite the fear, the insecurity, and the ego that can come with that.

Felicity Jones: I think they both also have a really strong sense of truth; I think that is why there’s turbulence for different reasons in their lives. I think they are both in the pursuit of truth and truthful connection and relationships. And I think that is what Ellie sees in those letters; is that raw honesty and vulnerability, which is what she hasn’t been able to find in a relationship and is hoping exists and so when she sees it in these letters, she knows it does exist, and it is possible. So, I think that is the thing that, despite the time difference, there is that synergy between them that, in some ways, is what makes them both so vulnerable.

Some actors do not like to read original source material, do you find it helpful to read the book the script was based on?

Shailene Woodley: It depends on the project. If scripts are similar adaptations or exact adaptations of a book then I find the books to be extremely helpful, because they fill in the gaps that scripts sometimes leave out, and there is a lot of details that can be helpful in even understanding the world more in the scope of the project that you are working with. But if the scripts veer far off from where the book originated then I don’t read it.

Felicity Jones: The book is useful and really helpful ,and maybe you don’t take everything verbatim, but it gives you a guide and it can, as Shailene said, fill out all of the thoughts the character might be having, and gives you a sense of their motivations and why they are doing things and how they have got to the point where they have got to, and I just think, yeah, why not, why would you not read the book, because it’s only going to be helpful in some way.