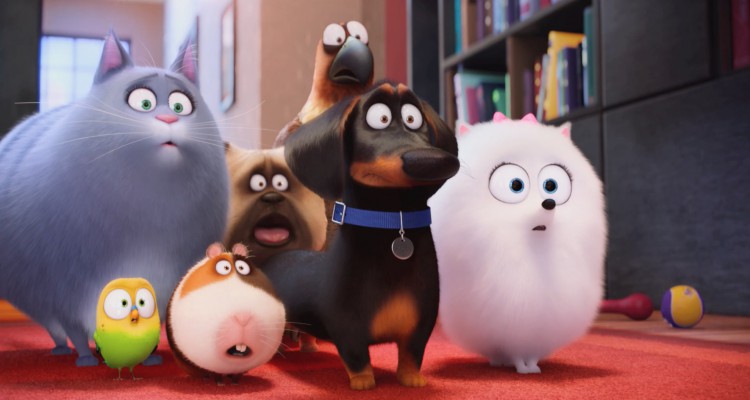 The Secret Life of Pets

THE SECRET LIFE OF PETS – Review (USA/G/90mins)
Directed by Chris Renaud & Yarrow Cheney. Starring Louis C.K., Eric Stonestreet, Jenny Slate, Lake Bell, Ellie Kemper.
THE PLOT: A terrier named Max (Louis C.K.) lives in a Manhattan apartment building with his owner and best friend Katie (Ellie Kemper), and spends his days hanging out with the other neighbourhood pets, cat Chloe (Lake Bell), and other dogs Mel (Bobby Moynihan), Buddy (Hannibal Buress) and Gidget (Jenny Slate). When Katie comes home with a new dog Duke (Eric Stonestreet), Max hatches a plan to get rid of the interloper, a plan that puts them both in danger.

THE VERDICT:
‘The Secret Life of Pets’ is a cute idea for a movie; people have often wondered what their pets do when they are home alone – some even setting up Nanny Cams to keep an eye on them – but this new film from director Chris Renaud and screenwriters Ken Daurio, Brian Lynch and Cinco Paul feels more laden with plot than jokes, and that plot feels more than a little familiar.
The voice cast do well with their roles, with Jenny Slate in particular standing out as fluffy white dog Gidget. Slate’s comic timing, voice work and general charm make her stand out from the rest of the cast, which includes Louis C.K., Eric Stonestreet, Steve Coogan, Ellie Kemper, Lake Bell and Albert Brooks. Another standout comes in the form of Kevin Hart, who genuinely does his best work to date as the fast-talking, maniacal bunny Snowball.

Screenwriters Brian Lynch, Cinco Paul and Ken Daurio have fun with the smaller, throwaway moments of ‘The Secret Life of Pets’, but when the screenplay is boiled down to its component elements, it bears a strong similarity to Toy Story, albeit without all of the warmth and heart of the Pixar film, no matter how much it tries. Some of the characters work better than others, and this is down to both writing and the delivery from the actors, but the sheer amount of plot going on in the film and the amount of threats that frenemies Duke and Max have to face leaves the film feeling rather messy, and the comedy falls by the wayside.

Director Chris Renaud previously brought us the ‘Despicable Me’ films – alongside Pierre Coffin – and ‘The Lorax’ – alongside Kyle Balda – but teaming up with Yarrow Cheney for ‘The Secret Life of Pets’ does not yield the same comedic results as Renaud’s work with Coffin. There are plenty of attempts at injecting comedy and heart into the film, but they never quite land the way they should, leaving this plot heavy caper always feeling as though it is trailing behind recent animated films from other studios.
In all, ‘The Secret Life of Pets’ feels rather familiar, and although the voice cast do their best with their roles, the comedy and warmth that the film needs are lacking, leaving this a brightly coloured, plot driven film that doesn’t always quite work.