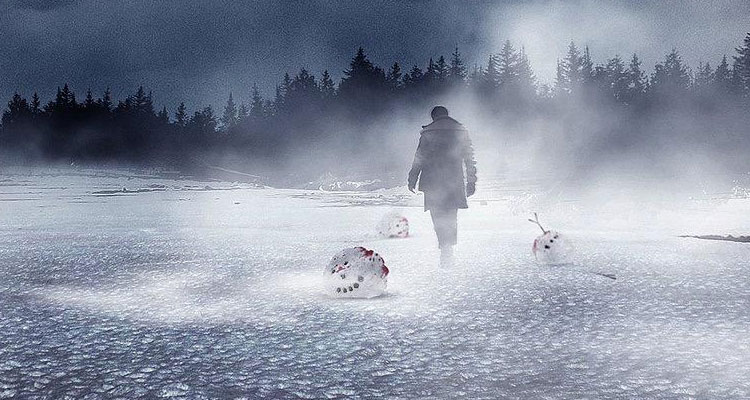 THE SNOWMAN (UK / Sweden / USA/15A/119 mins)
Directed by Tomas Alfredson. Starring Michael Fassbender, Rebecca Ferguson, J.K. Simmons, Charlotte Gainsbourg, Chloe Sevigny, Toby Jones, Val Kilmer.
THE PLOT: It’s a precarious time in Oslo. The city is bidding with other key cities to host winter games, led by local bigwig Stop (J.K. Simmons). On a more personal note, talented but maverick police detective Harry Hole (Michael Fassbender) is suffering withdrawal symptoms from not having a murder case to crack. He’s about to get a juicy one though. He’s approached by colleague Katrine (Rebecca Ferguson), who is investigating the disappearance of unhappily married women with children. A pattern is forming, with foul play suspected. Dismembered bodies are soon uncovered, with an anxious-looking snowman appearing nearby. A killer is on the loose and taunts Harry with his / her childish messages. Harry needs to pull himself together if he’s going to solve this…
THE VERDICT: ‘The Snowman”s only relation to its animated namesake is in the title. This is an altogether different film, a Nordic Noir with an international cast and with the backing of a Hollywood studio. It’s based on the seventh book in the Harry Hole series by crime writer Jo Nesbo, whose previous screen efforts include Headhunters and Jackpot. ‘The Snowman’ definitely cleaves more to the former in its execution, being a dark, intense and mostly humourless thriller that maintains a good pace throughout.
Having Tomas Alfredson as director is a major plus point for the film. The Swedish director of superior horror ‘Let The Right One In brings’ some chilly thrills to the proceedings. Dismembered bodies and decapitated heads feature throughout, but he makes the unusual choice of holding back on showing too much gore and instead emphasize the human horror of a dead body. He made a similar directorial choice of restraint in Let The Right One In and it works well here too. The Norwegian locations add an extra layer of atmosphere, moving from Harry’s collapsing apartment to swish city function rooms and isolated houses in the snow.
Harry himself is an interesting character – more three dimensional than the usual burnt-out cop on a killer’s trail. It’s what he doesn’t say that is interesting. Adding backstory with his former partner Rakel (Charlotte Gainsbourg) gives him a more rounded edge, no doubt helped by Fassbender’s typically well-judged take on the character. Two bum notes here are a ravaged-looking Val Kilmer, who pops up as a detective for a few scenes – not really adding much to the story. The years haven’t been kind to him and he seems to have suffered further indignity by being dubbed over by another actor. The other flaw is a bland reveal of the killer, who is ultimately a damp squib (literally).
That said though, ‘The Snowman’ is a reasonably solid genre effort that gets the tone, pacing and wintry atmosphere right for much of its running time. If Fassbender is looking to expand to other franchises beyond Alien and X-Men, then Harry Hole looks like a safe bet. There’s plenty of room here to explore this complex character. Sequel please.
Rating: 3.5 / 5
Review by Gareth O’Connor

THE RITUAL (UK/16/94 mins)
Directed by David Bruckner. Starring Rafe Spall, Robert James-Collier, Arsher Ali, Sam Troughton.
THE PLOT: Luke (Rafe Spall) is wracked with guilt after not intervening when his friend is killed by thugs in a shop. Six months later, the wounds haven’t quite healed yet. To the put the past behind him, Luke is going on a male-bonding hiking trip to the remote Swedish mountain forests with college pals Phil (Arsher Ali), Dom (Sam Troughton) and Hutch (Robert James-Collier). After paying their respects to their fallen colleague, they find themselves in dense forests where a mutilated bear is hung up in the trees like a sacrifice. Something is not right here. Seeking refuge from the weather, they stay in an abandoned house which has a pagan-like symbol upstairs. Nightmares ensue, time disappears and they realise that something in the forest is stalking them. An ancient evil that won’t let them go…
THE VERDICT: ‘The Ritual’ is a British lost-in-the-wild horror in the bloody vein of ‘Dog Soldiers’, ‘The Descent’ and more recently, ‘The Hallow’. At its most basic level, it’s a creature feature which conforms to the standard trappings of the genre: likeable characters going through a rough time in their lives; a confined environment where danger lurks in every corner and shadow; and a sinister force which is threatening their very lives. It feels familiar but director David Bruckner finds ways to keep the story moderately inventive, suggesting rather than showing the ancient evil that is hunting these men.
The script is co-adapted by Adam Nevill from his novel, along with Joe Barton. It takes a while to get going at first, with some shakiness in the characterisation. As the plot settles and the terror begins, the friendship between these four men becomes more prominent. Bruckner shifts gears here and introduces elements of the unknown – roars and crashing noises at night in the forest, followed by deep-voiced chanting. The sound design is particularly well used here, letting the audience fill in the visual blanks. It’s creepily effective at times, suggesting an otherworldliness to this Swedish environment.
Despite those initial wobbles, the film gradually gets better as it moves towards its conclusion. After building it up for so long, the creature is somewhat atypical for films of this type – but is nonetheless still unsettling. Those bright, Jawa-like eyes buried deep in the dark will put the frighteners on anyone. Bruckner suggests a backstory for the creature and why it’s there, but leaves it open to interpretation. Audiences don’t need to be spoonfed, particularly in a genre film where certain beats are expected. While it doesn’t re-invent the creature feature like ‘The Descent’, ‘The Ritual’ is still a decent enough effort that holds your attention. Being alone in a strange, foreign wood at night is enough to get those pulses racing.
Rating: 3 / 5
Review by Gareth O’Connor

LOVING VINCENT (UK / Poland, 12A, 94 mins)
Directed by Hugh Welchman, Dorota Kobiela. Starring Douglas Booth, Saoirse Ronan, Chris O’Dowd, Aidan Turner, Jerome Flynn.
THE PLOT: France, 1891. Armand (Douglas Booth) is a young man whose father Joseph (Chris O’Dowd) was a close friend of the late, great artist Vincent Van Gogh. A letter from Vincent to his brother Theo has come to light, written close to Vincent’s death from an apparently self-inflicted gunshot wound. Joseph tasks him to find Theo and deliver the letter, to give some sort of closure. However, the task is more challenging than appears. Theo has died in the last few months. Instead, Armand interviews a number of people including Doctor Gachet (Jerome Flynn) and his daughter Marguerite (Saoirse Ronan) who were near Vincent in his last days, painting out in the fields. The mystery deepens…
THE VERDICT: ‘Loving Vincent’ is a true cinematic experience, which makes it all the more a must-see film. Seven years in the making, part of it is down to the filmmaking style. It’s best described as a greatest hits package of Van Gogh’s paintings – in animated motion picture format. The film was shot in live action on basic sets against greenscreen. Then a group of 125 talented artists spent 2 years painting over the 12-frames per second to create a film that is in the visual style of Van Gogh himself. It’s similar in style to Richard Linklater’s rotoscoped efforts, Waking Life and A Scanner Darkly, but entirely original in that it’s the world’s first fully oil-painted film.
Shooting in the boxy academy ratio to fit the ratio of Van Gogh’s paintings, husband and wife co-directors Hugh Welchman and Dorota Kobiela whisk the audience away into the world of Van Gogh, with the animation taking on a shimmering life of its own. The visuals literally jumps off the screen – no 3D required. You can even see dabs of paint changing from frame to frame, second to second. There’s a remarkable level of detail in both the painting and animation. Yet, the continuity between all the artists is seamless and fluid, so it becomes a continuously moving painting. In more ways than one.
The visual experience of the film wouldn’t work unless it was anchored to an evolving, involving plot. Perhaps taking Citizen Kane as a template and using interviews and records from the time, Welchman and Kobiela structure their story as a mystery, with Van Gogh framed through the various people who knew him. Each of them have their own particular take on him – why he killed himself, did he really commit suicide, was someone else involved, was his Lust For Life too much for him to bear? The film becomes quite moving in this sense, painting a portrait of a tortured artist who while in the midst of despair also sent out some hopeful, optimistic letters to his family and friends. There was more of life than of death about him.
‘Loving Vincent’ is a true original – a unique tribute to the life and work of Van Gogh. It dazzles the eyes while engaging the brain, giving food for thought and admiration at the painstaking filmmaking required to bring it to life in all its artistic glory.
Rating: 4 / 5
Review by Gareth O’Connor