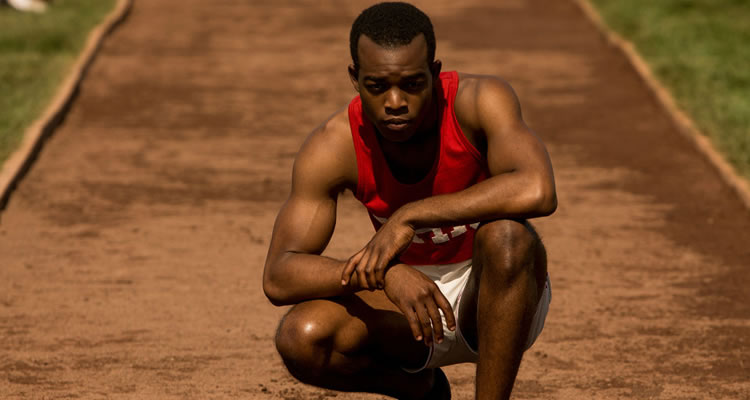 RACE (Canada | Germany/PG/134mins)
Stephen Hopkins. Starring Stephan James, Jason Sudeikis, Carice Van Houten, Jeremy Irons, William Hurt.
THE PLOT: While attending Ohio State University, a young Jesse Owens (Stephan James) shows a talent for track and field sports. Under the training of Larry Snyder (Jason Sudeikis), Owens blossoms, becoming one of the greatest athletes of all times, and going on to compete in the 1936 Olympics in Berlin, the Olympics overseen by Joseph Goebbels (Barnaby Metschurat) and Hitler’s Nazi regime.
THE VERDICT: The story of Jesse Owens and how, as an African American man, he came to compete in the notoriously racially divided Olympics in Berlin is a fascinating one, but in trying to tell too much, director Stephen Hopkins loses the main focus of the story.
Stephan James does well enough in the lead role as Jesse Owens, making him tenacious and cheeky, but also respectful and engaged. There are times when James struggles to make the film work as well as it could, but this seems to be largely down to the screenplay, rather than any fault of James’ own. Jason Sudeikis does well in a rare dramatic role; Larry Snyder is a driven man who is determined to get the best from James, and makes the character engaging to watch on screen. The rest of the cast features Carice Van Houten and Jeremy Irons – who both struggle with strange accents – as well as William Hurt and David Kross.
Screenwriters Joe Shrapnel and Anna Waterhouse seem to have decided to tell the entire story of Owens’ college life, right up until the time he decides to compete for the Olympics. This is fine in theory, but with the story of young love leading to a child outside of marriage is skimmed over, as is the lead up to Owens setting three new records at a track and field meet within the space of 45 minutes. When we actually get to the Olympics, there are three different storylines going on; how the US came to compete in the controversial Games, Leni Riefenstahl (Van Houten) famously filming the Games, as well as Owens’ successes and famous rapport with German athlete Carl ‘Luz’ Long. Each of these stories is an interesting one, but in trying to tell all three means that the film feels fragmented and none of the storylines is given the focus it deserves. As well as this, the title of the film – ‘Race’ – is just a little too on the nose.
Director Stephen Hopkins is best known for his work on TV – ‘House of Lies’ and ’24’ to name but two – and this inexperience in films is obvious in the film. There is enough material here to make a strong TV series, but in trying to tell this in 134 minutes, the strength of the tale is diminished. The pacing is strange, with large portions of the film spent away from Owens, so the film feels drawn out and flabby in places. The performances are strong for the most part, with many of the problems with the film coming from a split focus, rather than weakness on the actors’ part.
In all, ‘Race’ is a film that tells a powerful story… In fact, three powerful stories, and it is this split that weakens the film from being a strong look back at history and one of the greatest athletes to come up through the college sports system at a time when African American segregation was still rampant in the US, to trying to tell too much. In the end, ‘Race’ tells too much of everything, and not enough of Jesse Owens and his skill as a sportsman.
RATING: 3/5
Review by Brogen Hayes

Review by Brogen Hayes
3
Does too much