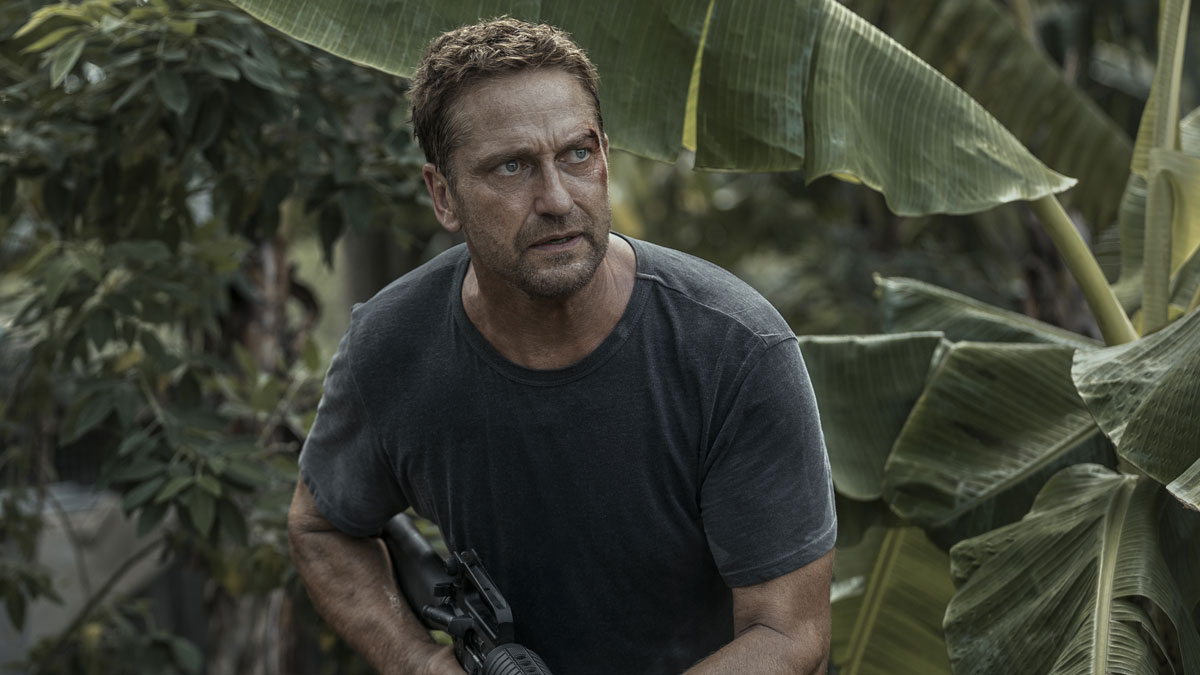 The Plot: It’s New Year’s Eve in Singapore. Captain Brodie Torrance (Gerard Butler) reports for duty on his civilian airliner. It has a small number of passengers, along with late-addition Louis (Mike Colter) who is being extradited on a murder charge. En route to Tokyo, the plane goes through bad weather and is struck by lightning. Losing power fast, Brodie has no choice but to make an emergency landing on an island off the Philippines coast. Expecting a rescue crew, instead he discovers that the island is controlled by dangerous separatists who value hostages. Desperate to protect his passengers, he forms an uneasy alliance with Louis to get everyone off the island…

The Verdict: Plane is a non-descript sounding title, but it’s also what lead actor and producer Gerard Butler insisted on for this sweatily efficient action-thriller. His instincts were correct on the straightforward title, as Plane is one of those unpretentious genre films that does exactly what it says on the tin but keeps itself ticking along quite nicely too. Its premise is equally straightforward, dropping a civilian airliner into hostile territory and then turning up the heat on the characters to see just how they’ll get out of this increasingly sticky situation. Added to that is the random element, a criminal who becomes an unlikely ally as he too feels the heat around the corner. It’s familiar territory then for director Jean-Francois Richet, having made the surprisingly decent remake of Assault On Precinct 13. He’s a good fit for the material, keeping it taut and focused on a few key characters and one brave captain who is handy at suppressing aggressive passengers.

The script by Charles Cumming and J.P. Davis is very much of the old-school flavour, a throwback to the kind of lean action-thriller that populated cinemas, video shelves and TVs in the 1980s and 1990s, possibly featuring Chuck Norris or The A-Team. The politics of the environment are kept deliberately murky of course (a trick possibly borrowed from the Top Gun films). It’s enough to know that these heavily-armed separatists are the bad guys and our flight crew and passengers want to make a quick exit before it’s too late. This is played out with something approaching real-world plot mechanics of the situation, with airline management back in America figuring out how to extract everyone safely with the help of snarky fixer Scarsdale (Tony Goldwyn owning the room). Look a little closer and the script isn’t up to all that much. The passengers are as blank and underdeveloped as the separatists, reduced to one-note descriptions (the difficult one, the foolhardy one etc). Character arcs could be a little smoother too – Brodie just wants to get back to his daughter. Noble enough.

That said though, Plane makes up for its script shortcomings by comfortably delivering on both the action and thriller fronts. Richet ramps up the tension when required, delivering some frenetic, bone-crunching fight sequences and shootouts. All that’s missing is a slow-motion flying body from an explosion. He doesn’t jump to these sequences straight away though, preferring instead to explore the options for this sticky scenario first and then build gradually towards intense conflict on the ground. Butler, a stalwart at this kind of role by now, brings a reliably sturdy presence to the screen and keeps his Captain Brodie vulnerable but quick-on-his-feet and with a few surprises up his sleeve. There’s a welcome line of humour too in his unlikely buddy bromance with Mike Colter’s smooth-talking criminal. Plane is an occasionally bumpy ride, an economy experience which skids wildly off the runway at times. But thanks to Butler and Richet’s focused approach towards efficient genre filmmaking, it does achieve flight though and thrills and entertains in equal measure. Fasten your seatbelts and prepare for a wild ride.

In short: Fasten your seatbelts