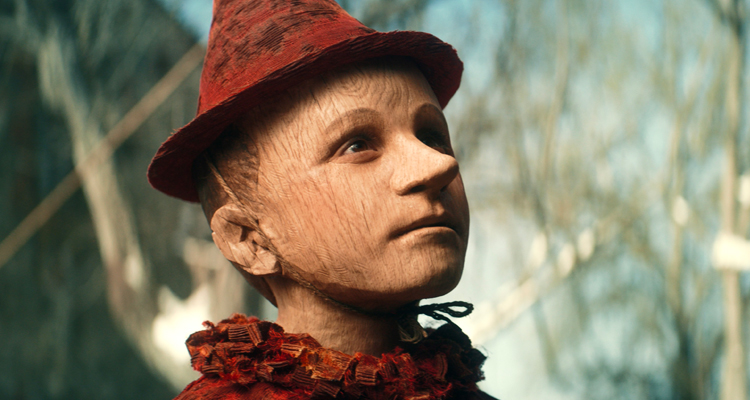 The Plot: Carpenter Geppetto (Roberto Benigni) becomes enchanted with a puppet show that visits his small Italian village. He buys a piece of wood that seems to have a bit of personality and fashions it into a puppet boy whom he calls Pinocchio (Federico Ielapi). To his surprise, Pinocchio comes to life and the two bond as father and son. Pinocchio has a curious spirit though, so he ends up joining the puppet show where he’s among people like himself. Now on the road and far from home, he encounters all manner of human and animal characters. Some are helpful and friendly, others plot to use his talents. Fata (Marine Vacth), a fairy, watches over him though in his quest to return home…

The Verdict: While Disney films may be in short supply at the cinema in the current climate, there are alternatives for parents seeking to entertain their children away from the box in the living room. Matteo Garrone’s gorgeous new Italian production of Pinocchio fits the bill nicely, a quality family film that is also available in a dubbed English version. It’s not a Disneyfied version though thankfully (we can expect that in due course with the in-development Tom Hanks and Robert Zemeckis remake). For this comes from the mind of Garrone, a talented director who has varied wildly from the hard-hitting crime drama Gomorrah to the adult fairytale anthology Tale Of Tales. With Pinocchio, one senses that he wanted to make a film for his 11-year-old son Nicola. The result is a film that crosses both the mainstream and the arthouse to become pure magic.

Garrone’s take on the classic fairytale about the puppet who wanted to become a real boy leans towards the style of magical realism. He sets the story in a world which is familiar and yet strange, a place of rural towns and human farmers but also occupied by puppet and animal characters in humanoid form. The puppets are not the stringy Thunderbirds-type but actors in agreeably convincing make-up (including Pinocchio himself, taking 3 hours to apply to young actor Federico Ielapi). Going down the physical make up route gives the film a tactile quality that CGI can’t replicate. The visual imagination on display here is quite startling, from foxes and hares to monkeys and tuna fish with human faces. Like any good fairytale though, there is an element of darkness to balance things out, hence the 12A. A transformation scene is certainly eye-catching. Not too dark though.

Garrone is faithful to the essential elements of the fairytale – the growing nose, the donkey, the big fish, the fatherly love between Geppetto and Pinocchio. To spice it up, he plays around with it to give it his own distinctive stamp. Otherwise, why make another version of this oft-told tale? Particularly when his lead actor Roberto Benigni directed and starred in his own 2002 version as Pinocchio himself. Now older, the once-toast-of-Hollywood Benigni is a more natural fit for Geppetto. His lightness of touch and amiable performance is a beam of sunlight, working well with Ielapi whose performance comes through the make-up in his own way. The supporting cast is good too, with the actors amping up the otherworldly aspect. A little more Benigni wouldn’t have gone amiss though, as he departs the film for a while.

This is a Garrone film through and through, as cinematic as it comes. Beautifully shot mostly in the Apulia region of Southern Italy, it’s a feast for the senses with matching production design and an evocative score from Atonement composer Dario Marinelli. With veteran British producer Jeremy Thomas on board as well, Garrone quite comfortably sidesteps the potential for it to be a europudding production. Fun for all the family, it should delight children and entertain parents in equal measure.