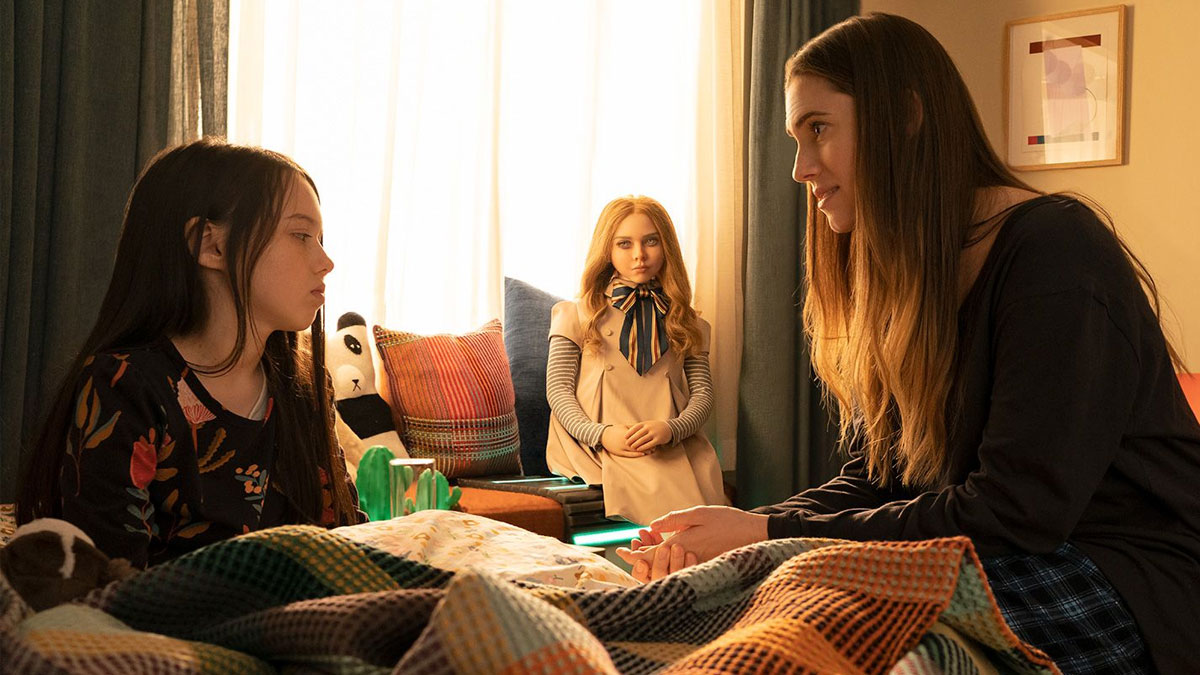 The Plot: Following the death of her parents in a car crash, young Cady (Violet McGraw) comes to live with her aunt Gemma (Alison Williams). She’s not quite ready to take on the burden of a grieving child, but she learns to adapt. It helps that Gemma is a toy designer and inventor, working on the next generation of a fluffy animatronic toy. What she really wants to develop is something to help Cady deal with her loss and so she resurrects a robotic doll project whom she dubs M3gan or Megan (voiced by Jenna Davis). The doll knows how to comfort Cady and instruct her, like a loyal companion. Cady becomes too attached to M3gan despite Gemma’s concerns, but the doll doesn’t like being pushed around and has other ideas…

The Verdict: It all started with the creepy clown doll in Poltergeist. That’s what set James Wan off, stalking his childhood nightmares. Since then he hasn’t looked back when it comes to depicting the terrors of dead-eyed dolls, whether in Dead Silence, Saw and Annabelle. Drawing from a long legacy of demented dolls in cinematic history, he’s conjured up another ghastly but equally memorable creation to sit on the top shelf far from the reach of curious children in M3gan. Written by Akela Cooper from a story by Wan, it’s what one might imagine if you scanned Chucky, Esther from Orphan and The Terminator into a computer. Out comes the kind of doll that looks sweetly innocent, helpful and kind… but that’s really just a mask for an observant artificial intelligence that tolerates petty human beings up to a point. It’s a cautionary tale of technology run amuck of course, but it’s done with tongue firmly impaled in the cheek along with a side helping of delicious attitude.

What sets M3gan above the usual demented doll and cookie-cutter studio horror is just how funny and self-aware it is. The script has been pared back to a lean, mean wannabe killing machine that gradually teases out its concept. Wan is a busy man these days with a possible final Conjuring film in the works, so Gerard Johnstone has the director’s megaphone here. In only his second feature, Johnstone latches onto the concept with gusto and keeps in tune with Wan’s tone in the script. He doesn’t leave any ambiguity floating around about the doll, unlike in Annabelle. He clues in the audience early on, comfortably allowing them to be several steps ahead of the characters as they come to realise just what is happening with M3gan as she talks back and gets a little knife-happy with the locals. That self-awareness is smartly controlled to be either subtle or loud depending on M3gan’s interactions with the human characters. She’s a boxful short of microchips to be another D.A.R.Y.L. though. Beware. This robotic doll bites.

This is where the humour really stands out, delivered with note-perfect innocence and dripping attitude by the voice of M3gan, Jenna Davis. Sounding like a passive-aggressive teenager who is smarter than the adults in the room (which she is), M3gan is a fully-formed character in her own right. M3gan has a standard blank expression, but it subtly changes from scene to scene hinting at a darker intelligence plotting away while her human companions sleep. She’s a different kind of Bad Robot. Playing a lot of this for laughs (of which there are many) is a risky business, potentially dislodging the more horrific elements (pared back for ratings reasons, but the kills are still effective enough). However, Johnstone strikes the right balance of tone between horror and comedy here to send the film out on a thrilling and entertaining high. January is either populated by either Awards Season potentials or regarded as a studio’s dumping ground for lesser films. M3gan looked like it might have been the latter and not compute, but it’s far from it actually. It’s as smart and razor sharp as its title character and gets the bloody New Year off to a killer start. Highly recommended.