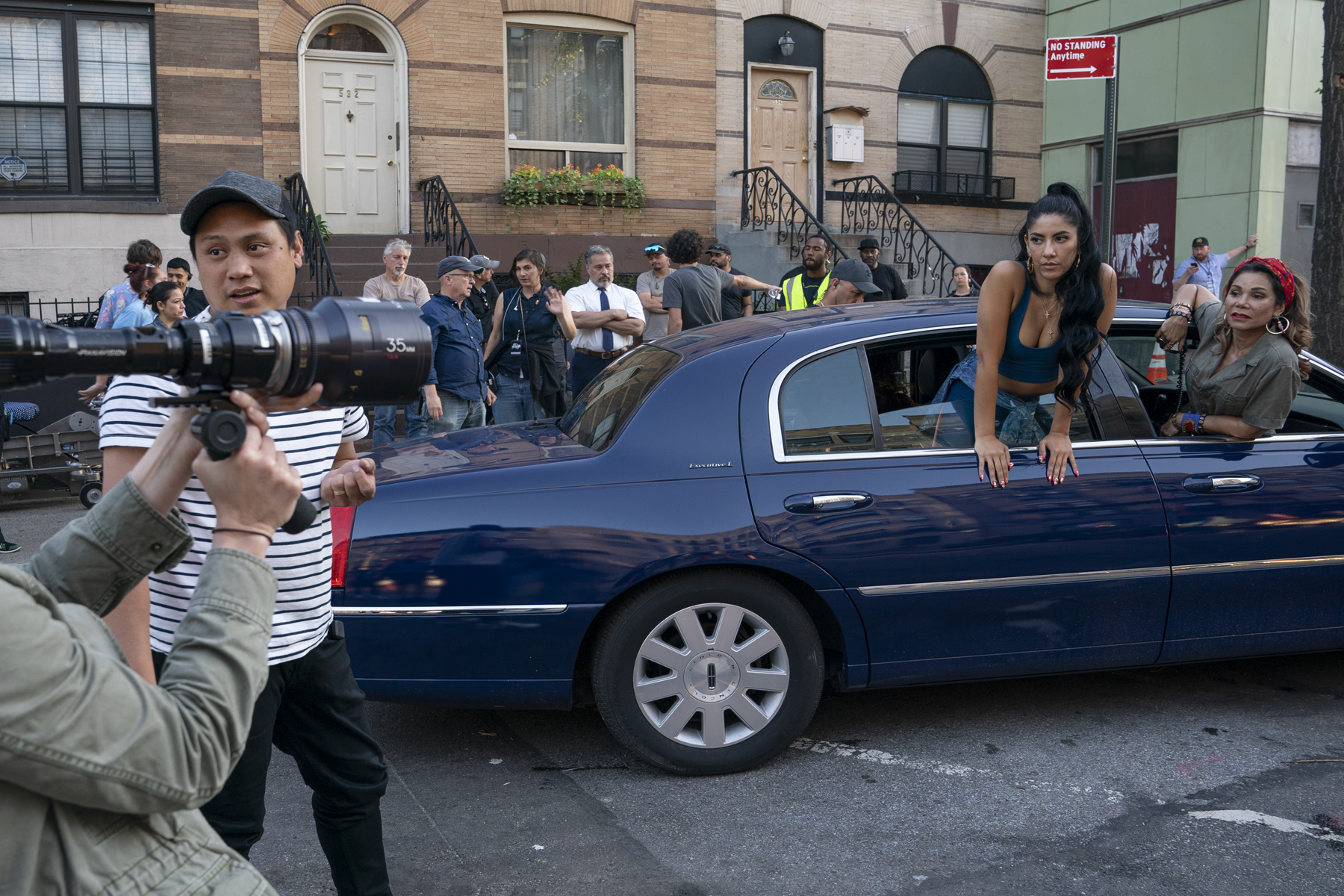 Interview with IN THE HEIGHTS director Jon M. Chu

It’s a hot summer week in the upper Manhattan borough of Washington Heights. As the clock ticks down to an impending black-out, we meet the colourful characters in this lively Latinx neighbourhood. Usnavi (Anthony Ramos) runs a grocery store, but is holding on to his ‘el suenito’ – his little dream of returning to his childhood home in the Dominican Republic. Now pushing 30, he’s keen to move on and find a better life. The sassy woman he has his eye on, Vanessa (Melissa Barrera), wants to move on from working in a salon to starting her own business. Their friend Nina (Leslie Grace) is on a break from Stanford University way out west, something which troubles her father Kevin (Jimmy Smits) and her boyfriend Benny (Corey Hawkins). Somewhere on these streets, in this barrio, there’s an answer for them all…

We caught up with director JON M. CHU for a behind the scenes chat about the highly anticipated musical.

Were you a fan of the stage production, and is that one reason you wanted to direct the movie?
Oh yeah, I never thought I could be, but I remember watching it after shooting my first movie, Step Up to the Streets, and I was invited over to watch it, one of our dancers was in it, and I was blown away. I was so moved; I related to it so hard. It was everything I wanted to talk about in my family even though I’m not from Washington Heights, I’m from California, and I’m not Latino. Lin [Lin-Manuel Miranda and Quiara’s [Quiara Alegría Hudes] genius is that they can speak to people all around the world through their very personal experiences. It just blew me away, so the fact that they came to me a decade later was an honour.  I knew that I could at least open the table up to make our process something that we could make together. It wasn’t just me saying, here’s the portrait of what I could do with your musical; this was like, how can we make it better, what can I use my cinema skills to make room for in your story.

It is Lin-Manuel and Quiara’s baby. Did it reach a point where you said this is now my film, or was it collaborative?
You couldn’t ask for better creative collaborators in that they never made me feel like this was theirs, and they never made it feel like they weren’t there for me when I needed them. They were not precious with things; they were ready to mould it and take it apart and put it back together, and I hope they felt the same way that I knew that I wasn’t making the movie on my own. We were making some choices to see what happens, and then we could always put it back if it wasn’t the right choice. And we did that several times. So, I think it was a circle of trust; we created a family. I think that’s also Quiara and Lin’s superpower because what they make creates families and creates communities beyond the story itself and beyond the product they’re making.  The people they work with work, they work with them over and over, and they love doing what they’re doing, and they believe in a higher purpose for what they’re doing. I got to learn from the best of how to do that, and I hope that in our movie, you can feel the love through every pore of it.

You come from a background of dance films, but the scenes in this are so big, particularly the pool dance. I don’t remember a movie with this many dancers since the Golden Age of Hollywood. How did you bring it all together?
We knew we would be on a tight budget; we don’t have the budgets of all those other big musicals. Our producers, in the very beginning, asked me, what do you want me to protect? What is your number one priority before we start budgeting? And I said the number of dancers. I said this movie is about bodies; this movie is about seeing bodies, seeing people and seeing people do this stuff. I know dancers, and I know they’re going to be the biggest value because they are the easiest thing to cut. Each person is equal to someone that you have to have a costume, and you have to feed them. I said, protect that number one, I’ll figure everything else out. I’ll make sure it cuts in other ways, but we have to protect the bodies, and we need to show all varieties of bodies, all shapes and sizes, all ages, all skin tones. I think that that’s what you feel what people say, this feels like such a New York movie. I’m like, hell yeah, and you want to know why? Because all these people of colour make up New York City, they’re the essence of what New York City is. So, yeah, it’s a lot of logistics, but it was literally then the priority of our movie.

This film took years to make, but it feels like right now, it’s more important than ever. We see more diversity thanks to directors like yourself. Do you think that, particularly with what has recently happened in America, it is more relevant now?
Yeah, I mean, I think it was always relevant to be out. I just think it was never done. I’m proud that I’m a part of that. We’re not alone doing it, and we shouldn’t be alone in doing it. I think we are the results of a lot of other people’s work that has got us here, and I hope that it encourages others and other filmmakers. There’s no way that this one movie can encapsulate a whole community of people and cultures from all different places and all different countries. This is one thing, but I hope it encourages others. I hope it makes movie stars of these actors, so whatever movie they’re in, they’re the stars, and it creates more lanes for everybody. I’m really proud because I know I fell in love with movies because they were powerful in my life, and I know that young people, older people wherever you are if you take the time to watch a movie, you can’t unsee the things you see. If we can share our neighbours, and you can be curious and oh what food is that? Oh, what music is that? Oh, I want to learn how to dance like that?  I’m going to go on YouTube and learn, and then you ask your LatinX friend how to do it? What does your grandma make? How do you do that? Then that’s community, that’s real community, that’s what we need to get to as a world.

You mentioned community; you can feel life in every element of the film. Was it important to film in Washington Heights?
That was the number one thing from the beginning that when Lin and I sat down, we were shooting this in Washington Heights. How can you call it, In the Heights and not be in the Heights? We would be laughed at. It was the best decision. Washington Heights wasn’t just a place to shoot; it crafted the whole movie. Lin showed me where he shot videos when he was a kid, and Quiara showed me the pools where they spent their summers, and we had to get [these places] in the scripts. It was our co-writer, in a way, this neighbourhood. It wasn’t just people in the shots with us because they were background or dancers, and they were hanging from the windows cheering us on when they would dance. You have no idea how an actor lights up, how dancers light up when people have their flag hanging outside the window as they’re dancing in the streets. We cried almost every day at how emotional that was.

IN THE HEIGHTS is at Irish cinemas from June 18th