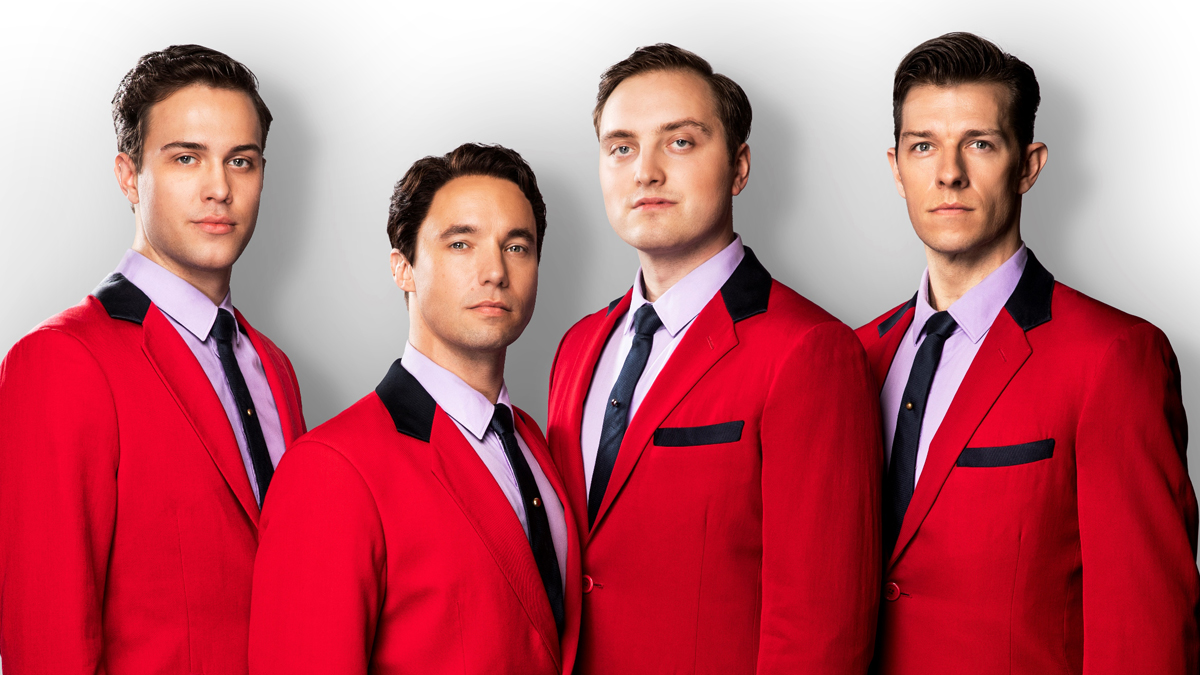 With JERSEY BOYS arriving to Dublin’s Bord Gáis Energy Theatre this month we caught up with RICK ELICE who wrote the stage show & Clint Eastwood’s movie adaptation to talk about the stories long lasting legacy.

The stage show is a Tony, Grammy and Olivier Award-winning musical which follows the rise of the iconic Four Seasons, a band with a unique sound and massively successful hit songs, including Sherry and Walk Like A Man. The story of the show, and movie, charts the bands early days in New Jersey, their run-ins with the mafia, and what happens when they hit the big time.

The show hits the Bord Gáis Energy Theatre from 2nd to 12th November 2022.

Jersey Boys is almost twenty years old and just as popular as ever. How does that feel?
It’s amazing. On November 6th, it will be 17 years since it opened on Broadway, and 18 years ago, we were playing in Southern California. We imagined that nothing would ever happen, and no one would ever come to see the show. In America, before the British Invasion, there was the Beach Boys, which was the California Music and then there was the Four Seasons and bands like that, which were the East Coast New Jersey, New York music. When we launched this first in a theatre in La Jolla, California, north of San Diego, we didn’t expect anyone to come, but audiences somehow liked it. The next thing we knew, we were hustling producers to bring this to Broadway, and the rest, as they say, has gotten us to the River Liffey.

Were you familiar with the Four Seasons, and what made you want to bring their story to the stage?
As a kid, I was familiar with their music from summer camp. I was a New York City kid and New York was extremely hot in the summer, so my folks sent my brother and me up north, where it was slightly cooler. There were these older boys who looked after us; they were the camp counsellors. They were 18 or 19, and I was five or six. I never had control of the music in my house. We had one radio and one tv, and I was the runt of the litter, so I got to know rock and roll from these older kids, these 18/19-year-old counsellors playing the music they love. That’s how I became familiar with the liberal music of the 60s and rock’n’roll, and it introduced me to the bands I love. I was familiar with the Four Season’s songs, but I never knew they were from one group. The groups I liked, The Beatles, The Stones, and The Who, were written about in magazines and newspapers, but the media didn’t write about the Four Seasons. They didn’t have long hair or exotic accents. They didn’t come from across the pond; they came from across the river. New Jersey has always been the joke state, as far as New York is concerned, so they were never written about. Like many people, I thought that band consisted of three guys and a girl; it was hard to pin them down. Frankie Valli is the frontman and not a frontwoman; he is famously known for his high falsetto voice. As a kid, I had no idea what the gender of the singer was, and because they weren’t in magazines, there was no way to know. Many years later, when somebody called me and asked if I would be interested in having lunch with Frankie Valli and Bob Gaudio, the group’s principal songwriter, I was astonished when I looked at their song list. They had so many. I was sitting with them at the back of an Italian restaurant on 46th Street in Manhattan, asking simple questions like what was it like to be you? What appealed to me instantly about these guys and everything they went through was the role the mafia played in their lives growing up and how that role played in their careers as a band. It was astonishing; a story like this is catnip for a writer, so that was when I thought, let me take a crack at this. They wanted to do a Mamma Mia gag where you take a bunch of songs and retrofit the songs to a story. It would be a little silly and fun, but it was not how their story should be told, so we went in a different direction.

For many people, Frankie Valli is the only Four Season they can name, but the show gives each band member their own act in the musical. How important was it to make sure each person became known in their own right?
I want to say that we were very intelligent and decided to do it because it was a very intelligent thing to do. What really happened was three of the four guys were alive, and the fourth guy, Nick Massey, had passed away, so we never even got to talk to him. One of the guys, Tommy DeVito, who wanted to be a gangster more than a musician, was in Las Vegas and not available to talk. So, we spoke a lot to Frankie and Bob, and we noticed that every time they told a story, it would be the same and then suddenly, it would be different. Then the next time, we would ask, and it was different again. My writing partner, Marshall Brickman, and I started asking ourselves, whose version is the true version? Who should we believe? Finally, we got to speak to the third guy, Tommy. He was in Vegas on the phone, and we were sitting in the same room looking at each other, and Tommy said, oh, don’t listen to them. That’s just all a lot of crap. I’ll tell you the real truth. Suddenly this light bulb went off; what if we don’t tell the real truth? What if we tell the story from each of the four guys’ points of view and let the audience take sides depending on who they like or believe? I’ve always been a theatre geek, and I couldn’t think of a show that has done that since Shakespeare. I, of course, never mentioned that because you never mentioned Shakespeare in New York back then; they’d think your old hat or box office poison or something like that. But I thought this could be a perfect way to tell the story because if you ask four guys what happens, you’ll get at least four different versions. So that’s what we wrote. It was very neat, of course, that they were called the Four Seasons. It fit very nicely into the overlay of mother nature’s four seasons; we were able to give one person spring which is the birth of the band, and another person narrates summer, which is coming into the full-blown success of the group. The third guy narrates the fall, the dissolution of the original quartet, and then we give Frankie the last word because he’s the front man, and we gave him winter because then the story becomes the winter of his discontent to refer back to the bard.

One of the things that I love, and it’s not something we often see in musicals, is that when they sing, they’re not singing to each other or the other characters. They are singing out to the audience. Tell me about the decision to do that.
I’m sure it was the director who had the moment of brilliance here and said that at the point where the songs appear, let’s have microphones rise up from below the stage and have the Four Seasons turn out to the audience and sing the songs as though the audience in the theatre is the crowd a club, the stadium, the recording booth and at the Ed Sullivan Show etc. What’s brilliant about it is that it casts the audience every night, as well as the actors on stage; the audience plays their part. What started to happen was the audience began to respond as though they were at a concert, as though they were in the club. And not just this polite theatre response, but a real rock and roll music response, full-throated, people are going crazy and screaming. It’s fundamental to the success of the show that the songs are never sung in the typical musical language where a character turns to another character whose name is Sherry and says, “Sherry, Sherry, baby,” starts to sing, and everybody rolls their eyes. Instead, they perform the songs in a performative way, as though they are the group, and you are the audience hearing that song being performed for the first time. By golly, it seems to work; the audience accepts those four guys as the Four Seasons.

The story is niche to New Jersey, but the themes are universal. Do you think this is why it has travelled so well?
Fiddler on the Roof is a story about Jewish peasants in Russia being thrown out of Russia by Cossacks, yet it plays in Japan, and people see it as a Japanese story. The story’s plot isn’t really about Jews or Russians; it is about children saying to their parents, I don’t care how you did it. I want to do it my way. Every child around the world knows what that feels like. I don’t have to be a Broadway dancer to identify with the characters in A Chorus Line because everyone knows what it’s like to stand in front of somebody and say, I need this job. Give me this job. These shows run and run and run and connect, not necessarily because of the plot but because of what’s going on with the characters. Everyone’s been part of a group, either a band or a football club, a church group, whatever it is, these groups become second families, sometimes very dysfunctional families. Sometimes the bonds are stronger than they are with our actual families. Sometimes we take them for granted, and sometimes we screw them up. When our show tells the story of this particular group, the Four Seasons, it’s hard not to be touched by those eternal issues of wanting to belong, achieve, be respected, and find a home. We recognize what happens to them because we have lived through our version of those things. Audiences laugh and have a great time, and they are moved. Everybody identifies a little bit with it because we’ve all been at one point in our lives. We’ve all been part of a group.

For audiences coming back to see it again and for those who haven’t seen it at all, what do you want them to take away from seeing it?
In three words: family is everything. These guys spend their whole lives and spend the entire show trying to get out of the old neighbourhood. Of course, you can take the guys out of the old neighbourhood, but you can’t take the old neighbourhood out of the guys. This feeling of belonging goes beyond the family we’re born into; it’s the family you choose, whether it’s Dorothy and the Cowardly Lion or Frankie, Bob, Tommy, and Nick. They recognized something in each other, they bonded, and those bonds were like iron. They could mess with each other and be angry with each other, but nobody else from the outside could interfere with that. That’s because family is everything, and that’s what I’d love for people to take away, the idea of family and what that means and how that carries us through, especially at times like these.