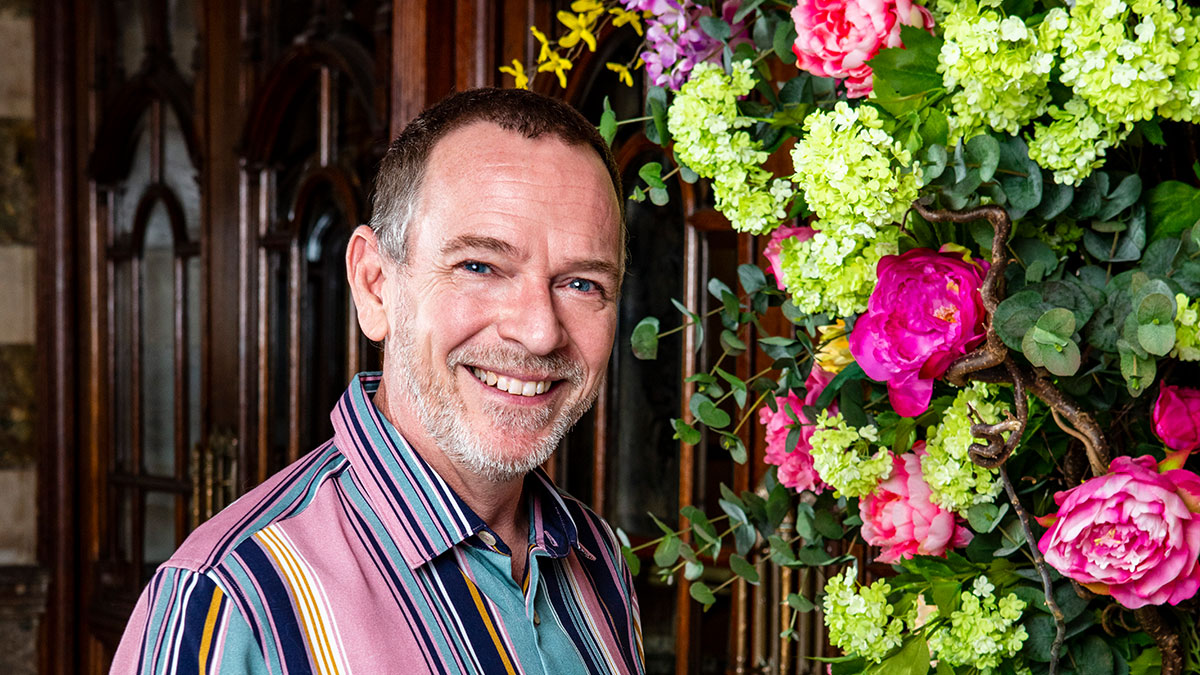 Eliza Doolittle and My Fair Lady have been wowing audiences for decades. Adapted from GB Shaw’s 1913 show, Pygmalion, Lerner & Loewe brought My Fair Lady to the stage for the first time in 1956. Since then, the show has won many awards and was brought to the silver screen in 1964 when Audrey Hepburn took on the role of Eliza, a Cockney flower seller whose life is changed by an encounter with the well-to-do Professor Higgins. Soap icon Adam Woodyatt who played Eastender’s Ian Beale for over 30 years, shakes off his soap persona to play Alfred P Doolittle, Eliza’s father. We spoke with Adam and found out why he wanted to be part of this extravaganza that comes to the Bord Gais Theatre this October.

For more about the show visit https://www.bordgaisenergytheatre.ie/show/my-fair-lady/

What about My Fair Lady made you want to be part of the show?
How could you not say yes to My Fair Lady? It’s such an iconic show. The chance for me to play Eliza do…, Alfred Doolittle, sorry, I’m not Eliza. I played Eliza in rehearsal. Charlotte [Kennedy] was still on stage in a show, and they needed somebody to play Eliza, so my hand went up to be her. I am playing Alfred P. Doolittle, one of those iconic roles. When it comes around, and somebody says do you want to play it? The answer is yes. You’d be a fool to say no. Not many people have a chance to play Alfred Doolittle. It’s not a show that comes around very often because of its scale. It hasn’t been out on tour since 2005. We’ve got a 30-piece orchestra and a massive set. We’ve got a huge ensemble, I don’t even know how many people we have, but it is an absolute beast of a touring production.

I believe it’s been a long time since you sang on stage. What was it like finding your voice again?
It’s been an interesting process. It’s been an enjoyable process. But no, I haven’t sung in a musical since I was 12. It has been 42 years since I’ve done a musical. Getting used to singing out loud and in front of people again has been a process. My singing has been confined to the shower for years.

Is it daunting or exciting? Or both?
A bit of both. I’m not going to lie; it is daunting. I’m on a stage with Lesley Garrett, that girl can sing. Jeez, can she sing? One day in the London Coliseum, she stood in what she called the sweet spot and filled the theatre with sound. I didn’t realise that is where she’d done most of her singing; she’d worked there for 15 years. The cast is so scarily talented that it is a little bit daunting, but it is great fun. I’ve got the two fun numbers.

Those two songs are iconic songs. What is it like to perform them?
It’s going to be a lot of fun, especially Get Me to the Church on Time. The way Bartlett [Sher] directed it, there is a lot of fun; a debauched night out in Dublin is the best way of describing Get Me to the Church on Time. Everything happens, and it’s all crammed into this eight-minute section, which is joyous and funny. It’s a lot of energy. I’m sweating by the end; it’s probably about the equivalent of doing a two-mile jog. I want to try and get as much fun and enjoyment as possible into the number.

You mention the scale of the production and the size of the set. What is it like moving from small television sets to a show this size?
You say that, but people don’t realise that the Eastenders set is huge. I haven’t seen the new backlot, but our Albert Square was the biggest permanent outdoor set in Europe, if not the world. We had an area about the size of the square outside the Bord Gais Theatre.

Then what is it like to be confined to a theatre stage after years on a large set?
They are two completely different mediums. I’ve started to remember why I fell in love with acting when I was a kid; it is the theatre; it’s the audience’s response. The stage process is much longer. You have time to remember it and learn it. Rehearsing, teching, and performing it given time as opposed to tv, where it is rehearsing and shooting it quickly. They are two completely different beasts.

When you have played one character for as many years as you played Ian Beale, I presume playing him is like putting on a pair of slippers that you have had for a long time, that there is a comfort in knowing him so well. What was it like getting to know a new character after 30-plus years as Ian?
It’s been brilliant. Listening to Bartlett and his knowledge is fantastic. He’s been doing this since it was at Lincoln Centre in 2018. He has done loads of research beforehand, and his knowledge of Shaw’s text and the Greek story that Pygmalion is based on has been fantastic. During rehearsals, he’s been imparting all that and letting you choose how you do things. It’s been a fantastic process. Whereas on TV, you have each line, you make that choice of how you’re going to say it, the director is going to have a bit of influence on it, but that’s pretty much it.

The film version of My Fair Lady is a beloved favourite for many people. Were you a fan of it, and have you rewatched it since you got the part in the show?
I’ve gone back and watched the film. I’ve trawled through YouTube and found all sorts of wonderful bits and pieces. It’s difficult because you want to bring your own thing to it, but there is only so much you can do. You can’t change the words, so it is about finding different ways of saying them and making different choices, but you’ve still got to retain who that character is and what he stands for. I genuinely have loved it. I run around rehearsals like an excited puppy. I’m probably driving them nuts. When I’ve finished rehearsal for the day, I will stay in a corner and watch the others. I’ve been watching how Michael [d. Xavier] has been making his version of Professor Higgins, how Leslie has been doing her Mrs Pearce. I’m watching everyone else’s process. It’s what I did as a kid at the National Theatre. I watched Guys and Dolls through their rehearsal process. I was working at Lyttelton Theatre [London] doing On the Razzle, and if I hadn’t gone to school that day, I would sit in and watch their rehearsals for Guys and Dolls. I saw Bob Hoskins, Julia McKenzie, David Healy, and Julie Covington. I’ve watched their rehearsal process for how they brought Guys and Dolls to life. I was a 13-year-old kid, and I learned so much just by watching how people go about rehearsals.

What is the enduring legacy of My Fair Lady? Why do audiences keep coming back?
I think you have to go back to the original, Pygmalion. My Fair Lady was based on this wonderful story with incredible characters and this great text that was ahead of its time when it was written in 1913. When the film was made in 1964, it was ahead of its time with this strong woman who stood up to this oppressive man. So, I think it’s as relevant now, if not more relevant, than it was back then.

For more about the show visit https://www.bordgaisenergytheatre.ie/show/my-fair-lady/