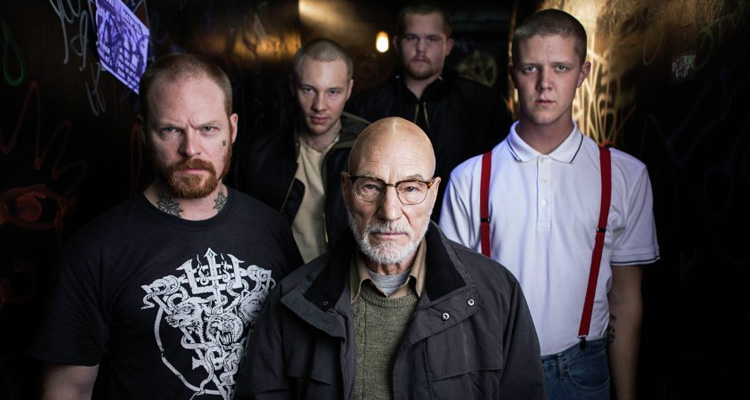 Jeremy Saulnier’s third feature length film ‘Green Room’ is released in Irish cinemas this week, and follows The Ain’t Rights, a young punk band who find themselves in a life or death situation after they play a Neo-Nazi bar in rural Oregon.

Although when Movies.ie met Saulnier on a beach in Cannes he looks more like a 90s skater than a punk rock director, this is exactly what he is; creating films outside the system that are violent, funny and irreverent. ‘Green Room’ is a step up from ‘Blue Ruin’, the film that finally got Saulnier international attention, and he has gathered a stellar cast for the film including Patrick Stewart, Alia Shawkat, Anton Yelchin and his regular collaborator Macon Blair. We caught up with the director to find out more about his punk rock slasher horror ‘Green Room’.

Is the punk rock scene something that is personal for you?
Jeremy Saulnier: Oh yeah! I grew up in that culture. I was in bands with my friends playing punk shows, and these were the same friends that I made films with, so on the weekends we would do punk rock shows and crazy bloody zombie movies. This film very much reflects that… Also, I feel like it’s a cheap version of ‘Mad Max: Fury Road’ [laughs], it looks awesome, the energy is there and also the risk of violence is there, because it’s a very violent thing. It can be very healthy and serve as a release, or it can be very negative and just breed hatred.

Did you always want to set something in this world?
JS: Yes. For 10 years. When you are a filmmaker who has not broken through without access to money or support in the industry, you worry that your idea is going to be taken, so I had to make it very fast. ‘Blue Ruin’ kind of paved the way… it was more contemporary for me, and more personal and emotional, and I love that story, but I had to take a step back and take care of ‘Green Room’ before I could move on. This was definitely for my teenage self, for all the friends that I knew in the scene, who I grew up with, making movies together.

The film is super gory and darkly hilarious; was the balance between the two difficult to strike?
JS: Ideally the cast doesn’t know when it’s going to be funny. They read the script and they can get the gist, but the key is that performance wise, if they are not deadly serious or completely grounded, then the comedy is just fabricated. I think it sort of rises naturally as I write these terrifying scenarios, and I let it seep through, but I would never try to inject it with too much intention. I keep it more contextual and less jokey, when possible.

Where did the idea of framing the movie around the question of Desert Island Bands come from?
JS: It definitely comes off as a gag, but it’s very symbolic for me. My Desert Island Band changed by the day; I have said Black Sabbath, today it’s Talking Heads, but other days it might be The Cure, I dunno! For me, the punk rock scene was such a definitive part of my life, and I truly loved it. Also, I felt from early on that it was fleeting. It’s alluded to in the movie; I’m not going to listen to too much hardcore when I am older, on a record player, because it is about being there and being part of the experience, the physical nature of it, feeling it and going crazy. That was about, maybe sometimes in the punk rock scene, when I would be dancing around in the pit and having a blast or on stage singing a song with my band, and I felt like an imposter. Like maybe my favourite band isn’t one of these bands that I am going to see their shows. Maybe I like Led Zeppelin instead. I just thought that was fun.

Did you have a list of actors in mind for the film?
JS: Because I wanted really great actors who were not familiar with the genre world so much… Maybe primarily cast in dramas… To give them the opportunity to be in this insane punk rock action movie, they just were flocking to it. The 25-and-under crowd was going nuts, so it was very easy to see audition tapes and cast the right people for the role Also, getting grounded actors who are very human and naturalistic was the key for me. Some auditioned on their own, some sent in videos, others came into Avy Kaufman’s casting room and just talked to me; they were all very generous and showed a level of dedication that was very important to me as a filmmaker because the last thing I want is an aloof, disinterested Hollywood star in a very intense type film.

Alia Shawkat’s character was originally written as a male character. What made you change the gender?
JS: I didn’t change a word! I know that world to be so male dominated that I just wrote it that way. It was a really lucky thing that happened there, when one of our awesome actors had to drop out because of a Disney shoot [laughs], it was really sad, but it opened up the door. We were talking at dinner, on location, trying to fill this role, and my producer had worked with Alia on another film and she suggested her. She submitted tape and she was just the best actor for the role. It was fun to see how perfect she was for it, without changing a word; it wasn’t about male or female, it was just a character. She owned it and added a very important dynamic to The Ain’t Rights as a band. That was very fortuitous.

Did you deliberately not have Macon Blair in the lead again on this film, since he was such a big part of ‘Blue Ruin’?
JS: He was such a big part of ‘Blue Ruin’ that I didn’t want him in ‘Green Room’, but he’s not the lead actor… If Macon was 15 years younger he’d be Pat, he’d be the main character. I was like ‘You can help me produce it and be my creative partner’ – which he was – but he also stuck around and submitted a self taped video audition, as a skinhead. He got his hair cropped very short, he got temporary tattoos of an eagle and a Swastika and he delivered an amazing reading. He won me over and earned the role fair and square; that was great because it wasn’t like I was throwing him a bone.

I never thought of Imogen Poots as a skinhead girl…
JS: That’s why I cast her! She was really aggressive about it. She was very kind and turned down another film to be in this, so that really helped me feel good. When people are enthusiastic you feel that, and that really helps the entire experience of the film itself. It’s contagious! Enthusiasm or toxicity can be contagious so we lucked out on this one.