The Plot: Blue Shirt Guy (Ryan Reynolds) is a non-playable character in an online videogame known as Free City. He’s not so free, just following his subroutines getting coffee, working as a bank teller and generally being non-descript. That is, until he runs into Molotov Girl (Jodie Comer), a too-cool-for-school ‘wearer of sunglasses’ i.e. an avatar being used by Millie (also Comer) in the real world. Something clicks in him and the innocent but brave Guy begins to question the nature of his reality when he puts on those famous sunglasses and sees the world anew. Meanwhile, in the real world Millie and game designer friend Keys (Joe Keery) clue into Guy’s self-awareness and see an opportunity to save the game from destruction from company man Antoine (Taika Waititi)…

The Verdict: Let’s imagine that actor/producer Ryan Reynolds and screenwriters Matt Lieberman and Zak Penn sat down with an artificial intelligence and asked it for ideas for a film. Apparently, this is an actual thing that’s happening right now in Hollywood when it comes to spitballing ideas for films. They feed in the following films: Tron, Ready Player One, The Truman Show, The Lego Movie and for extra nerd points John Carpenter’s They Live. The AI responds in milliseconds with a postage stamp concept about a non-playable-character (NPC) in a videogame that becomes self-aware and has some fun with that. That film is the one that is about to download into your eyeballs – Free Guy, a madcap adventure comedy that has Reynolds’ sticky fingers all over it but without his occasional smugness and need for self-referencing.

The actual origin is the famed 2016 Hollywood Black List of most-liked scripts. Five years and several pandemic delays later, the final output is an unashamed, good-natured crowd-pleaser that knows which buttons to press. It’s perhaps a pity that cinemas are restricted in their capacity, as crowd reaction is something to consider here – particularly when it throws in a laugh-out-loud cameo that won’t be spoiled here. The set-up tips its virtual hat to Tron, given that the real world characters are looking for some scuzzy data buried away inside the Free City videogame that could change everything. The game is controlled by an evil corporate overlord played by Taika Waititi in full volume gangsta rapper mode (very irritating). The key to finding that data lies within Guy, the NPC everyman who becomes self-aware and sets out to save his artificial world from immediate de-resolution.

Sure, it’s derivative of many other films but that doesn’t mean it’s game over from the first act. It’s the way that director Shawn Levy uses that referencing to build his own world inside and outside of the computer to power the plot through to its satisfying conclusion. He earns points early on by establishing the cheerful Guy as he goes about his daily routine, never questioning why things go crazy when the wearers of sunglasses pop up. Guy exists within the confines of his programming, but Reynolds does something smart with the character: sweetly innocent but edgy enough to hint at the joker and reluctant hero underneath the code. Jodie Comer, a TV actor who we’ll be seeing a lot more of in cinemas (e.g. The Last Duel) makes for a great contrast in characterisation and is easily the break-out star of the film. She’s able to ground both the videogame and real-world elements of her feisty character, letting the pixelated chemistry fly with Reynolds.

Whereas films involving videogames and videogame adaptations can often lose themselves in their technological wonders, Levy is more careful to balance out the elements here. After all, watching people in the real world looking at screens for extended periods isn’t particularly involving for an audience. Levy works around that by having a sense of urgency about Guy’s adventure, spurring him on to greater heights as he learns new skills – while Antoine perceives a threat to his game. Upping the stakes has the desired effect of Guy becoming a relatable character worth caring about. There are elements that don’t work – such as the aforementioned Waititi and an awkward love story sub-plot that comes in too late to mean much, but they’re minor faults. It’s hard not to grin as the credits for Free Guy roll, as wildly entertaining, funny and action-packed as it is. Mission accomplished then for Reynolds, Levy and co as they deliver a late summer blast of blockbuster fun worth throwing some game tokens at. 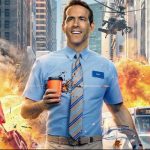