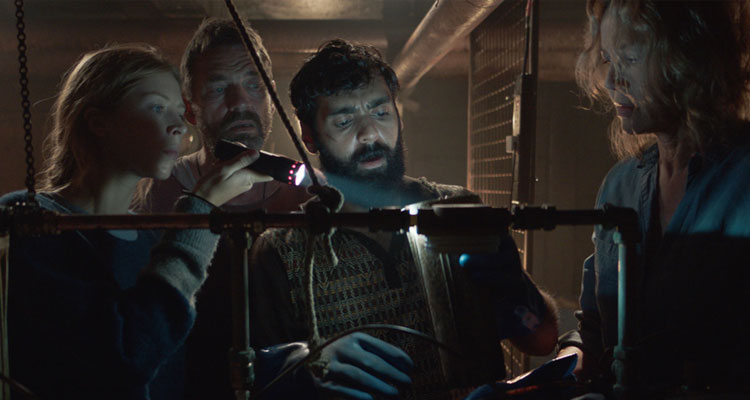 Now into the second month of lockdown, one of the things we miss most is the thrill of going to the cinema to see the latest releases.
While we can’t bring you a big screen, and can’t bring you freshly made popcorn, we can bring you news of FOUR brand new releases hitting digital release across Ireland this weekend.

First up is Irish horror film SEA FEVER, that has already gotten the seal of approval from the master of horror Stephen King on Twitter this week. Reminiscent of cult classics ‘The Thing’ and ‘The Abyss’, the movie follows marine biology student Siobhan (Hermione Corfield), on what was supposed to be a research excursion with a trawler crew fishing the West Irish seas. But when they hit an unseen object and become marooned, a mysterious parasite infects their water supply. Soon the oozing force infiltrates the entire vessel and turns Siobhan’s journey into a claustrophobic fight for survival. Can they stop the mysterious water borne parasite from spreading before it’s too late?

SEA FEVER can be watched on Volta.ie and all major streaming services.

2/ WHEN ALL IS RUIN ONCE AGAIN

Winner of several awards including Best Cinematography at the Galway Film Fleadh and Best Film at the Kerry Film Festival, this highly acclaimed documentary was filmed over a 7 year period amongst the communities of Gort in South Galway and Crusheen in Co. Clare where the filmmakers live. Capturing a rural community as a motorway carves through their land,  the film explores the twists and turns of the M17/M18 motorway.

The film was originally scheduled to tour a number of cinemas and access Cinema Clubs following festival acclaim but with cinemas and arts venues now unfortunately closed you can watch WHEN ALL IS RUIN ONCE AGAIN direct from your living room.

Boasting some of the best reviews of the year so far. Nick Rowland’s first feature is a gritty crime drama set in the West of Ireland. Cosmo Jarvis plays Arm, an ex-boxer caught between family obligations and criminal associations, where he’s ready to dole out beatings at the whim of his best friend, played by Barry Keoghan. We caught up with the director to chat about the film. Read the Movies.ie 4 star review here

CALM WITH HORSES can be watched on Volta.ie and all major streaming services from April 27th.

One of the biggest and boldest comic book films of the year gets a surprise release on digital formats to rescue the nation from lock-down boredom.
Fresh from cinemas, Margot Robbie stars as Harley Quinn. One minute she was at the top of Gotham’s underworld, untouchable due to being The Joker’s squeeze. Now she’s heartbroken and out on her own, with every hoodlum she crossed and double-crossed out for her pretty little head. Top of the list is Roman (Ewan McGregor), who has a habit of collecting the scalps of those who displeased him. He’s looking for a valuable diamond which will send him to the top of Gotham’s food chain. Harley comes into possession of the diamond or rather cheeky teenage pickpocket Cassandra (Ella Jay Basco) who has the diamond. On the run, they encounter worn-out cop Renee (Rosie Perez), Roman’s lounge singer / driver Dinah (Jurnee Smollett-Bell) and the mysterious, crossbow-wielding Helena (Mary Elizabeth Winstead). The party is just getting started…

‘BIRDS OF PREY And the Fantabulous Emancipation of One Harley Quinn’ is out now on all major streaming platforms.