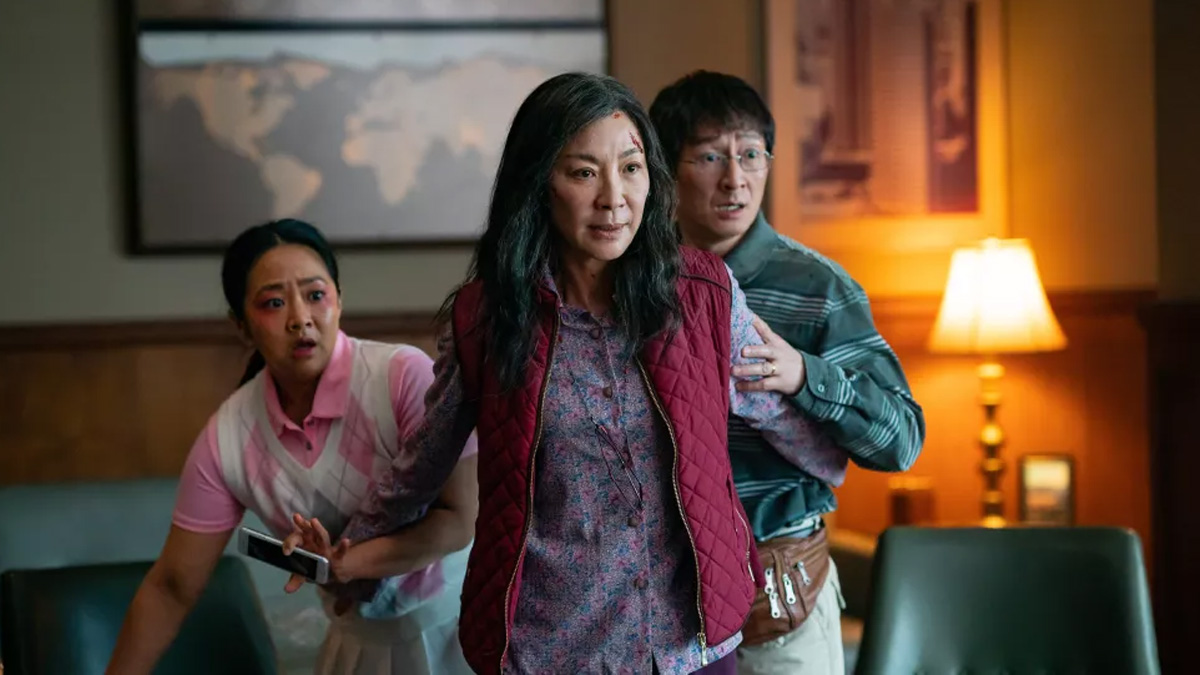 The Plot: Chinese immigrant Evelyn (Michelle Yeoh) lives a quiet life with her husband Waymond (Ke Huy Quan), who unknown to her is planning a divorce. She’s content with her lot running a laundry service which is under the threat of audit from taxwoman Deirdre (Jamie Lee Curtis). Evelyn is also trying to connect to her wayward daughter Joy (Stephanie Hsu). She wonders about the lives she might have lived and promptly gets a chance to do so when another, more loving Waymond from a different universe pops up and believes in her power to save the multiverse from itself. She will have to unite all her selves across the multiverse to find true meaning and save her family…

The Verdict: To borrow the tagline from Amadeus, everything you’ve heard is true. Everything Everywhere All At Once comes spinning like a wild dervish onto these shores in a flurry of overwhelmingly enthusiastic reviews and strong box office from America. It’s one of those definite word-of-mouth films that canny New York-based distributor A24 films specialises in. Edgy, imaginative, thought-provoking and hugely impressive filmmaking in its own unique way – that appears to be their mantra and has sealed their place in the film firmament. The adjectives could go on and on, but it really is that excellent and deserves all the praise coming to it. Marvel should be looking over their shoulder too. Maybe producers Anthony and Joe Russo, who have form with Marvel, could have a word with them. This is the kind of film about the multiverse that Doctor Strange dreams about. While it might be slightly opportunistic for A24 to release it here mere days after the latest Marvel blockbuster, it really should be Marvel bowing down to this masterful little indie with a big cartoon heart bursting out of its chest.

It could only come from the imaginations of Daniels – the collective name for co-writers and co-directors Dan Kwan and Daniel Scheinert. It’s as equally idiosyncratic as their earlier film Swiss Army Man, which featured Daniel Radcliffe as a corpse. It was something of an acquired taste, but an amusingly quirky one at that. Everything Everywhere All At Once is most definitely a step up for them, harnessing their clever sensibilities for alternative storytelling but in a more accessible way this time. At its core, it’s a film about an everyday Chinese family in a slow-motion crisis, as viewed through the eyes of matriarch Evelyn. She’s losing her grip on her husband and daughter, but within this humble woman who fusses about small details is the power to unite the multiverse and her various selves living out different lives in other universes. The possibilities are endless it seems, but this Evelyn matters the most because she’s the most ordinary – and as a beloved uncle once said, with great power comes great responsibility.

Daniels hold true to that level of responsibility by depicting various versions of Evelyn, but all linked in some way to our Evelyn. For example, there’s the movie star Evelyn, a sly nod to leading lady Michelle Yeoh, who didn’t leave for America with Waymond and then runs into him again in a Wong Kar-wai-style moody encounter full of deep regrets. There are a lot more too, including some mad variations of Evelyn and her daughter Joy, who comes to represent the force that Evelyn must confront and defeat to unite the multiverse. It’s all done in a dazzling array of character variations that might prompt a quote from Waymond – ‘I’m still a little bit lost’. No harm though, as there’s so much fun to be had here in having your head melted and then massaged back into some sort of shape by Daniels. Supremely confident in their approach and how to get the audience behind it, it pays off handsomely thanks to an outstanding Yeoh. She anchors the film and is so game in how to portray the various Evelyns in different shades while keeping them essentially the same character. She also kicks some serious butt (literally) in the fight sequences.

The whole cast get behind her too, including an amusing turn from Jamie Lee Curtis letting it all hang out as a dowdy but dogged auditor-of-the-year. It’s also interesting to see former Goonie Ke Huy Quan return to acting with a heartfelt role that has a lot of humour and humanity behind it too. One suspects he tapped into Data for some inspiration. That’s what the film also has in spades – inspiration and a madcap spirit of adventure, with Daniels taking the story wherever it goes. Now this is how you tap into the multiverse of madness correctly and exploit its full potential. There is something inherently crazy and mind-blowing about the multiverse, the idea of other selves living out alternative lives but with some deep-rooted connection to our own. Everything Everywhere All At Once lives up to its title, sending the audience spinning into one multiverse after another, sometimes all at once but always with its eye on the prize. It puzzles the mind, moves the heart and shakes the soul while also being the funniest film of the year, hands-down. Pure brilliance all round, best experienced with a large, enthusiastic cinema audience. You won’t get that on your sofa. Bravo indeed and quite possibly the film of the year already.