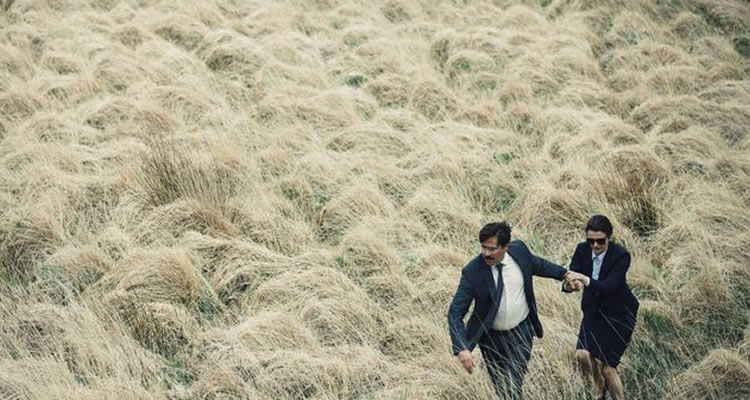 THE LOBSTER (Greece | UK | Ireland | Netherlands | France/TBC/119mins)
Directed by Yorgos Lanthimos. Starring Colin Farrell, John C. Reilly, Ben Wishaw, Olivia Colman, Rachel Weisz
THE PLOT: Recently single David (Colin Farrell) checks into a mysterious hotel in the hope of finding love; the catch being that if he doesn’t find a partner with in 45 days he will be turned into an animal. Choosing a lobster as his animal, Dave sets out to find a woman to spend his life with, spending evenings hunting the Loners to try and up his day quota, and trying to find a woman with whom he has a defining characteristic in common.
THE VERDICT: Another of the directors presenting films at Cannes in the English language for the first time Yorgos Lanthimos’ film is a weird, twisted and surprisingly funny fantasy tale, set in a place that could be anywhere, with characters who really could be anyone.
Colin Farrell seems to embrace the melodrama, the comedy and the deadpan delivery of THE LOBSTER, and ably carries the film on his shoulders. As always, his comic timing is fantastic, and he has a bewilderment about him that suits the character and the frankly strange situation he has found himself in. Olivia Colman plays the domineering and controlling hotel manager, Rachel Weisz turns up as a love interest for Farrell’s character at the worst possible time, but makes the character engaging, but in keeping with the style of the film, rather standoffish and monosyllabic. John C. Reilly and Ben Wishaw play friends to David; Reilly plays this soft, lisping and insipid character well, and the chemistry between him, Ben Wishaw and Colin Farrell is lovely.
Yorgos Lanthimos and Efthymis Filippou’s script feels as though it is a combination of Wes Anderson’s most quirky and inaccessible characters and any one of the recent films set in a (sigh) dystopian future that you care to name. NEVER LET ME GO, perhaps? The dialogue is functional but spattered with laugh out loud funny lines and a fantastic voice over from Weisz. That said, the film is definitely one of two halves; as soon as David decides to leave the hotel and take his chances in a world seemingly hostile to single people, all bets appear to be off. From here, the film feels a little like LORD OF THE FLIES combined with SHAUN OF THE DEAD – apocalypse, no zombies, but still rather funny – but this second half feels entirely disconnected from the start of the film.
Yorgos Lanthimos, as director, creates a world of melodrama and understatement, and uses Farrell and Reilly’s natural comedic instincts to the film’s advantage, keeping the action on screen off-kilter and weird, but still engaging and absurdly funny. Once the location changes however, the pacing of the film truly struggles. Although the action keeps going, it is at a much slower and more sluggish pace, and the audience is never sure where the film is going to end up as it seems to lurch from scene to scene with no seeming reason to do so. As well as this, the melodramatic elements of the film often work against it, the violent outbursts of music often leave the audience giggling rather than rooting for the characters, mainly because we never know what they are truly up against.
In all, THE LOBSTER is truly a film of two halves; the first, in the hotel for the ‘damned’ plays with the conventions of dating and, to a lesser extent, hotels, but once we leave the comfort of the indoors for the forest, things quickly fall apart. Still, it’s great to see Farrell’s comedic instincts on screen, and there is enough here to keep the audience engaged, even if proceedings are a little slow.
RATING: 3/5
Review by Brogen Hayes