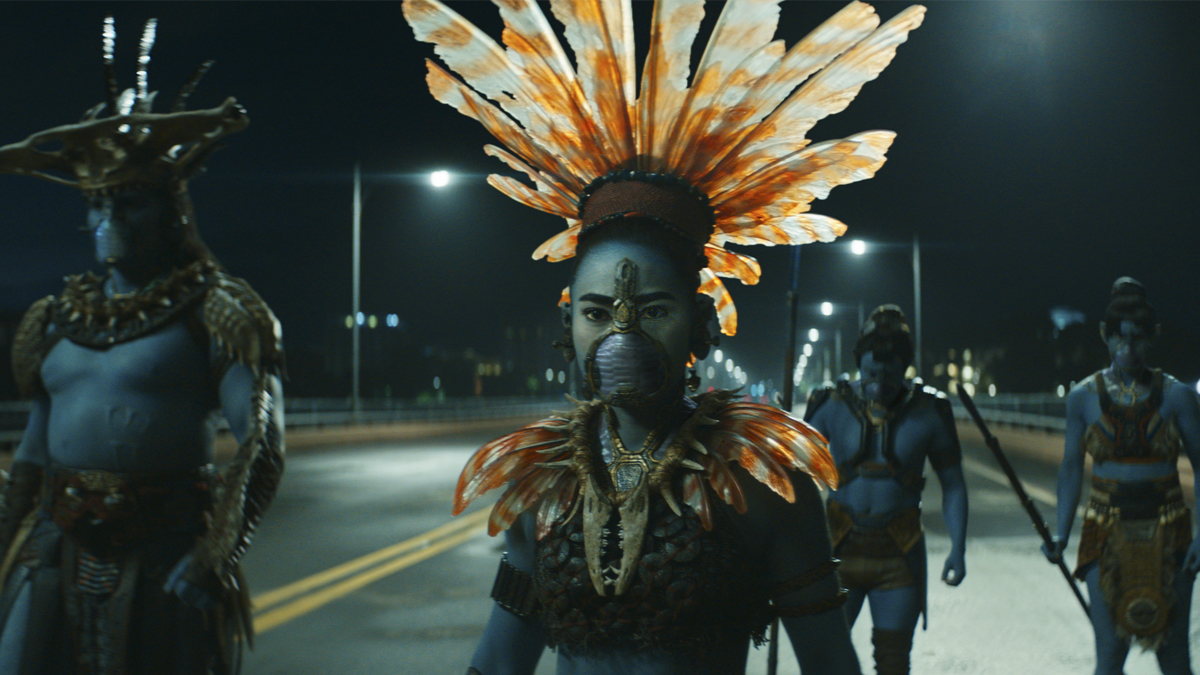 The Plot: The death of the Black Panther, King T’Challa, reverberates throughout Wakanda. Shiri (Letitia Wright) must now step up to the plate and honour her brother’s memory, with the help of their mother Ramonda (Angela Bassett). With Wakanda now revealed to the outer world, a battle for control of vibranium looms ahead. However, it turns out that Wakanda is not the only source of vibranium. Namor (Tenoch Huerta) reveals himself in Wakanda, also from an advanced civilisation which lives under the sea in South America. He proposes an alliance to fight intruders, with the intention of striking first against the outer world. Not an easy sell to the Wakandans…

The Verdict: The death of a lead actor will undoubtedly affect any production. More so with the Marvel family, which is very much a collective unit of talent build up over a long period of time. The fact that Black Panther himself Chadwick Boseman battled through terminal illness on set without telling his Marvel family showed his commitment to his work. His untimely death left a gaping hole, halting production on a sequel. Where to go from here? The answer is stridently forward, in his honour of course. Boseman wouldn’t have wanted it any other way. Black Panther: Wakanda Forever deals with the issue straight up and then respectfully moves on with the story. Not that he leaves the story altogether. T’Challa and Boseman’s presence is felt throughout this vibrant sequel, like a Wakandan spirit watching over it for luck.

Black Panther was very much a gamechanger for Hollywood and the wider film industry, a massive leap forward in screen representation and proof enough that there was an appetite for diverse storytelling. It opened other doors that were previously shut, like the recent box office hit The Woman King. Wakanda Forever very much continues in this vein, progressing the story of the technologically advanced civilisation now dealing with its place in the world. Returning director and co-writer Ryan Coogler along with Joe Robert Cole have pushed representation that bit further in their script for the sequel. In T’Challa’s place, step forward the women who become the driving force and agents of change. Not that they were sidelined in the previous film, but Wakanda Forever gives characters like Shiri, Ramonda, Nakia (Lupita Nyong’o) and the fabulous Okoye (Danai Gurira) more narrative room to breathe and mark out their own territory. They’re joined by Riri (Dominique Thorne), an American scientist caught up in the potential conflict between Wakanda and Namor’s land of Talokan.

It’s not like the excellent female cast are filling in for Boseman. Wright and Bassett in particular are given a lot of acting heavy lifting to do, but do so with ease. It’s more that they’re equally sharing the burden of his absence and that of T’Challa’s, but in the most respectful way possible. There’s a reverence here which is admirable, right down to the mid-credit scene. However, this is still a busy, action-packed film with a lot of plot and running time to get through. It’s time well spent though, building up the two very different civilisations that find themselves at a crossroads in how they deal with the outer world. The latter is a background player here, just waiting in the wings for the moment to strike. But is a potentially destructive conflict necessarily the right way forward for these civilisations, one still hidden and the other not? Coogler teases out this scenario with intriguing results, while delivering on all the action fronts with some standout set pieces involving aquatic and aerial combat that spin off in dizzying directions. Over to you, Avatar: The Way Of Water.

Much like its predecessor, Wakanda Forever is a propulsive action thriller with a deep emotional core that stands to it well. The king is dead, but long lives the king’s spirit as it touches each soul in Wakanda and beyond. This sequel could have gone off in many different directions. After some soul-searching among Coogler and his team they’ve found the path to not only honour their departed friend, but also to move the story forward in the right direction with nary a misstep. Marvel’s last cinematic offering of the year is another superheroic triumph, re-inforcing the Field Of Dreams concept that if you build it, they will come – in their millions. And what an engaging story and diverse world to immerse oneself in once again to thrilling effect.

In short: Long live the king