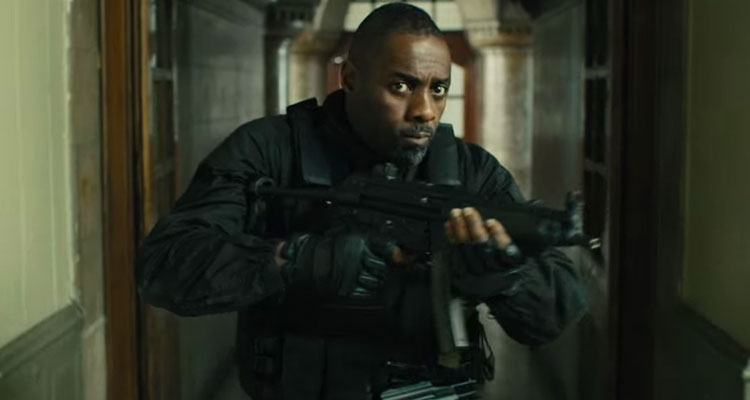 BASTILLE DAY (France | USA/15A/92mins)
Directed by Gavin Hood. Starring Idris Elba, Charlotte LeBon, Richard Madden, Kelly Reilly, Anatol Yusef.
THE PLOT: Michael Mason (Richard Madden) finds himself under suspicion of planting a bomb in Paris, but when he proves to CIA agent Sean Briar (Elba), that he is merely a talented pickpocket, the two team up to stop more attacks and uncover the motivation behind chaos being caused in Paris on the run up to their national holiday, Bastille Day.
THE VERDICT: There have been rumours for a long time now about Idris Elba taking over the role of James Bond in the long running film franchise, and although it now seems that the rumours are nothing more than that, ‘Bastille Day’ proves that the actor is more than capable of taking on an action role, even if the rest of the film is not filled with exciting performances or a script that makes sense.
As mentioned Idris Elba is strong in the role of CIA agent Sean Briar, he easily takes on the action sequences and makes them thrilling, while also creating an imposing and threatening character. However, Elba is never truly given a chance to create a fully rounded character, and although we are given plenty of back story to the character, this is more used to set up the rest of the film than form a full character. The same goes for Richard Madden as Michael Mason; Madden never truly gets a chance to make the character anything other than a charming pickpocket, and we never get a real sense of the character. That said, it seems that Charlotte Le Bon as Zoe gets the rawest deal of all; the character makes choices throughout the film that son’t make much sense and are not in keeping with the person we see on the screen. As well as this, Zoe often changes her mind and her attitude, quickly throwing in with whomever seems the strongest at the time. Kelly Reilly, José Garcia and Anatol Yusef suffer similarly, being little more than vehicles for exposition.
Andrew Baldwin’s screenplay tries to make ‘Bastille Day’ an engaging thriller that doesn’t rely on the usual tropes of terrorism, but by the time the villains’ true motivations are revealed, the film is littered with misdirects and odd choices, that does not make this revelation so much of a twist than an uninteresting swerve that again, makes little sense. In fact, the set up for the film works fairly well, but motivations and revelations are weak and unengaging throughout.
As director, James Wadkins does well with the action sequences, making them fast paced, breathless and thrilling,. But the same does not apply for the more slowly paced, dialogue heavy scenes. The twists are obvious from the start, and although Idris Elba’s performance is strong, the same cannot be said for the rest of the cast, who struggle throughout the film
In all, ‘Bastille Day’ tries to be an engaging thriller that quickly turns expectations on their heads, but the cast struggles with a scattered script, and although the action scenes are strong, the resolution of the film feels as though it would not be out of place in a 1970s sitcom.
RATING: 3/5
Review by Brogen Hayes