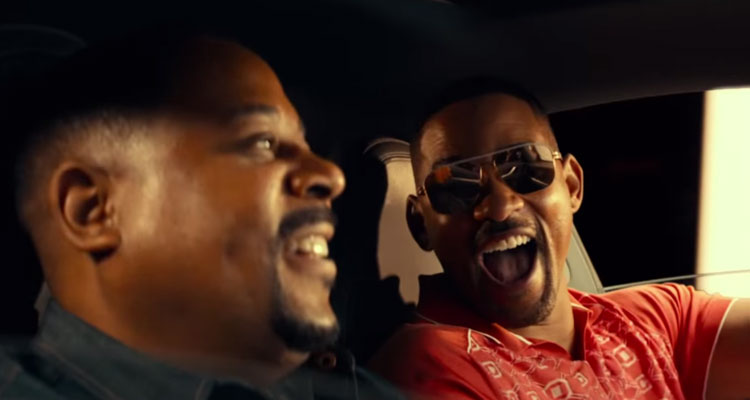 In short: Better than expected

The Plot: Miami cops Mike (Will Smith) and Marcus (Martin Lawrence) are now middle-aged and facing a crossroads in their lives. The bad boys are now trying to be good men – or at least family man Marcus is. Some hot trouble is coming their way though in the form of Mexican ‘witch’ Isabel (Kate Del Castillo) and her son Armando (Jacob Scipio). The former wife of a drug cartel runner, Isabel is gunning for revenge against Mike. She plans to unleash Armando’s deadly talents, starting with an attempt on Mike’s life. Marcus reluctantly comes out of (temporary) retirement to help his buddy. Together with a crack team of police officers, the duo set out to stir things up…

The Verdict: What’s this? A breezy summer buddy action film opening in the chilly hinterland of January? Bad Boys For Life being released at this time of the year might tip audiences off to the fact that it’s not up to much. Only Awards Season films and a studio’s post-Christmas effluent end up in cinemas at this of the year. It’s mildly surprising then to find that this belated third film in the franchise that began way back a quarter century ago is actually a reasonably good night at the movies. It shouldn’t really work. With long gaps between each film, this buddy cop franchise was in danger of losing its momentum and relevance. Not to mention the fact that Martin Lawrence has been rather quiet of late – has he still got that star power? With Michael Bay not involved this time (though he does have a cameo), this could have been a disaster. What went right?

It’s partly down to 1990s nostalgia for a franchise that has managed to keep going despite the world changing around it. Bad Boys For Life may be set in the present day, but it’s still got that rather simplistic 1990s feel where the bad boys are all that stand between Miami and the bad guys. Or rather the bad woman and her vengeance-seeking son, all fiery determination and stony stares. It’s also down to the charisma and star power of Smith and Lawrence, who continue their wisecracking / bickering double act as if they just dusted down their prop badges and guns and got back to business as usual. There’s a welcome acknowledgement of their progressing years, while reinforcing the idea of family – something that has more than a touch of Fast & Furious to it.

At one point, Marcus refers to plot developments as being like a Mexican telenovela. He’s not far wrong. The script, which has three credited writers including Narc director Joe Carnahan, leans more towards the soapy, slightly sentimental side. This works both for and against the film. It deepens the backstory of one character and provides a new narrative angle on that character when it looked like there was nothing more to say. However, it also cheapens and almost undermines the impact of the aggressive, guns-blazing early scenes which give the film its edge. The jokes do occasionally hit (e.g. Marcus’ witch gags) while others miss by a mile (Marcus again). There’s also some lazily obvious writing involving a buff tech guy on the team who doesn’t get involved in the fray. No surprises then on where he ends up.

The film is directed by Adil El Arbi and Bilall Fallah, but they’re no Michael Bay. His trademark Bayhem and destructive magic hour car chases are absent here, leaving the two new directors to offer competently-directed but unspectacular action sequences instead. It’s fine for what it is, but had Bay been on producing duties here then he might have injected a bit more oomph. He’s reportedly returning to, yes, direct Bad Boys 4. Though, the producers of the new film may have jumped the gun on the title and missed out on calling the next one Bad Boys 4 Life. Let’s hope that it arrives soon and not when Mike and Marcus are pensioners called out of retirement for that old chestnut, one last job. For now, Bad Boys For Life is better than expected and does what it says on the bullet-riddled tin.