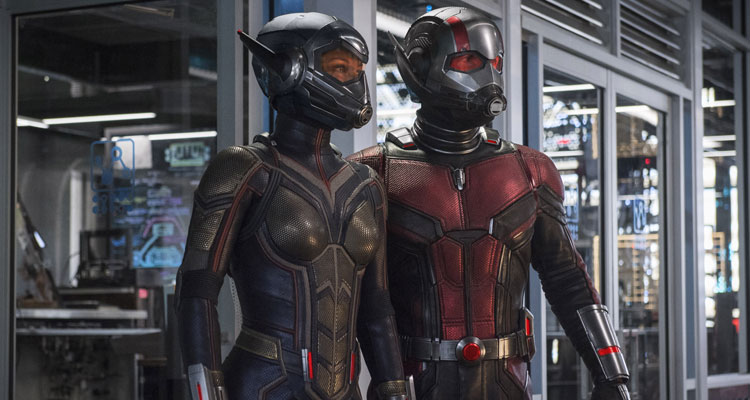 The Plot: Miniature hero Ant-Man AKA Scott (Paul Rudd) is under house arrest. He’s using it for some quality time with his daughter. Having previously delved into the mysterious Quantum Realm he experiences visions of Janet (Michelle Pfeiffer), the long-lost mother of Hope AKA The Wasp (Evangeline Lilly) and the wife of Hank (Michael Douglas). Hank has developed a tunnel into the Quantum Realm to find Janet, so he ropes in Scott to find her. They’re not the only ones. Tortured, phase-shifting Ghost (Hannah John-Kamen) is on their trail along with her mentor Bill (Laurence Fishburne). She needs to find a cure for her debilitating condition in the Quantum Realm. So begins a breakneck chase to see who gets there first…

The Verdict: Marvel’s third and final barnstorming film of the year (they’re really spoiling us) is the flipside of the kinetic Black Panther and the brooding, apocalyptic Avengers: Infinity War. The latter veered towards DC-style darkness, so here’s the flipside in Ant-Man And The Wasp. Much like the first Ant-Man, this welcome follow-up is a sweet confection. Light on its feet, inventive in its use of scale and constantly moving, this sequel is all about the importance of families and what our thimble-sized heroes will do to protect and save them.

As promised by the first film’s end-credits teaser, Ant-Man And The Wasp expands on the backstory involving the original Ant-Man and The Wasp – that of Hank and Janet. If there’s a beating heart here, it’s in this particular plot thread. It’s the film strongest asset, bringing together two old pros, Douglas and Pfeiffer, for a daring mission into the heart of the unknown. Flashbacks show the two together early on, through the magic of CGI de-aging. The technology is so advanced now compared to, say, X-Men: The Last Stand, that Marvel should consider taking up Douglas’ offer to do a prequel with him being digitally de-aged. No need for re-casting here.

Around this involving story is built the more comedic element of Scott and his burgeoning romance with Hope, along with bonding time with his smart cookie daughter. Again, the emphasis on family. It’s a smart move on the part of returning director Peyton Reed, given how important families are right now in the Marvel Cinematic Universe. Everyone needs to stick together after the world-shaking events of Avengers: Infinity War (more of which in the two end-credit teasers). Ant-Man And The Wasp leads up to this, but it’s very much a self-contained adventure with the emphasis on FUN.

There’s plenty of fun to be had here, from frenetic car chases through the hilly streets of San Francisco to the comedy cops, Michael Pena’s sidekick and the amusing use of scaled objects (salt shakers, Hello Kitty Pez dispensers). There’s also an intriguing antagonist in the formless shape of Ghost, with Hannah John-Kamen building on the strong impression she made in Ready Player One earlier this year. The less said about Walton Goggins’ two-dimensional rent-a-villain the better – he’s wasted here. Reed keeps the film moving at a busy pace, maybe a little too fast at times. A little more in the thought-process here wouldn’t have gone amiss. That said though, Marvel fans and cinemagoers will not be disappointed. Ant-Man And The Wasp is a blast of bubblegum fun. Possibly strawberry flavoured.