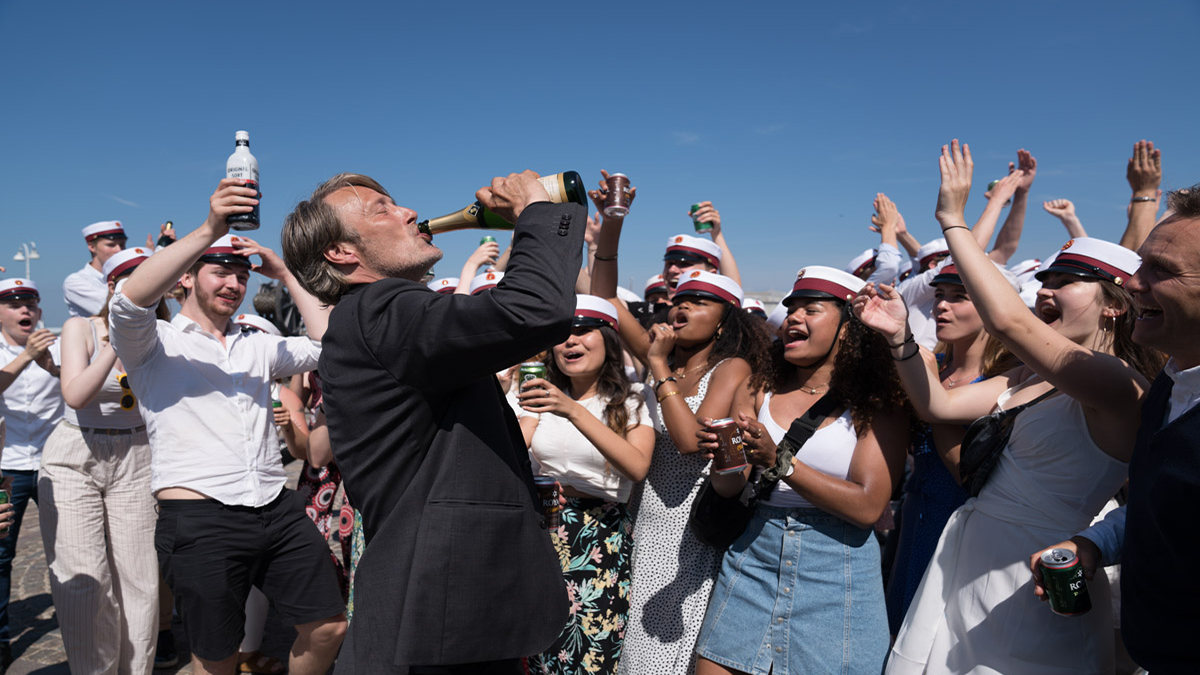 The Plot: History teacher Martin (Mads Mikkelsen) has found himself in the midst of a mid-life crisis. His students are not reacting to his classes in the way that he hoped. Their opinionated parents are not too sympathetic either. His long-term marriage to Anika (Maria Bonnevie) has hit a bump in the road, with familiarity leading to the onset of staleness in their relationship. He needs something to pick up his spirits – or rather he needs spirits. Fond of alcohol, his friends and fellow teachers Tommy (Thomas Bo Larsen), Peter (Lars Ranthe) and Nikolaj (Magnus Millang) attempt to prove a theory that states the human body is lacking 0.05 blood alcohol content by keeping their alcohol intake at the correct level. Having set some ground rules, their lives begin to change dramatically…

The Verdict: From the land of the best lager in the world (probably) comes new drama Another Round. It sees former Dogme 95 advocate / director Thomas Vinterberg re-united with Mads Mikkelsen, who fronted his memorably insightful feature The Hunt back in 2012. There’s something similar in the bottle here. This is a lighter but at times still sobering account of a teacher who finds himself veering too closely to the wrong end of familial and public opinion. The basic premise of Vinterberg’s script with Tobias Lindholm is that of four drinking buddies who maintain a consistent blood alcohol content during the daytime, a pick-me-up to get them through their school days dealing with disinterested kids. Drinking on the job at various points in the day doesn’t seem to bother them, particularly when the results are there to see fairly quickly.

Martin finds a spring in his step, is more engaging with his students and makes a point about not judging characters from history too quickly because they were flawed. His wife takes a newfound interest in him, bringing back the Martin that she thought had been lost to mid-life ennui. When Martin and his drinking buddies decide to push their experiment further, the wheels start to come off and the demon drink rears its ugly head. Every action has consequences, particularly when dealing with a beast that can get out of control too easily. This thoughtfully-made drama about the positive and negative influences of alcohol isn’t quite what you expect. Coming from a Scandinavian like Vinterberg, one would expect something mostly dour and serious to the point of exhaustion. Not so. There’s a consistent maturity in the writing and direction that elevates this story into a tragi-comedy with an easygoing and amiable flair. A tricky balance, but he pulls it off with flair.

The current hot potato of toxic masculinity is not something that Vinterberg is keen on exploring here. He’s more interested in how varying intakes of alcohol alter behaviour, thereby affecting friendships and relationships in varying degrees. Vinterberg demonstrates a level of self-control that his characters are otherwise struggling with in their own lives. Life is not something that just passes by to them. Life is to be lived, but in moderation of course. He captures the energetic highs and crashing lows of alcohol abuse, without it becoming an overbearing message movie. There is a cautionary tale here, but it’s done so delicately and subtly that audiences will raise a glass to the filmmakers and the excellent cast of actors for delivering something so entertaining. Mikkelsen is terrific throughout, bringing the humour and gravity of his character to the screen with precision acting that hits every beat. Vinterberg also lets him bust some serious dance moves – worth the price of admission alone. Already something of a hit in its home country, Another Round is a sparkling and tasty tipple that responsibly engages both the senses and the mind. 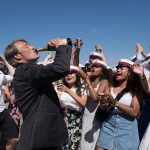 In short: A sparkling tipple