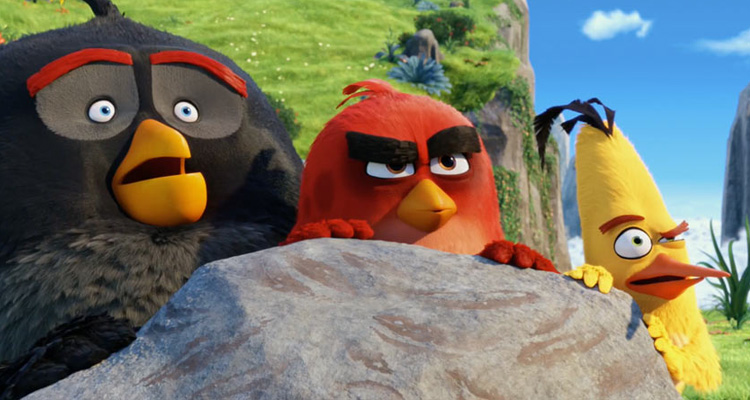 THE ANGRY BIRDS MOVIE (USA/PG/97mins)
Directed by Clay Kaytis, Fergal Reilly. Starring the voices of Jason Sudeikis, Josh Gad, Peter Dinklage, Kate McKinnon, Sean Penn, Bill Hader, Maya Rudolph, Danny McBride.
THE PLOT: That Red (Sudeikis) is having trouble with his anger isn’t all that surprising, given the chirpy-chirpy, beep-beep world that he lives in. Sometimes, that raging temper is only there because you’re surrounding by major assholes, something that lands Red on an anger management course. Whatever progress Red may have reluctantly been making at the course is soon squashed though when two pigs park their boat on top of his beachfront home. And those two pigs are soon four. And then, 104. As the town falls under the all-singing, all-dancing pigs’ charms, Red is convinced the little oinks are up to something. And he’s right…
THE VERDICT: This year’s ‘Lego Movie’, it’s a very pleasant surprise indeed to discover that the ‘Angry Birds Movie’ is a hoot from beginning to end. Jason Sudeikis makes for a perfect Chris Pratt, as the hot-tempered Chicken Little whose BS meter is set to 11. Just like so many great comic creations, from W.C. Fields to Larry David.
The jokes come thick and fast, thanks to a tight and bouncy script from ‘Simpsons’ veteran Jon Vitti, whilst directors Clay Katis (a Disney refugee) and Fergal Reilly (an Irishman, begorrah!) clearly know their pacing.
There’s so much to love about this movie, not least the solid cast, with everyone from Gad and Dinklage to Hader and, eh, Penn clearly having the time of their lives.
It could have been so easily ‘Minions’ so-so or ‘Penguins of Madagascar’ disappointing, but ‘Angry Birds’ soars high, firing on all cylinders and all fronts. Which, now that I look back over those sentences, is all very generic poster-quote stuff, so, I’d best just sign off by saying, hey, I feckin’ loved it.
RATING: 4/5
Review by Paul Byrne