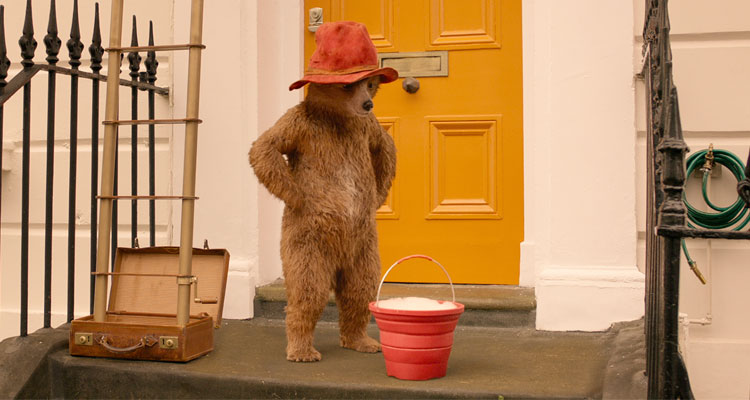 10 things you need to know about Paddington 2

Paddington 2, the sequel to the hugely successful 2014 movie opens in Irish cinemas on November 10th. Paul King returns to direct the movie which stars Hugh Bonneville, Sally Hawkins, Jim Broadbent, Julie Walters, Brendan Gleeson, Hugh Grant and the voice of Ben Wishaw. How much do you know about the polite bear from darkest Peru? Check out our furry facts below…

Jeremy Clarkson
The first child to have a Paddington Bear toy was TOP GEAR presenter Jeremy Clarkson. Clarkson’s parents ran a small design business called Gabrielle Designs. In 1972, their mother made a prototype for the first Paddington Bear stuffed toy and gave it to Jeremy, then 12 for Christmas. These early bears were all handmade in the Doncaster factory, and are now considered collectors’ items.

Cultural Icon
Paddington Bear has become a cultural icon over the years; there is a permanent statue dedicated to him in London’s Paddington Station, and when the two sides of the Channel Tunnel were linked up in 1994, the English workers passed a Paddington toy through the gap to their French colleagues.

50 Paddington Statues
Paddington has had over 50 statues made of him. Celebrities including Stephen Fry, Julie Walters, Emma Watson, David Beckham & Liam Gallagher have designed  life-size statues of the bear. The most famous statue is permanently on display in London’s Paddington station.

BONJOUR
A Paddington Bear soft toy was chosen by British tunnellers as the first item to pass through to their French counterparts when the two sides of the Channel Tunnel were linked in 1994.

Love it or Hate it
In 2007 Paddington decided to try something different in his sandwiches, and became the star of an ad for Marmite. Although the ad ends in disaster – as many of Paddington’s escapades do – it has been viewed over 95,000 times on YouTube so presumably, was a huge success for Marmite.

Voicing an Icon
Colin Firth initially signed on to be the voice of the title character in PADDINGTON, but was replaced by Ben Whishaw. Whishaw, of course, played the rebooted version of Q in SKYFALL, and has signed on for a role in the as yet untitled biopic of Queen frontman, Freddie Mercury.

Give Good Face
When it came to Paddington’s facial animation a lot was taken from Ben Whishaw, who voices the bear. “There’s so much that can be conveyed by the face, every expression or small eyeline adjustment can give such a change to how a character feels,” said  ‘Paddington 2’ animator Liam Russell. “We used Ben ‘s reference a lot for this very thing. There’s so much more to animating dialogue than just the voice, and being able to include Ben ‘s specific expressions into our animation really helped to bring Paddington to life.”

Please Look After This Bear
Paddington author Michael Bond died on the last day of filming ‘Paddington 2’. Aged 91, his passing  was met with a widespread outpouring of love and grief on social media. Much of it circled around a gif of Bond’s cameo in the first movie, where he raises a glass of wine to Paddington as the wide-eyed bear swoops through London in the back of a taxi. At the time, it was a lovely touch, a nod from creator to his creation. Now, it seems even more incredibly poignant.

When Can I See It?
PADDINGTON 2 is at Irish cinemas from November 10th