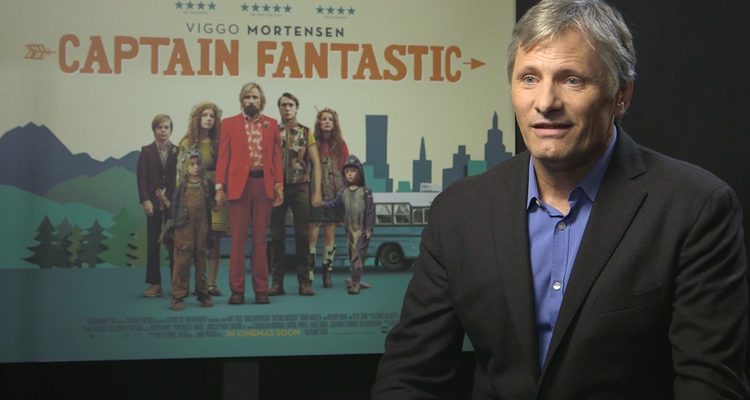 ‘Lord Of The Rings’ actor Viggo Moretensen was in Dublin last month for a special screening of his new movie ‘Captain Fantastic’, where he plays Ben a father determined to protect his children from the technology obsessed world by living in the wilderness. However, living in the forest can’t last forever, when their mother is taken ill, Ben takes the kids on a road trip across a country all too familiar to him but alien to them.

Welcome to Dublin, and congratulations on ‘Captain Fantastic’, it’s a beautiful film. What attracted you to the project?
Great script; one of the best stories I had read in a long time, and that’s the first thing I always look at. Is it a good story? Is it a movie that I’d want to go see? This film was and it was one of the best ones that I had read in a long time, so I felt fortunate that [director] Matt Ross was interested in me playing this character. I am very happy. I am very proud of the movie; I think it’s a good movie.

You had some input into the film?
Yeah, but no more than anyone else. One of Matt Ross’s strong points is that he was open to anybody’s opinion, suggestions. He might not use all of the ideas but he didn’t seem to ever feel threatened by people’s suggestions, and I think that’s a strong point of any director. The script I read is basically what you see on screen, so it’s not like much was changed, but he was open to a degree of improvisation and chance. When you are working with six kids – especially very young ones – you are gonna get surprises, and he was good at using what he got from them.

The film is about the fine line between coddling children and being too honest with them. Do you feel there is a balance to be found in this?
Yeah. That’s one of the strengths of the story, that the role I play, the father, Ben is forced to recognise at a certain point that he is out of balance, that maybe he has gone too far in certain areas. Honesty is great in principle, being really honest with your kids about everything, and having no subject be off the table – whether it’s death, sex or anything else – I think that’s good, I think that’s positive. It’s a question of degrees, choice of words, [laughs] tone… There are moments where he is brutally honest in this story, and sometimes its very funny, but right after you have laughed at that moment you think maybe that’s a bit much, or maybe its even a bit dangerous or harmful psychologically, and some things – like the rock climbing – you wonder if it’s not physically ill-advised [laughs]. There are a lot of things, morally, that they do and say that you wonder about. In general I think the foundation is good, they just need to find a new balance [laughs]. It’s a bit extreme sometimes.

The film also has the theme of finding where home is, and where you belong. Do you find that is something you have found in your own life?
I think it’s a constant struggle. I think if it’s in a relationship with somebody, or first and foremost, the relationship with yourself, how you feel in the world and around other people, it’s not something you arrive at and say “Well OK, I’m at peace now, and I’m in a good mood” or “I am having a good day” or “I’m getting the most out of life, I’m paying attention to what’s happening around me”. You have moments like that, hopefully, but then the next moment is probably not as good as that, and it’s a process. There is no such thing as a perfect Dad or a perfect relationship or democracy, you just have to work at it. This story, in part, talks about that; it speaks to the benefit of communicating, especially communicating with and listening to opinions that are different than your own.

What do you hope audiences take from the film?
That! That it’s important to listen, and if you are a parent it’s really important to listen to your kids and to be as present as you can be. Everybody’s busy, everybody has their own interests. You know, as a parent, or you know in your relationship, or you’ll find out soon enough if you are not present… I think any movie that makes the audience feel that, at times, that everything they are doing is wrong, there is something to be said for that! [laughs]