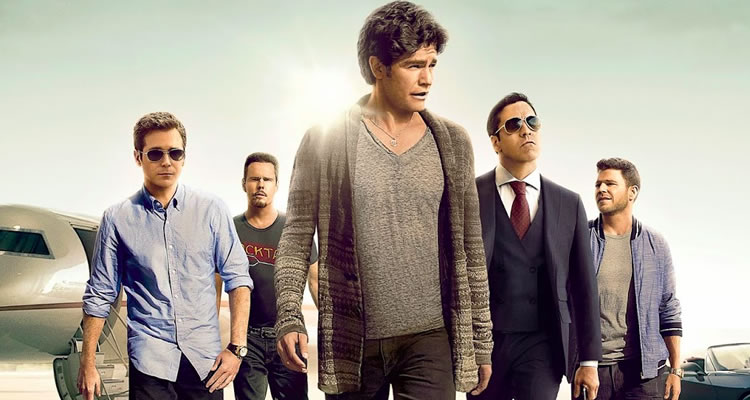 Perhaps the only thing better than a big-screen romance is a big-screen bromance! Watching two guys become (or remain) besties over the course of a movie is always guaranteed to put a big smile on the audience’s faces, and on June 19th we’ll get to see it again, as the ‘Entourage’ movie arrives in a tsunami of platonic man-love. While we wait for Vince, Eric, Turtle, Johnny Drama and, yes, even Ari Gold to all hug it out, why not revisit some of the best cinematic bromances of our time?

First things first, forget the sequel. And while we’re at it, forget the prequel too. While Harry and Lloyd’s love may have survived them, we won’t. Let’s just focus on the original, an absolute classic modern comedy, we see Jim Carrey and Jeff Daniels as BFFs going through thick and thin (emphasis on thick!), getting caught up in a plot involving kidnapping, hired goons and truck stop bathrooms. It’s always a joy trying to figure out how exactly these lads have managed to stay alive for as long as they have, as in the 90 minutes we spend with them, they managed to crash a car, fall off an airport jetway, set themselves on fire, get their tongue stuck to a patch of ice, catch explosive diarrhoea, get shot at A LOT… the list goes on and on and on…

As Jonah Hill and Michael Cera attempt to buy a load of booze to impress the girls at their last high-school party before they head off to college, we’ve also got third wheel Fogell (aka McLovin’) partying with two of the coolest and most irresponsible cops in cinema history. Very few movies have managed to properly capture the exact feeling of what it’s like to potentially have to break up with your best friend, but Superbad does it spectacularly, all while making it properly hilarious throughout.

Bradley Cooper, Ed Helms and Justin Bartha are three best friends heading off on Bartha’s bachelor party in Vegas, and are forced to take Zack Galifianakis along with them. One particular raucous night later, and Bartha is nowhere to be found, and the three lads have no memory of what happened the night before. A murder mystery without the murder, but with lots of added tigers and Tyson, The Hangover is the idea of “The Fear”, manifested and made real and turned into a movie. It also simultaneously managed to make Vegas seem very seductive and entirely horrifying all at once. Once again, sequels exist and should be avoided.

Riggs (Mel Gibson) and Murtagh (Danny Glover) pretty much hate each other when the first movie starts, primarily due to Riggs being borderline psychotic and Murtagh being too old for this shizz. Despite this rocky start, they end up being besties and help each other get through three declining-in-quality sequels, evil South Africans, demolished buildings and Joe Pesci’s annoyingly fast talking realtor. Even though the lads are 59 and 69 years old respectively, so almost definitely too old for this shizz by now, we’d still kinda love to see them make a comeback for a Lethal Weapon 5, maybe help pass the baton on to the next generation of mismatched partners!

I LOVE YOU, MAN

We couldn’t really go through this list without ending it on the cinematic bromance incarnate that is I Love You, Man. Poor Paul Rudd doesn’t have any friends to be his best man at his upcoming wedding, so he actively tries to find some. A few dodgy man-dates later, and he ends up hanging out with Jason Segel’s loose-living legend. But with their bromance quickly cementing, it begins to put a strain on Rudd’s relationship with his future-wife. Probably the closest there’s ever been to an out-and-out brom-com, the only problem we had this film is that we’re somehow meant to believe that Paul Rudd can’t make any friends? We’ll be your BFF, Paul!