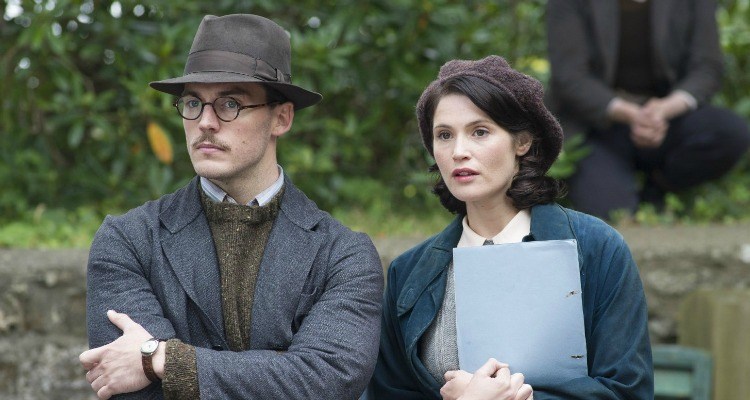 THEIR FINEST (UK/12A/117mins)
Directed by Lone Scherfig. Starring Gemma Arterton, Sam Clafin, Bill Nighy, Rachel Stirling, Jeremy Irons.
THE PLOT: During World War II, a British film company sets out to make an “authentic and uplifting” film about the evacuation of Dunkirk. Screenwriter Catrin Cole (Gemma Arterton) joins the crew to bring a female perspective to the story of twins Lily (Lily Knight) and Rose (Francesca Knight) Starling, who sailed a small boat to France to rescue Allied troops, and finds herself facing some truths of her own.
THE VERDICT: Based on the novel ‘Their Finest Hour and a Half’ by Lissa Evans, Their Finest follows the great traditions of films about making films, such as’ Singin’ in the Rain’, ‘Shadow of the Vampire’ and ‘Hail Caesar!’, and has fun with the idea that this crew are struggling to uplift the entire country while going through their own struggles at the same time.
Gemma Arterton leads the cast as Caterin Cole and although she struggles with the Welsh accent from time to time, Arterton is a charming lead, a woman who stands up for herself although she is too innocent at times. Bill Nighy plays ageing actor Ambrose Hilliard who has yet to come to terms with the fact that his best roles may be behind him. Nighy brings most of the comedy and light heartedness to the story, and obviously has fun with the character and his delusions. Sam Clafin plays the gruff Buckley; a screenwriter who has a heart of gold buried under his cool exterior and Rachel Stirling has fun with the butch, brash and no-nonsense Phyl Moore. The rest of the cast features Jeremy Irons, Eddie Marsan, Jack Huston, Helen McCrory, PauL Ritter and Richard E. Grant.
Gaby Chiappe’s screenplay has fun with the film about movies element of the story, exploring the business of show business and how women were allowed to slot into this world during WWII. As well as this, Their Finest is a love story between two unlikely partners, which has a lot of charm and charisma; making the audience root for an unusual love in unusual times. There is plenty of comedy to keep the film light, but a great balance with the darker moments that make the film emotionally deep and memorable. There are times when the script is a little flabby, with scenes seemingly inserted because they were present in the book, but do little to keep the film on track. As well as this, a third act tragedy is not only shocking, but feels as though it comes out of nowhere.
As director Lone Scherfig, whose previous films include ‘The Riot Club’ and ‘An Education’, keeps the film moving at a good speed, and obviously revels in the fact that ‘Their Finest’ takes place against the backdrop of war, but not actually as part of it, even though conflict and death infuse every scene in the film. There are some wonderful visual moments – such as mannequins lying in the road after a bomb hits London – but a tighter hand could have not only made sure the film was edited well, but given it the extra push it needed to go from good to wonderful.
In all, there is a lot to love in ‘Their Finest’; most of the cast are on wonderful form, especially Nighy, McCrory and Stirling, and there is a great balance between comedy and tragedy throughout the film. There are times when ‘Their Finest’ feels a little flabby, and a tighter edit would have benefitted the film greatly.
RATING: 4/5
Review by Brogen Hayes