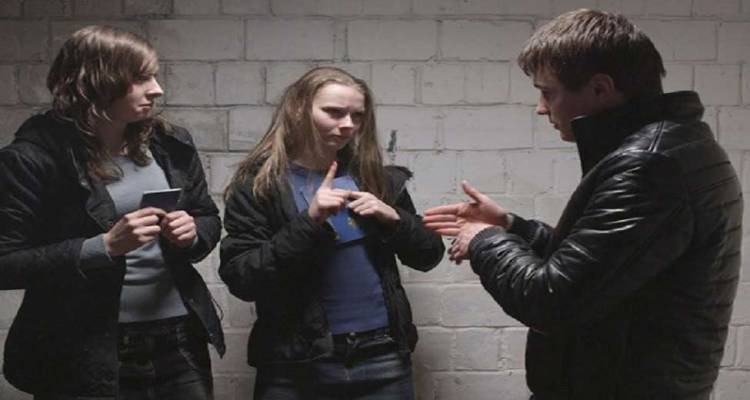 THE TRIBE (Ukraine/The Netherlands/Club/132mins)
Directed by Miroslav Slaboshpitsky. Starring Grigoriy Fesenko, Yana Novikova, Rosa Babiy, Alexander Dsiadevich, Yaroslav Biletskly, Ivan Tishko, Alexander Oadchiy, Alexander Sidelnikov, Alexander Panivan.
THE PLOT: It’s Kiev, present day, and Sergey (Fesenko) quickly becomes a member of a student gang when he arrives at a boarding school for deaf kids. Leader of the gang is the woodwork teacher, who orchestratest the petty theft, prostitution, and whatever else will bring in some money. Sergey takes a leap up the ranks when one of the gang’s pimps is killed in an accident, taking over the deceased’s prostitutes – including Anna (Novikova), whom Sergey soon falls in love with. Despite the fact that she’s dating someone else, the two begin an affair, with Sergey determined that the two of them will break free and run away together. But, it may not be so easy…
THE VERDICT: A daring debut from young Ukranian filmmaker Miroslav Slaboshpitsky, THE TRIBE has a main cast who only speak in Ukranian sign language, and yet there are no subtitles, whilst the lenght of the single-shot takes here would have even David Lean tapping his watch. Right from the start, you know you’re watching art here. Thankfully, The Tribe also boasts a fine kick-ass script. Then again, it would have to, right?
Not that The Tribe is an easy watch. There’s an air of Haneke here, of Kubrick at his most clinical, with the masterful set pieces sometimes merely adding to the sense of voyeurism and even culpability, as the brutal beatings and sexual bullying unfold in the best possible taste, and light.
RATING: 4/5
Review by Paul Byrne