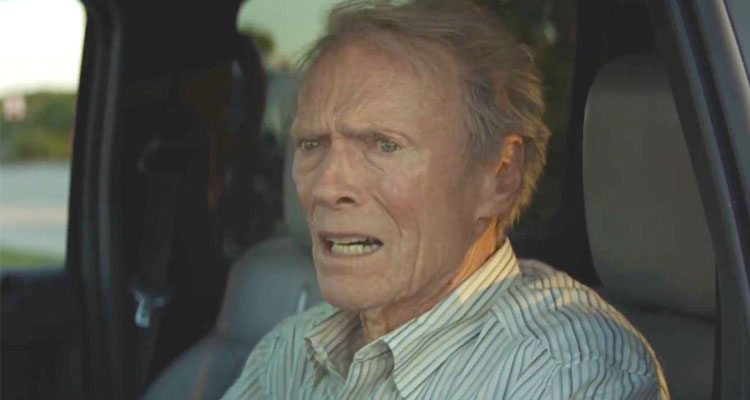 The Plot: 90-year-old horticulturist and Korean War veteran Earl (Clint Eastwood) was never one for being reliable. Too absorbed in his work and his interests, he neglected his family and missed his daughter’s wedding. One day, he receives an offer to act as a delivery driver for a group of shady Mexicans. He’s told not to ask questions about what he’s transporting, so he drives across several states and makes his delivery. He soon becomes a regular driver and uses the money to improve his grand-daughter’s education and his community. He’s not stupid though. He knows that he’s working for a Mexican drug cartel, fronted by Laton (Andy Garcia). On Earl’s tail is DEA Agent Bates (Bradley Cooper), who is under pressure of his own to make a big seizure. As the net closes, the risk to Earl’s life increases…

The Verdict: It was supposed to have been Gran Torino. Then it became Trouble With The Curve. Clint Eastwood had intended to hang up his spurs and retire from screen acting, but not of course directing. However, the 88-year-old screen legend has a knack for bouncing back and surprising us. Having famously waited 20 years to play aging cowboy Bill Munny in Unforgiven, he continues that cycle by portraying another lived-in character in his new film The Mule. It’s inspired by a real-life story, as documented in a New York Times Magazine article about a 90-year-old mule who worked for the Sinaloa Cartel. The key word here is ‘inspired’, as this allows Eastwood and screenwriter Nick Schenk to create their own version of this story and thereby play into Eastwood’s trademark scowl and beady eyes.

This is very much an Eastwood joint, strong on character and incident with liberal dollops of sentimentality. That’s both a blessing and a curse. It’s a blessing in the sense that Eastwood still has that twinkle in his eye, enjoying his role as an old-timer in over his head but embracing his new-found fame, fortune and, er, attention from the ladies. Later in the film, there’s a mildly tense game of cat-and-mouse as Earl and Agent Bates trade words of wisdom over a coffee. Not quite that famous scene from Heat, but it works well. Having previously worked together on American Sniper, Eastwood and Cooper have a shorthand that neatly punctuates those brief scenes together. The film is at it strongest when Earl is on the road being pursued by Agent Bates, as the latter follows the breadcrumbs.

The film’s weaker elements crowbar themselves in along the way, primarily the sentimental family stuff which is passable but slows down the plot unnecessarily. While it’s earnestly done, it comes across as a predictable character arc about making amends for lost time. Likewise with Earl’s cartel  handler, who incredibly defrosts from a surly bad guy to a talkative buddy in the space of just a few scenes. Despite the pumped-up trailer, The Mule is less of a thriller and more of a dramatic character piece about an ordinary man caught up in an extraordinary situation. Despite some misgivings about its wobbly direction, The Mule stubbornly refuses to not touch this reviewer’s heart. It’s light, touching and occasionally tense. It’s not classic Eastwood for sure, but it’s a darn sight better than the muddled, fumbled The 15:17 To Paris. If this is his acting swansong, then it’s an acceptable one. Then again, the old cowboy might come back for one more tequila.