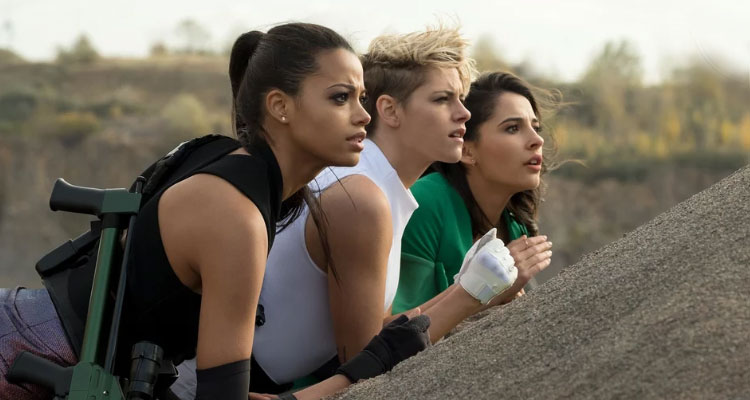 The Lowdown on the new CHARLIES ANGELS movie

ABOUT THE MOVIE
Charlie’s Angels have always provided security and investigative skills to private clients, and now the Townsend Agency has expanded internationally, with the smartest, most fearless women all over the globe – multiple teams of Angels guided by multiple Bosleys taking on the toughest jobs across the world.

CONTINUATION
This new version of Charlies Angel’s from director Elizabeth Banks isn’t necessarily a reboot or a remake of the beloved franchise, but rather a “continuation” that incorporates events of the original 1970s TV series and the McG-directed 2000s films.

ANGEL INTRODUCTIONS
Twilight’ actress Kristen Stewart leads a trio of self-described “lady spies,” which also includes ‘Aladdin’ star Naomi Scott and newcomer Ella Balinska. Along the way, the women must use an array of gadgets and don multiple disguises  including a dazzling repertoire of wigs & equestrian attire.

100 EPISODES
Charlie’s Angels originally began on TV as an American crime drama back in 1976, producing 5 seasons and 110 episodes.

THE LOVE BOAT
Long before Marvel popularised cross-overs, Charlie’s Angels crossed over with another popular 70’s TV show called ‘The Love Boat’. In the episode titled ‘Love Boat Angels’ the girls joined the cruise which had characters from both shows on board.

SPIN OFF
In 1980 a spin-off of Charlie’s Angels was created called ‘Toni’s Boys’, which featured a wealthy widow running a rival detective agency staffed by three good looking male detectives. Only one episode ever got made.

WHO’S BOSLEY?
In Charlie’s history, multiple characters named Bosley have aided the Angels.  The role was originally portrayed by David Doyle in the 70’s series and by Bill Murray in the 2000 movies. This time around, the agency is run by at least a trio of people named Bosley — played by  Patrick Stewart, Djimon Hounsou & the movies director Elizabeth Banks.

DON’T CALL ME ANGEL
Ariana Grande has produced the soundtrack for the film. The first single, “Don’t Call Me Angel” featuring Ariana Grande, Miley Cyrus and Lana Del Rey is out now. Other artists collaborating on the album include Normani, Kim Petras, Chaka Khan & Nicki Minaj.

GOOD MORNING ANGELS
John Forsythe, who voiced Charlie, the Angels’ enigmatic & never seen boss in both the ’70s TV series and the 2000s films, passed away in 2010. But director Elizabeth Banks has teased a solution. “The voice will sound very familiar to you… We tried to emulate John Forsythe’s voice as best as we could. We want a real sense of continuity in the movie.”

GIRL POWER
“It was important to me to make a movie about women working together and supporting each other, and not make a movie about their romantic entanglements or their mother they don’t call enough” explained director Elizabeth Banks about the new ‘Charlies Angels’ movie, When I’m at work, I don’t talk about those things. I get on with my job. It felt important to do that for the Angels, to treat them with the respect their skill set demands.”

CHARLIES ANGELS is at Irish cinemas from Nov 29th