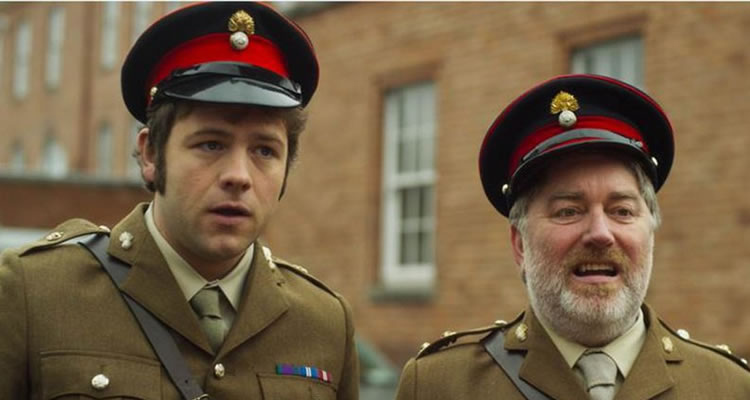 THE FLAG (Ireland/12A/85mins)
Directed by Declan Recks. Starring Pat Shortt, Moe Dunford, Simone Kirby, Ruth Bradley, Brian Gleeson.
THE PLOT: Harry (Pat Shortt) is having a run of bad luck; first he gets fired, then his hamster dies, then his father follows suit. Returning home for the funeral, Harry strikes up with his old friend Mouse (Moe Dunford), and discovers a statement from his grandfather claiming to have hung the flag at the top of the GPO at Easter 1916. To earn back some respect for his family, Harry decides to break into the Army barracks where the flag was last seen, and steal it back for the people of Ireland. If only things were so simple.
THE VERDICT: ‘The Flag’ is a comedy crime caper that relies heavily on the caper side of proceedings, and even though it is fairly clear that there is very little in the film that is ill-intentioned, some of the stereotypes of both English and Irish people feel very outdated.
Pat Shortt leads the cast as the luckless Harry, and is warm and charming in the role. The performance from Shortt feels natural and real, and he interacts well with the rest of the cast; Mouse the hamster included. Moe Dunford makes Mouse – the person that, presumably, the hamster was named after – charming and talkative, and although he spouts faux-Taoist spirituality, he is quite funny and warm. The rest of the cast features Simone Kirby, Peter Campion, Brian Gleeson, Sorcha Cusack and Ruth Bradley, whose Yorkshire accent is rather questionable at times.
The screenplay, written by Eugene O’Brien, seems harmless on first glance; a silly caper that ties into the national commemorations of the 1916 Rising earlier this year, but although the movie is over the top, sometimes funny and faintly ridiculous, the stereotypes that the film enforces are somewhat troubling. English people, for the most part, are portrayed as liars and thieves, and the Irish characters play up the paddywhackery to get away with their theft. There are some lines of dialogue at the end of the film that try to make up for these old-fashioned ways of portraying the two neighbouring nations. The comedy mainly comes from Pat Shortt, and he does a rather good job of keeping the film light, but capers aside, there is little to enjoy in the script.
As director, Declan Recks – fresh from his drama ‘The Truth Commissioner’ earlier this year – keeps the pace of the film moving, and plays up the physical, outlandish comedy in the film. The film moves along nicely, and the love story feels only slightly shoe-horned in, but there is little in the film that shows the English or the Irish in a favourable light.
In all, The Flag’ seems to be a well-meaning caper comedy, and there are moments of greatness from Pat Shortt, both in terms of his comedy and the light touch he portrays Harry with, but there are some troubling stereotypes in the film, dodgy accents and, when it comes down to it, not that many actual laughs.
RATING: 2.5/5
Review by Brogen Hayes