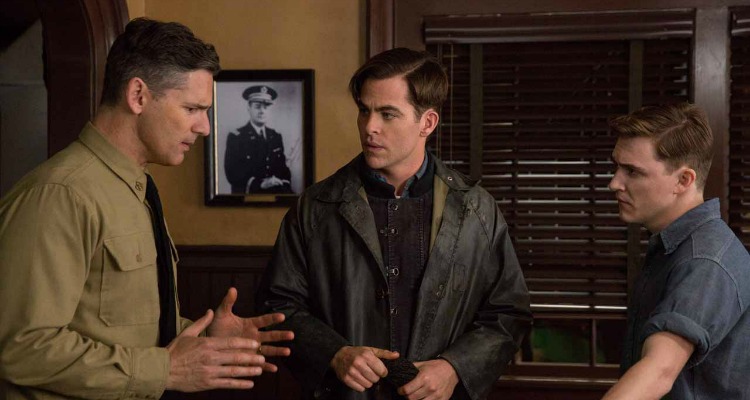 Eric Bana is Warrant Officer Daniel Cluff, Chris PIne is Bernie Webber and Kyle Gallner is Andy Fitzgerald in Disney's THE FINEST HOURS, the heroic action-thriller based on the extraordinary true story of the most daring rescue in the history of the Coast Guard.

THE FINEST HOURS (USA/12A/117mins)
Directed by Craig Gillespie. Starring Chris Pine, Casey Affleck, Ben Foster, Holliday Grainger, Eric Bana, John Ortiz.
THE PLOT: In February 1952, a blizzard hit the coast of Cape Cod. Two tankers split in half during the violent storm and Bernie Webber (Chris Pine) was part of a four-man crew sent out to try and rescue the crew of the stranded stern of the SS Pendleton.
THE VERDICT: ‘The Finest Hours’ is based on a remarkable true story; what kind of rotten fate deals the coast guard two tankers that split in half in one night!? The story focuses on Chris Webber – played by Chris Pine – the man who took charge of a tiny vessel that ultimately performed the greatest small boat rescue in US history.
Chris Pine leads the cast here and, like many of the characters, Bernie Webber is drawn broad and thin so as to be heroic but not all that remarkable. Pine brings charm to the role however, removing him from the more arrogant and over the top roles we are used to seeing the actor in. Casey Affleck leads the cast on the doomed SS Pendleton, as Ray Sybert, an engineer who manages to keep the stern of the shop afloat for several hours after the ship breaks apart. Affleck makes Sybert the strong and silent type, and this again is a change of pace for the actor, although he doesn’t have a lot to do on an emotional level. The rest of the cast features Holliday Grainger, Eric Bana, Ben Foster, John Ortiz, and Rachel Brosnahan.
Scott Silver, Paul Tamasy and Eric Johnson’s screenplay is based on Casey Sherman and Michael J. Tougias’ book of the same name, but doesn’t seem to want to flesh the characters out, nor make them anything more than carriers for the story. Since it is fairly clear that this story is going to have a tense journey but a happy ending, this is not surprising, but it is a little disappointing to see the lead female role reduced to worrying about her man, and none of the coast guard or sailors given much to do. Also, having the sailor who consistently sings “Sit Down, You’re Rocking the Boat” (from ‘Guys and Dolls’) be the one that dies a horrific death is rather on the nose.
‘The Finest Hours’ is director Craig Gillespie’s third film for Disney after ‘Fright Night’ and ‘Million Dollar Arm’ – but doesn’t really make a mark on this film, instead it seems to be the waves and the CGI that direct the film, with Gillespie ramping up the tension now and again. Splitting the focus between the stricken ship and the coast guard seems like a good idea in terms of narrative, but it splits attention, and with another ship broken apart just miles away, it seems that this could have been included more in the film, although it has less of a happy ending.
In all, ‘The Finest Hours’ is a rather broad but serviceable disaster movie with a happy enough ending. The characters are less people than they are vessels to move the story forward, but there is some adventure to be had with the sea faring scenes. The scale of the rescue is what makes the film work, but more fleshed out characters would have made for a stronger film overall.
RATING: 3/5
Review by Brogen Hayes