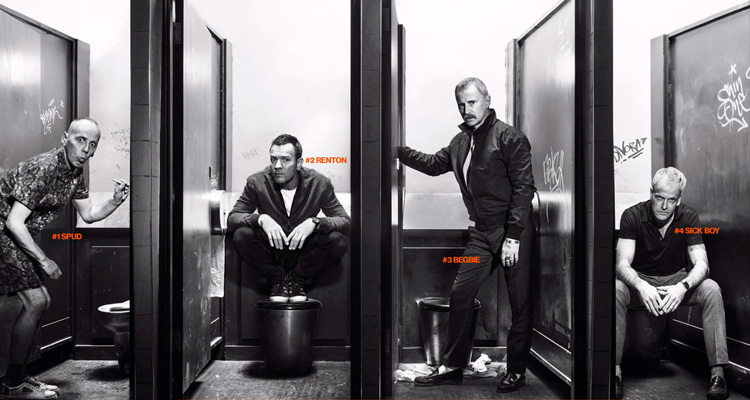 T2 TRAINSPOTTING (UK/18/117mins)
Directed by Danny Boyle. Starring Ewan McGregor, Ewen Bremner, Robert Carlyle, Jonny Lee Miller, Kelly Macdonald.
THE PLOT: Twenty years after he stole his friends’ money and vanished, Mark Renton (Ewan McGregor) returns to Edinburgh, Immediately saving Spud (Ewen Bremner) from a suicide attempt and reuniting with Sick Boy (Jonny Lee Miller) seems to be going well, but what Renton does not know is that Sick Boy has a plan for revenge, and Begbie (Robert Carlyle) has just escaped from prison, and has not forgotten whose fault it is that he ended up there in the first place.
THE VERDICT: Twenty years, it has been twenty years since Renton dived into the worst toilet in Scotland, and Underworld’s ‘Born Slippy’ was played everywhere all the time. ‘T2 Trainspotting’ is another film like ‘Rogue One: A Star Wars Story’; a film that fans of the original didn’t really need, but now that it’s here, are going to have a lot of fun with.
Many of the original cast of ‘Trainspotting’ return; Ewan McGregor, Ewen Bremner, Jonny Lee Miller, Robert Carlyle, Shirley Henderson, Kelly Macdonald and James Cosmo are all back for this new instalment, and all are on fine form, reprising the roles they originated twenty years ago. Robert Carlyle perhaps comes off the best of the bunch, making Begbie a character that has not changed, learned or grown from his time in prison, and is just as angry and violent as he was before. Ewen Bremner makes Spud the emotional heart of the film, since is he so likeable and so lost, and newcomer to the franchise, Anjela Nedyalkova holds her own as Veronika, although it is clear from the outset where her character is headed.
Frequent Boyle collaborator John Hodge has penned the screenplay for ‘T2 Trainspotting’, and obviously has fun with looking back on the past, when Renton and his friends had their whole lives ahead of them and, with their “Choose Life” mantra, believed they were more enlightened and evolved than the rest of the world. It is interesting to see what has happened to the characters over the years between the films – Renton is an accountant at a small business but knows this, as well as his marriage, will not last. Begbie is in prison, Sick Boy is extorting money from anyone he can, and Spud has never managed to get out of the trap of being a junkie, not for long anyway – but almost too much of the film is spent trying to tie these strands together before the real story can get underway. In this way, ‘T2 Trainspotting’ is rather similar to ‘Trainspotting’, while took a while to get moving as well. There is a fascination with nostalgia in the film that works for characters who never really managed to move on and get their lives together, and it gives Spud something to do until the main story figures out where he fits. The dialogue is strong, and the characters endearing, but a stronger story overall, and less focus on trying to make the characters fit in Edinburgh again would have made for a stronger film.
As director Danny Boyle brings the actors back to their characters of the past. Few of them seem to have moved on at all, and it is easy for them to fall back into old rhythms with old friends. Nostalgia tints the entire film, and Boyle obviously has fun with throwing in clips from the first film to tie everything together, but while this is a strength of the film, there are times when this becomes almost too much for ‘T2 Trainspotting’ to take on and still move forward with a new story in its own right. The soundtrack to the film is a lot of fun, however, as are some of the visual touches in the film, which feel old fashioned, but in the right way.
In all ‘T2 Trainspotting’ is a sequel we did not need, but now that it has arrived, is a delight for fans of the original film. The nostalgia factor of the film is fun, but often a little heavy handed, and although the performances in the film are strong, ‘T2 Trainspotting’ does struggle with the same lack of focus that plagued the first film. Still, it’s good to know that Renton, Sick Boy, Spud and Begbie made it through, and it is good to spend time with these elitist misfits once more.
RATING: 4/5
Review by Brogen Hayes