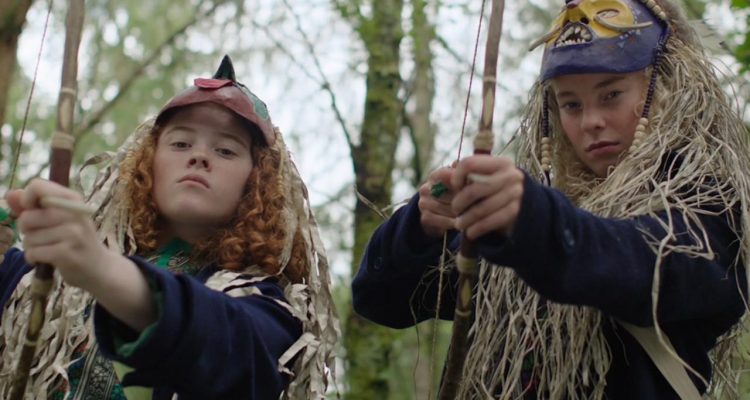 SWALLOWS AND AMAZONS (UK/PG/96mins)
Directed by Phillippa Lowthorpe. Starring Kelly Macdonald, Jessica Hynes, Harry Enfield, Rafe Spall, Andrew Scott.
THE PLOT: In the summer of 1935, the Walker children – John (Dane Hughes), Susan (Orla Hill), Tatty (Teddie-Rose Malleson-Allen) and Roger (Bobby McCulloch) – travel from Portsmouth to the Lake District with their mother for their summer holidays. Fascinated by an island in the middle of the lake, the kids decide to sail out there and make camp, but it is not long before the Walker kids find their claim to the island threatened, and at the same time, find themselves caught up with a very grown up mystery happening on the mainland.
THE VERDICT: ‘Swallows & Amazon’s is a curious film. Reminiscent of the Enid Blyton books, ‘The Railway Children’ and ‘Five Children and It’, this adaptation of Arthur Ransome’s book is beautifully shot, badly acted and never really sure what it is trying to be, or who it is aimed at.
The cast of the film is made up of Rafe Spall as the mysterious Captain Flint – as the kids name him – Andrew Scott, Kelly Macdonald, Jessica Stevenson and Harry Enfield. These are just the adults, and while they do well enough with their generally horrible characters, they are not the main focus of the film. That honour goes to the Walker children, played by Dane Hughes, Orla Hill, Teddie-Rose Malleson-Allen and Bobby McCollough. It seems that either the kids were under directed or we have become incredibly accustomed to outstanding performances from young actors, whatever the case, the kids are wooden and rather unlikeable in their roles as they constantly berate, insult and are rude to one another.
Andrea Gibb’s screenplay reimagines the character of Captain Flint from the novels, and this is where the problems with the film arise. Changing the character from a man writing his memoirs, to a spy hiding from Russia in the Lake District is directly inspired by Arthur Ransome’s life, and may have seemed like a good way to inject some action into the film, but there is a distinct lack of balance between the plot and the subplot throughout the film, and the story ends up feeling more like one of Enid Blyton’s than one of Ransome’s. As well as this, the dialogue is nasty, the characters constantly sarcastic and rude and the pacing is such a mess that the film feels drawn out and dull.
As director, Philippa Lowthorpe has delivered a beautifully shot film that is populated with whining and under-directed child actors and adults who are seemingly angry at life, while pacing the film terribly, and never managing to make the film sure of who it is aimed at. Nostalgic adults or kids bored of playing on iPads? It’s never clear, and this is an issue.
In all, ‘Swallows & Amazons’ is not quite sure what it is trying to be, or who it is aimed at. The film is beautifully shot, but populated with irritating and unlikeable characters, and has a sub plot that drifts in and out of the film seemingly at will.
RATING: 2/5
Review by Brogen Hayes