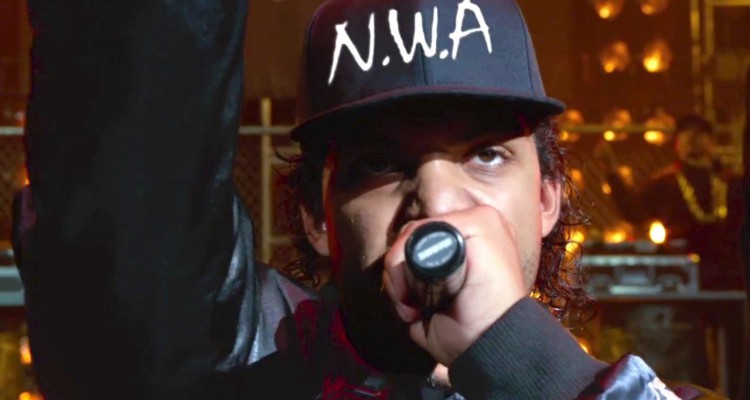 STRAIGHT OUTTA COMPTON (USA/16/147mins)
Directed by F. Gary Gray. Starring O’Shea Jackson Jr., Corey Hawkins, Jason Mitchell, Neil Brown Jr., Aldis Hodge, Marlon Yates Jr., R. Marcos Taylor, Carra Patterson
THE PLOT: In the late 1980s, hip hop group NWA emerged from the Compton California and not only captured the voice of disenfranchised African American youth at the time, but went on to become some of the biggest selling artists of all time.
THE VERDICT: STRAIGHT OUTTA COMPTON is named after the first NWA album, which sold over three million copies, and was former group members Ice Cube and Dr. Dre worked with the filmmakers as co-producers.
The cast includes Ice Cube’s son O’Shea Jackson Jr playing his father, Corey Hawkins as Dr. Dre, Jason Mitchell as Eazy-E, Neil Brown Jr. as DJ Yella and Aldis Hodge as MC Ren. Paul Giamatti also turns up as the group’s former manager Jerry Heller. The cast do well with the roles they are given; Jackson Jr’s performance as ice Cube is sympathetic and intimidating at the same time, Hawkins makes Dre the driving force behind the group and Paul Giamatti, fresh from playing a corrupt manager in LOVE AND MERCY, takes on the mantle again.
With Dre and Ice Cube on board as directors, the group were almost always going to come out of the film looking good, but Jonathan Herman and Andrea Berloff’s screenplay makes them feel relatable and real, as well as the heroes of their own particular tale. The story carefully shows the drug addled, corrupt and violent place that Compton was in the 1980s, with some of the police brutality shown on screen coming off as shocking and vicious. This gives context to the film and the world that the artists came from, but once the film moves away from this opposition, and opposition begins to come from within the ranks, things get messy and much less focused.
Director F. Gary Gray has been quiet since his last cinematic outing with Law Abiding Citizen, but returns to tell the story of NWA; perhaps because he has worked with many of these artists in the past – most memorably, Ice Cube in Friday, which is given a nod in the film. The film is strong to begin with; the audience is given a sense of the time and place that gave rise to NWA calling themselves such, their need to do something with their lives, and their protest song ‘F*** Tha Police’. This takes up the first half of the film, leaving less time to tell a longer story and, once the group begin to go their separate ways, the film struggles to hold everything together. That said, the performances are strong, the soundtrack is killer and although we know these people are not angels, the film makes sure audience sympathy is with them. As well as this, the film captures the energy of NWA’s first album, and it’s infectious.
In all, STRAIGHT OUTTA COMPTON is not a film just for the fans; this is an underdog tale, well told. There are times when the film feels messy and, at 2 hours 20 mins, far too long, but it hard not to root for these young artists who pulled themselves up by their bootstraps, and made some mistakes along the way.
RATING: 3.5/5
Review by Brogen Hayes