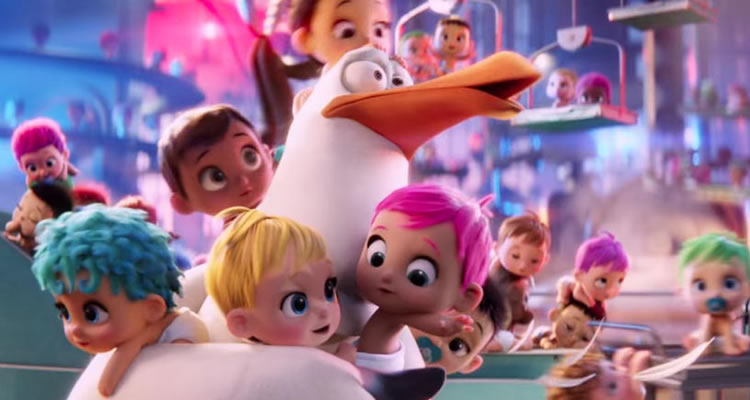 STORKS (USA/G/87mins)
Directed by Nicolas Stoller, Doug Sweetland. Starring the voices of Andy Samberg, Katie Crown, Kelsey Grammer, Jennifer Aniston, Ty Burrell, Danny Trejo, Stephen Kramer Glickman.
THE PLOT: Their baby-delivering days a thing of the past, Stork Mountain is now a feathered drone courier service, where Junior (Samberg) is all set for the big promotion. Once, that is, he finally delivers that old package that’s been gathering dust in the corner. The package called Tulip (Crown), a somewhat accident-prone orphan who has yet to be dropped on the doorstep of his loving family. Couple that with a letter from a hopeful only boy to Stork Mountain, seeking a baby ninja brother, and, once a few wires have been crossed, and Junior teams up with Tulip, you’ve got yourself a buddy-buddy, on-the-road, on-a-mission-from-god kinda comedy thingymajig.
THE VERDICT: As more and more animation studios realise the crass, bang, wallop approach of DreamWorks leads to a short, sharp shock at the box-office, we’re living in a time when every new cartoon at the multiplex feels like a child of Pixar and Looney Tunes. And sometimes, as can occasionally happen with kids, the offspring is every bit as good if not better than the parent.
There’s a sense that the teenagers have taken over in computer animation, a young breed keen to break out and have some subversive fun taking their cues as much from ‘South Park’ as Disney. Even Disney are at it.
Having the likes of Andy Samberg, Jennifer Aniston and Kelsey Grammar as your voice talent helps, but the smarts in Storks really belong to the people behind the scenes. Producers Phil Lord and Christopher Miller gave us 2014’s sublime ‘Lego Movie’, whilst writer and co-director Nicolas Stoller hails from Apatowland and his co-helmer Doug Sweetland is a Pixar veteran.
Fittingly enough, ‘Storks’ is a little bundle of hilarious.
RATING: 4/5
Review by Paul Byrne