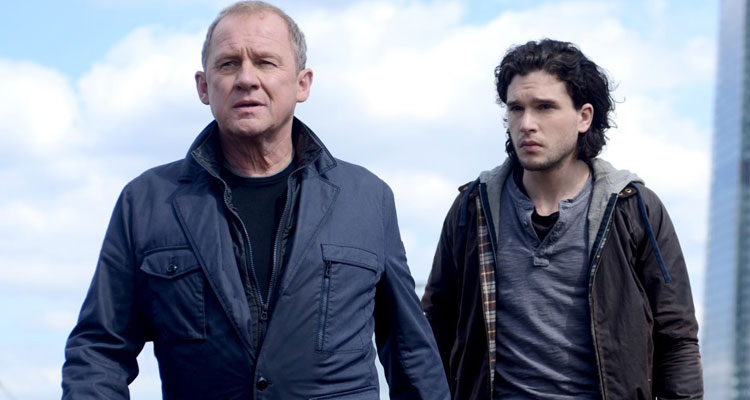 SPOOKS: THE GREATER GOOD (UK/15A/104mins)
Directed by Bharat Nalluri. Starring Kit Harington, Jennifer Ehle, Tuppence Middleton, Elyes Gabel, Lara Pulver, Peter Firth, Tim McInnerny.
THE PLOT: After a terrorist escapes custody in London, former MI-5 agent Will Holloway (Kit Harington) is drawn back into the intelligence world, and teams up with the former Head of Intelligence for MI-5 to track down the terrorist, before he has the chance to stage an attack on London.
THE VERDICT: BBC TV show SPOOKS ran for 10 seasons and is syndicated around the world, SPOOKS: THE GREATER GOOD picks up where the TV show left off, and draws everyone back in for one last mission. Although this would make it seem that this is a movie for fans of the TV show, there is enough exposition and back-story given that newcomers to the franchise have enough to care about, and can root for the characters.
Kit Harington joins the crew as a former MI-5 agent who was given the boot for not being good enough. Of course, when things go bad, he is brought back into the fold. Harington does fine in the role – he is not actually given a lot of emotion to work with – and ably carries the action scenes. Peter Firth reprises his role as Harry Pearce, and brings a sense of familiarity to the proceedings. Firth forms a rather endearing mentor relationship with Harington, and although there is double cross after double cross, the two have strong energy together on screen. Tuppence Middleton rounds out the central trio and, although she doesn’t have a whole lot to do, at least there isn’t a love story thrown in for the sake of it, and her character is given room to grow. The rest of the cast is made up of Alyes Gabriel, Jennifer Ehle, Lara Pulver and Tim McInnerny.
The story, written by Jonathan Brackley and Sam Vincent, does not seem to have an awful lot to do with the TV show, and this is both to the film’s strength and detriment. Fans are sure to want to see characters they love on screen, and not killed off in the opening act, but this does allow for new fans to be brought on board. The film is filled with exposition, but it is done as subtly as possible, in order to catch the audience up, and keep the story moving. The film struggles, however, in making itself anything other than a generic spy film, even though it has so much of the TV show to draw from.
Director Bharat Nalluri keeps the film well paced, and the set pieces are well constructed and thrilling, but once the film has to stand on its own two feet, it has difficulty distinguishing itself from a drawn out episode of 24, or the preamble to a Bond film.
In all, SPOOKS: THE GREATER GOOD carefully caters to both fans and newcomers, but has difficulty in making itself anything other than a decent enough spy thriller, with yer man from Game of Thrones in it. Fans are sure to be disappointed, and newcomers may not be fully inspired to check out the TV show that started it all.
RATING: 3/5
Review by Brogen Hayes