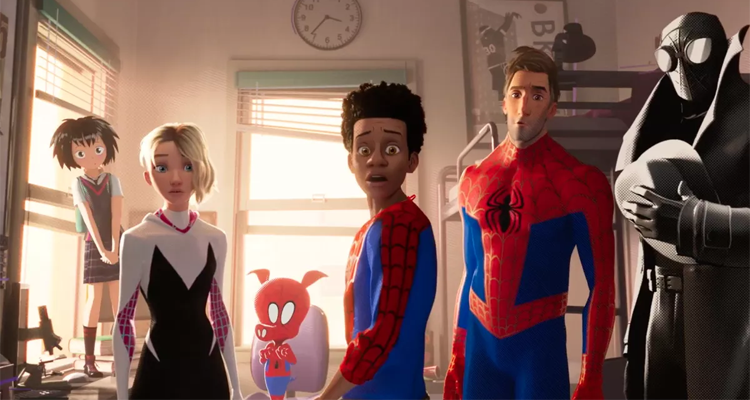 SPIDER-MAN: INTO THE SPIDER-VERSE – Interview with Bob Persichetti and Shameik Moore

‘Spider-Man: Into the Spider-Verse’, now showing in Irish cinemas, is a new animated movie with a ground-breaking visual style. The film introduces Brooklyn teen Miles Morales & the limitless possibilities of the Spider-Verse, where more than one can wear the mask.

We caught up with directors Bob Persichetti and star Shameik Moore to talk about the new Spider-Verse.

Shameik what is it like playing like Miles? I looked it up he was introduced in 2011 and you would have been 16 and he’s around that age did he pop up on your radar?

Shameik – Yes that’s exactly it. That’s crazy I would have thought I was younger when I saw him, but yeah I saw Miles on television with my older cousin. Long story short it was amazing seeing somebody like me on television animated but I don’t just mean like black. I had the buzz cut, I had everything. I just felt he looked like me and I looked like him and I was like wow you know?

Yes because he’s of a Latino background and you have your Jamaican background. You’re both hybrids, you’re of two societies so was that another kind of kinship?

Shameik – Definitely, definitely that. Like I have a creative soul I think Miles does too.

The opening shot of you (Miles) singing, very nice.

Bob – There’s a whole other conversation about songs haha.

Did the director make you sing Shameik? This is a safe space.

Shameik – Hahaha well the song is in a different pitch.

That was not poorly.

Bob – Yeah Shameik doesn’t do that so he had to coaxed into singing less well.

That was not poorly it was very well done.

So Bob you’ve worked on so many animation projects I couldn’t believe it when I saw it. There’s Hercules which oh my god I adore.

Bob – I was literally a boy when that happened I went into that straight out of CAL Arts.

So what was it like going from the in-between animator in that to the director of Spider-Man: Into the Spider-Verse where you get to introduce the cinematic version of one of the most iconic characters in Marvel history? Not counting the fact Miles has only been around for 7 years.

As well as 140 animators

Bob – It wasn’t even 140 at the end we had 172 animators which meant I would spend whole days looking at nothing but animation. So I’d have to review all this and give notes and then by the end of the day new notes come in because there’s just so much going on. It was a blur, but I think my whole career prepared me to make a movie that can be a big blockbuster type movie but is also so character driven because what people are responding to is this character that Shameik imbodied which was Miles and we tried to make the movie as intimate and subjective to Miles as a character as we could so you cared. The Spider-Man and the Spider-Verse elements are in a sense bonuses because you’re involved emotionally with Miles.

So Bob Miles has such a great rapport with all the characters he interacts with how did you record it? Was everyone in the same booth together or was it separate?

Bob – We did a couple different ways obviously with animation sometimes when you’re recording multiple actors at the same time you can overlap and you can end up losing some quality. Other times though you can get overlap and it can feel incredibly lively and natural. We recorded Shameik with Jake (Johnson) a couple of times and then more specifically Brian Tyree Henry because they were both in Atlanta at the time. We recorded that whole ride to school scene together with the two of them literally sitting in the same positions but with mics. We set it up like the car.

Shameik – He was trying to strangle me by the end of it.

Bob – There was a real father/son thing going on in there it was something.

Shameik – He was like I’m going to come back there and strangle you Shameik. Can I strangle him!?

So what has the journey been like? I know you guys were at MCM Comic-Con. What was that atmosphere like? I always find it fascinating for actors because they get to meet people, especially kids who adore these characters and now get to meet that character in person so what was it like for you Shameik?

Shameik – That question, I wish I could accurately explain what it feels like but when I’m looking at it it feels like a movie. For me this is my first time in London, this is my first real London experience and Sony brought me out here and I head to Comic-Con and there are all these interviews and all these people know facts about me and I’m like wow. For one thing, you guys seem far more prepared for interviews than interviewers in America.

Shameik – And looking at the kids and their expressions was wild because we went on stage and I could hear my voice.

Bob – Yeah the publicity set up was amazing. We were at the Leake street tunnels and it was truly something.

Shameik – And then going to Comic-Con afterward was so wild because I saw so many Spider-Men and Miles Morales and Gwens.

Bob – From my perspective, we’ve been working on this movie for 3 years and it’s been a really interesting ride and I’m just starting to lift my head up and see that people are really responding to it in really positive ways. Aw, thank god this is really rewarding. 3 years of our lives and we were just saying each day how can we do it better? How can we do something unexpected same as how we introduced Miles as a character for people who aren’t familiar with the comic?

There is an element of risk to it.

Bob – Totally and we just tried to pursue something that felt really fresh and unique and was seen through the eyes of Miles. Each character has their own playlist and when you start to hear the music in the film that gets represented really well.

You’ve made a really good soundscape. My particular favourite is Prowler. The noise he makes as he’s running and attacking.

Bob – Do you want to know what that noise is?

Yeah, I really do. Is it an actual jaguar?

Bob – It is funny you say jaguar because it is not a jaguar. You are going to trip out when you find out what it is. So we had a scratch version of the Prowler sound and then our composer Daniel Pemberton who is a local from London came up with a sound that is from an elephant.

Bob – I think you can tell we had a lot of fun in creating him.

Plus Prowler is basically the Green Goblin to Miles’ Spider-Man and I wholeheartedly believe the film will treat that relationship with respect.

Bob – 100% as I said this is Miles journey and so everything that fans love we respectfully adapted.

So how difficult was it to choose the Spider-People to fill out your cast?

Bob – If we could have made a 3-hour movie we would have. We introduced characters that we felt would help Miles realise his potential as Spider-Man. It’s funny because everyone asks who’s your favourite Spider-Man and so we take out Miles because it would be him. So I just go Spider-Man Noir, I have a real soft spot for this pulpy, edgy character.

And finally Shameik this is a funny question but what is it like to know there are toys of you?

Shameik – Dude, I’m going to be in Walmarts, Targets and everywhere.

You’re going to be signing Funko Pops for the rest of your life.

I was in Forbidden Planet and there were Funko Pops.

Already. One’s in his suit and one’s his made up suit.

Bob – You’re seeing things that even I haven’t seen yet.

I’m just lucky. Guys, it’s been an absolute pleasure thank you so much.

SPIDER-MAN: INTO THE SPIDER-VERSE is now showing in Irish cinemas