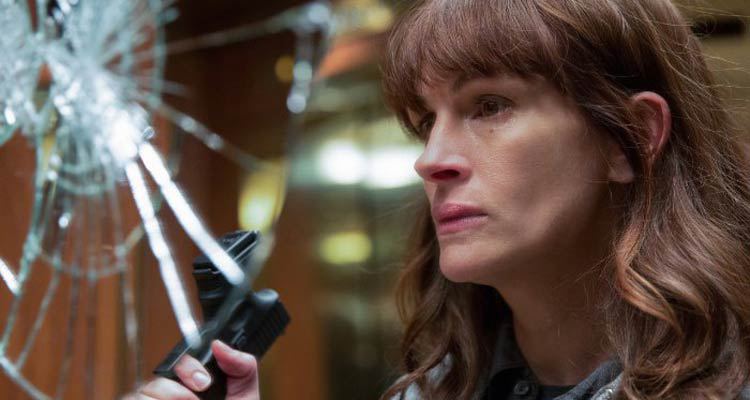 Secret in Their Eyes

SECRET IN THEIR EYES (USA/15A/111mins)
Directed by Billy Ray. Starring Julia Roberts, Nicole Kidman, Chiwetel Ejiofor, Dean Norris, Michael Kelly.
THE PLOT: Not long after 9/11, Ray (Chiwetel Ejiofor) and his colleagues at the Counter Terrorism Joint Taskforce in LA are tasked with keeping an eye on a mosque in the city. When a woman’s body is found in a dumpster by the mosque and it turns out the be the daughter of one of the team, obsession and the quest for justice take the team over.
THE VERDICT: ‘Secret in Their Eyes’ is a remake of a 2009 Argentinean film of the same name. Now, however, with the excellent Denis Villeneuve film ‘Prisoners’ so fresh in our minds, this remake feels a lot less fresh than it could.
Chiwetel Ejifor leads the cast as Ray; a tenacious man who is friends with the mother of the slain girl, and more than a little in love with one of his colleagues. Ejiofor does what he can with the role, and does his best to hold the film together and keep it engaging, but he is fighting against a script that feels familiar and underwritten at times. Nicole Kidman plays Claire – the woman Ray is so infatuated with – and actually has rather little to do, until one climactic scene that she manages fine. Julia Roberts plays jess, the mother of the murdered girl. Roberts’ performance is uneven but mostly relatable as she swings from hysteria to shock to rage over the death of her daughter. Alfred Molina, Dean Morris and Michael Kelly feature also.
Although the screenplay is based on the 2009 Argentinean film, a lot of the details and intrigue of the film has been changed or simply removed. Elements remain, but in moving the setting to the US, much has been lost along the way. The dialogue of the film is unremarkable, and many scenes and scenarios feel drawn out and uneven. As well as this, the tension of the film only rises in the final scene, making the events that went before seem flat and meandering.
Director Billy Ray coaxes solid enough performances from the cast of Secret in Their Eyes, but there are times when motivations seem fuzzy and meandering, which means it is hard to root for any of the characters in the end. The pacing of the film feels sluggish for much of the time, meaning everything feels like it takes an age to happen. That said, there is almost enough in Secret in Their Eyes to keep the audience engaged, although many will be wishing for the film to get a move on, and for an awkward scene involving Kidman’s sexuality to be cut entirely.
In all, ‘Secret in Their Eyes’ is a thin remake of an Oscar winning film. The cast do their best with the chances they get, but the film is uneven, badly paced and lacks atmosphere. ‘Secret in Their Eyes’ could have been an engaging thriller, but it lacks substance, strength and an engaging screenplay.
RATING: 2.5/5
Review by Brogen Hayes